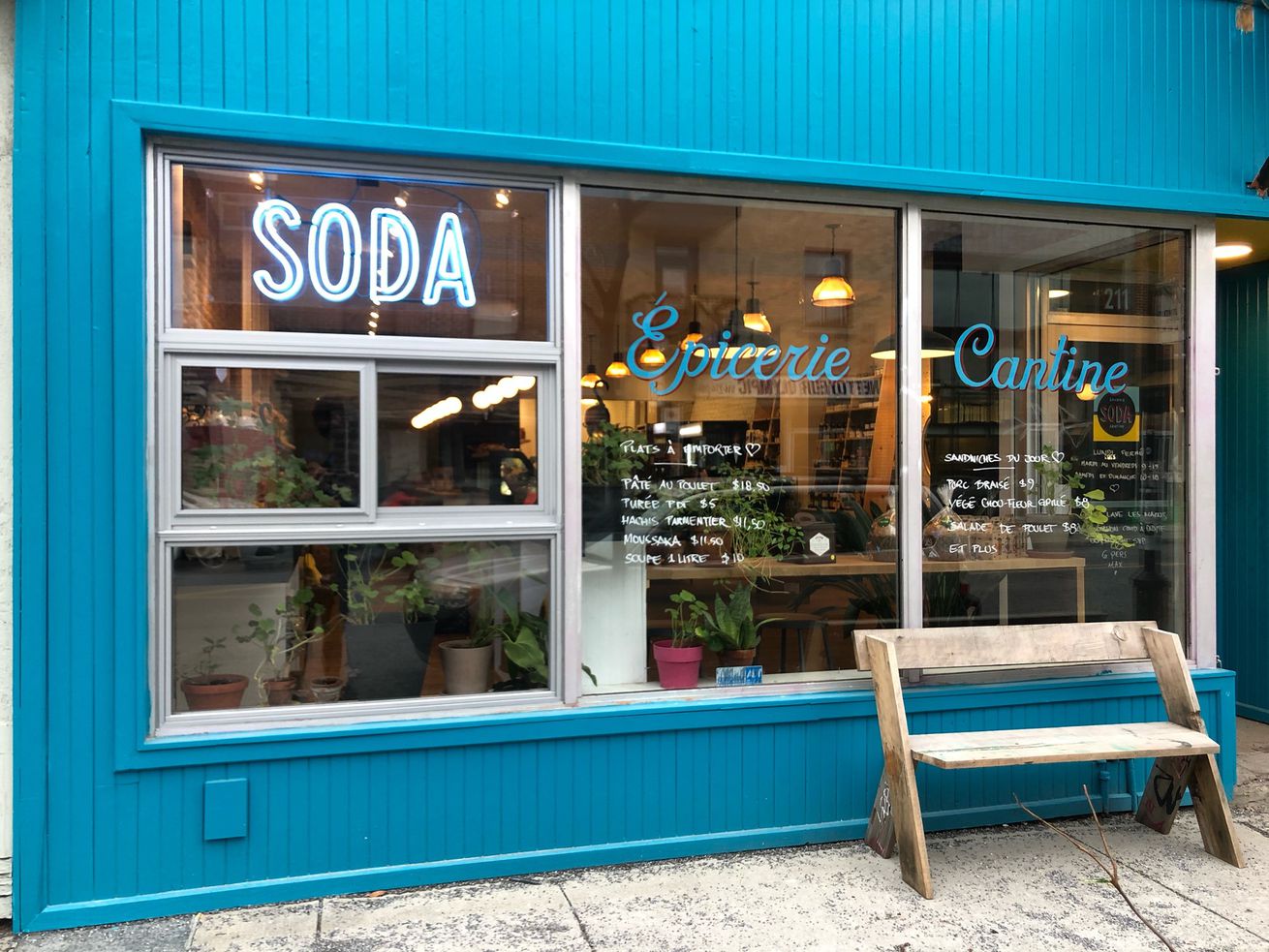 Dominique Goupil longed for a new neighbourhood hangout spot near her home in the southern edge of Little Italy. So when the fruiterie down the block, on Beaubien and Casgrain, closed down and the space went up for rent, she decided to build it herself: That’s how Soda Épicerie, a grocery-store-plus-café, with counter seating for twelve and ample space for a terrasse in non-pandemic times, was born.

Soda Épicerie was intended to open in April, but between COVID-19 and a surprise during renovations — a mystery brick wall, unearthed in the back of the shop — it shifted its soft opening to early December. Since that time, it has been operating on a strip of Beaubien East now bursting with salons, pharmacies, fruiteries, and cafés.

Goupil, a painter and once owner of Villeray café Le Petit Brûloir, is joined by co-creator and TV producer Derek Kennedy; partner Martin Lamirande, a fellow restaurateur and front-of-house veteran from Le Magnifique and Holder; and chef Dominic Lefranc, formerly of Holder and Dominion Square Tavern. Visitors will see Lefranc in the open kitchen, preparing some of the “bouffe-maison” meals: comforting casseroles, velouté soups, and grilled vegetables are constants on the takeaway menu. Goupil’s jarred homemade tomato sauce with pork and spicy Italian sausage sits on the shelves and in the window display, artfully posed next to ceramic cups by Caroline McClish.

The care Goupil and the team have put into the épicerie is evident, from the old-school washbasin with floral-herby soaps to use before entering, to the shelves laden with local and organic products: mustards, ketchups, and preserves from Le Conserverie in Ste-Adèle; maple syrup from Larguer les Samares; Gutsy kombucha; pork products from Kamouraska’s Fou du cocoon; and a selection of grains, cereals, and drinks from a range of local producers. The big guys are here, too: Chuck Hughes oils and condiments, as well as Stefano sauces, pastas, and frozen pizzas.

Customers can expect daily sourdough bread and pastries from Toledo on Mont Royal, ZAB coffee from Paquebôt, and floral bouquets from Mélanie Blanchette’s (Bouillon Bilk) new florist project, Leslylas. The commitment to local businesses extends to the selection of drinks, with a focus on Québec producers, including cider from Frelighsburg’s Choinière orchard and wine from Vignoble des Pins in St-Anne de Sabrevois. Cans of non-alcoholic Mate Libre — for those wanting a more natural buzz — are tucked away in the cooler, too.

The menu changes daily, with a variety of sandwiches and side salads: a recent visit saw a vegan fried eggplant sandwich, and corned beef with pickle for carnivores. As Soda’s clientèle expands, the menu will as well, Goupil says, adding that they are eager to learn more about what those living in the neighbourhood like to eat.

“I want a place that will really be part of the neighbourhood, with good food, good bread, flowers, and simple, homey meals,” Goupil says. “Sure, those living in the area can always go to the Jean Talon market, but that’s more of an excursion to some. Here, they can get everything they need in one spot.”