On the face of it, a brick and mortar greengrocer opening up on the main street of a small town shouldn’t necessarily bring the word “innovative” to mind. Time was you could take it for granted that you’d be able to pick up tonight’s supper downtown. It’s been fifteen years since fresh produce was regularly available on King Street in Cobourg, while big box stores have proliferated on the edges of town. For those who live “south of the tracks” in Cobourg’s core, the need for fresh groceries downtown has been a frequent topic of conversation in the intervening years. 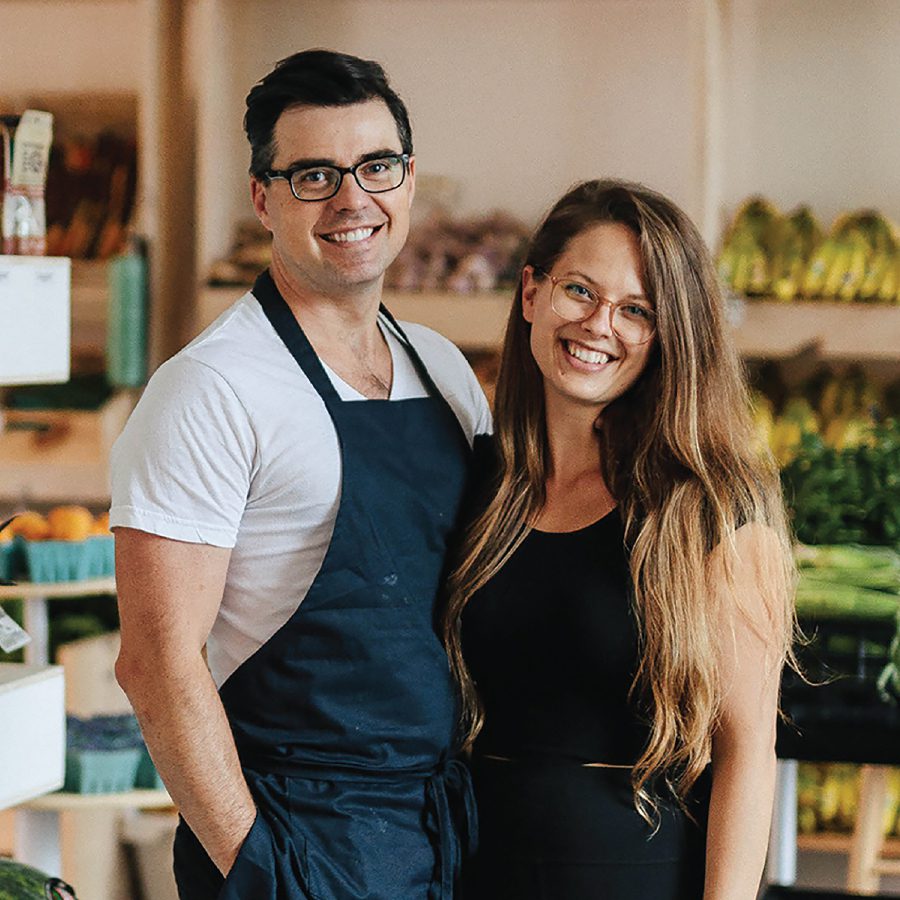 This past winter, that simple longing was fulfilled. Located on downtown’s east end, close to Victoria Park’s popular beach, Market & Smør offers it all: from locally farmed greens to in-season kumquats, from high-end cheeses to vegan sausage, and all beautifully arranged on hand-built wooden crates. It’s a spacious and bright space where the staff have a good memory for faces, and when the doors open in the morning, there’s often a small, yet eager queue waiting on the sidewalk outside.

The produce doesn’t just look good; it may be the freshest in town. But it’s not only fresh produce attracting people, it’s the philosophy of zero food waste, of conscious consumption, and of supporting people who want to make a difference. And then there’s Market & Smør’s gourmet take-away meals, packaged in reusable containers – an assortment of “to-go” meals, salads or cold pressed juices made from ingredients that come directly from their produce aisle – perhaps a fruit or vegetable that might not be the pick of the pile tomorrow – and sent to their commercial kitchen in the back of the store. These creations change daily based on what’s in season, in stock and in demand. And all of this is accomplished without a scrap going to waste.

Partners in business and in life, Lucas Cleveland and Montana Desjardins met in Montreal while working in the restaurant business during their twenties. After moving to Alberta and “working the rigs”, they took off for a year to travel around the world, to refine their values and to experience food markets, restaurants, and flavours from new perspectives.

That year-long trip defined how Lucas and Montana wanted to do business and, indeed, how they wanted to live. They developed an appreciation for other cultures and the food they consumed. They experienced Danish smørrebrød, the fantastic open-faced sandwich that lends the market its name.

But they also saw something more: reduced household food waste because of a culture of frequent shopping. They admired European bakeries and greengrocers where shopping is a pleasure, both in terms of the aesthetic experience and human relationships. They were struck by the interconnected economies of the street markets in Southeast Asia, where food vendors, restaurants and food stalls set up shop beside one another. The food vendors and restaurants buy from the market stalls at the end of the day, using up the surplus produce and the fish and transforming it into something ready to eat.

“It’s ancient,” Montana says. “It sounds new here, but using up food collectively, instead of letting it go to waste, is what has always been done throughout human history.”

After returning home from their round-the-world trip, Lucas and Montana welcomed the birth of their son, made an extended visit to the grandparents in Cobourg, and fell in love with the town. And, Lucas says, they began to see a way to stay: “Everyone we talked to said, ‘we need fresh food in the downtown’”.

In early 2017, the couple held community meetings where they described their vision to an audience that welcomed their concept. That summer, they took over the beach canteen, bringing fresh fruit, smørrebrød, and smoothies to the waterfront. This was just a detour on the path to opening the fresh market they had dreamed of – fulfilling the vision they had described at those first town hall meetings. Finally on Valentine’s Day this past winter, the market opened. Market & Smør was a love letter to the community that encouraged and welcomed their dream. 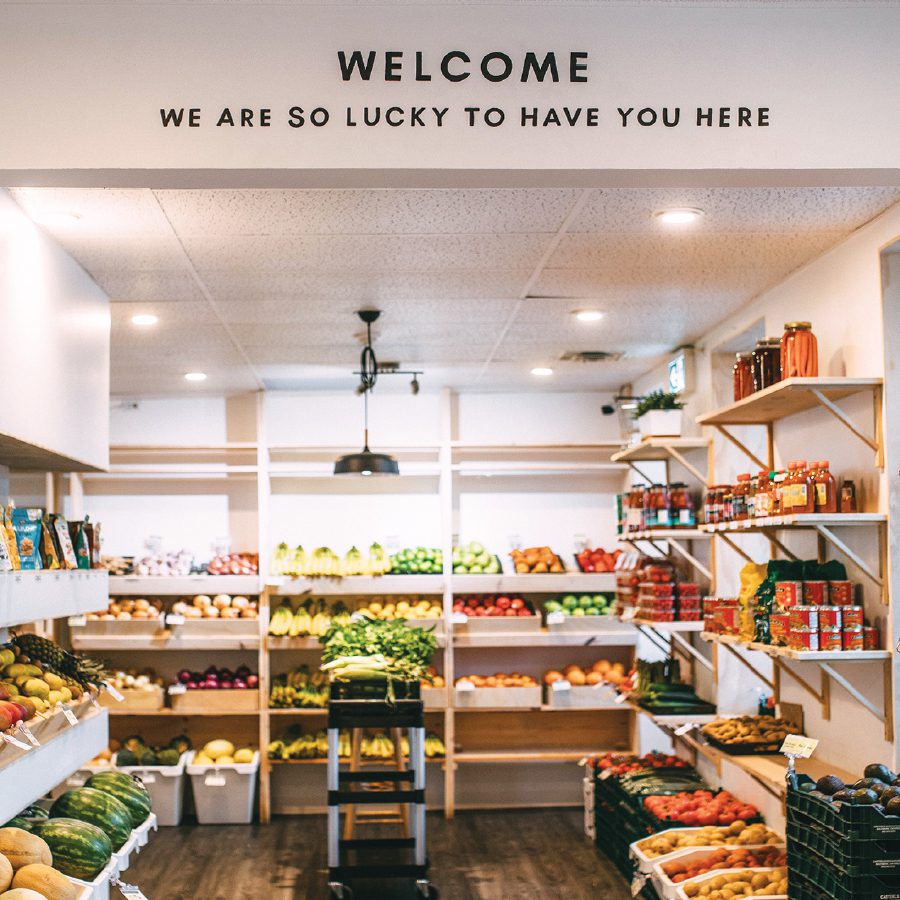 Market & Smør fits Montana’s core values, but it goes deeper than that. She grew up on the East Coast with a single mom who worked hard to put food on the table. Her childhood had a strong influence on the way she and Lucas do business.

“My ‘why’ for all of this,” says Montana, gesturing around her, “is to keep the produce at an affordable price so that children living in lower socioeconomic families can have access to good food. I can’t stand the thought of a child going hungry.”

Pulling food from retail space and using it in a commercial kitchen to sell at a value-added price before it goes to waste actually keeps costs down, allowing the store to offer good quality produce at lower prices than if they were just running a retail store. Montana grins when she says they recently beat a big local box store’s price on lemons.

Lucas and Montana have spent the last few years working towards their dream – renovating an old storefront, learning how to order produce, burning the candle at both ends, and squeezing in precious family time. The immediate response to the opening of the Market & Smør has been positive – community support is growing as are their relationships with their customers. There have been cheerleaders, supporters, the curious and friendly regulars, like the lady who comes in to buy three clementines each and every day.

The couple knew they would win over the Millennials – youths and young families like themselves – for whom the appeal of a zero-waste commitment, Instagram-worthy interior, and the cozy kids’ play corner was an easy sell. But in a town known as a popular retirement spot, they knew they needed the older generation’s patronage as well. Within a few months of opening, they began to see an older clientele carrying wicker baskets in the shop, a couple of whom told them they remembered their mothers carrying similar baskets to market.

“It turns out the older customers already know this kind of shopping. They remember it,” Montana says. “We’ve got kids playing, parents buying good food for their families, and the older generation coming in with their wicker baskets.”

At Market & Smør, everything old is new again.

Explore more ways to eat and drink local in Kawarthas Northumberland below.

Watershed Magazine celebrates life in Northumberland, Quinte and Prince Edward County with page after page of award-winning editorial and design.

Find out more at watershedmagazine.com