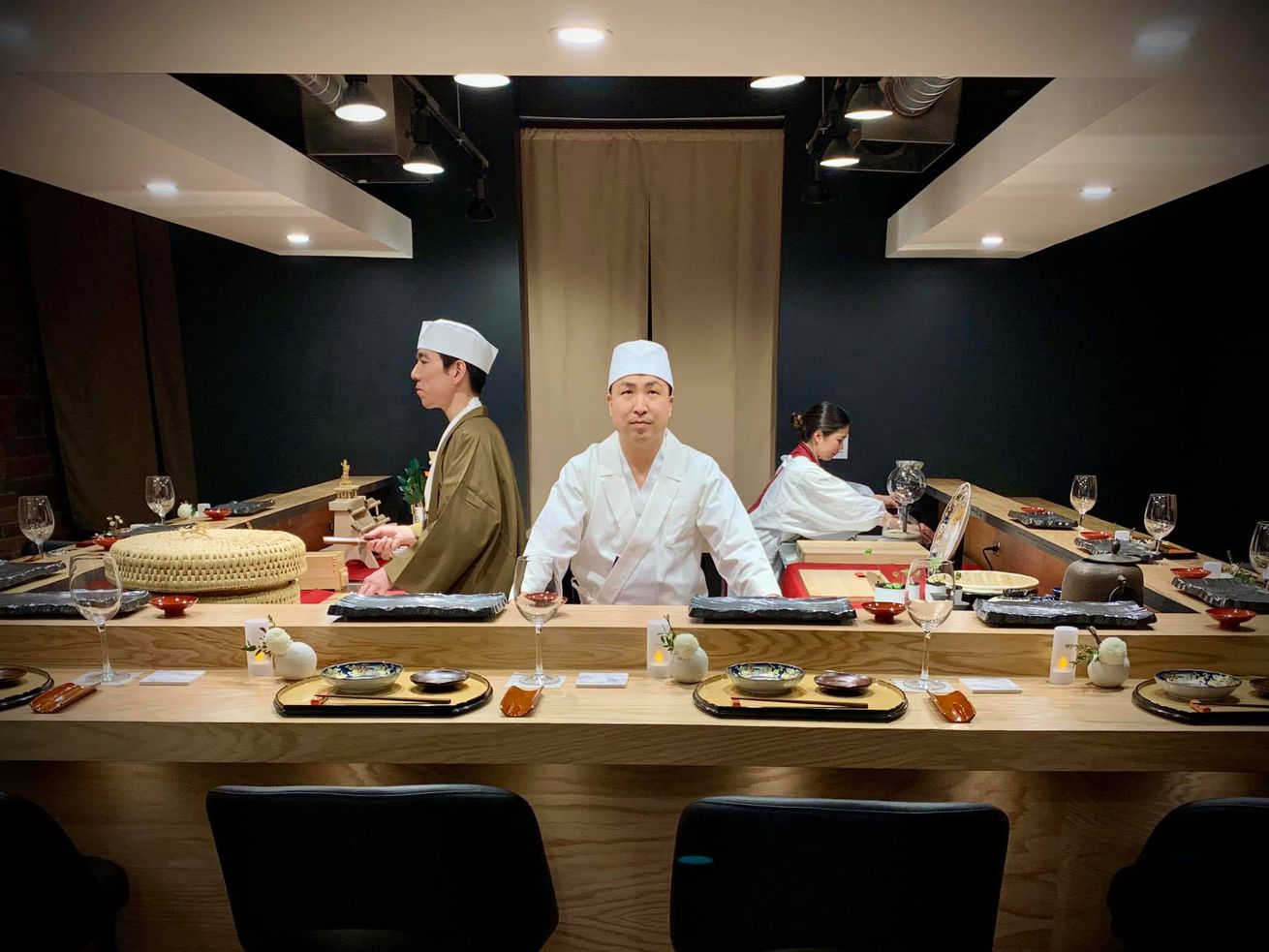 While several Montreal sushi restaurants, such as Park, Ôkini, and Hidden Fish (just a couple doors down), have offered an omakase component, Matsuda says Okeya Kyujiro will be the only one to operate exclusively in the traditional Japanese “leave it to the chef” omakase style of dining.

His version will see approximately 20 customers per night — split in two rounds of 10, all perched around a wrap-around wooden counter encasing chefs expertly crafting dishes from start to finish — for a two-hour, 20-course experience, concluding with a tea ceremony. The restaurant will offer one menu per night coming in at about $150 to $200 per head.

“In Montreal, no one else is doing this, but in Toronto and Vancouver there are many omakase restaurants. That’s why for my first location in Canada I came here,” Matsuda says. Outposts in the two other Canadian cities are nonetheless on the way, with one planned for Vancouver this coming summer, and one in Toronto in winter 2021.

But there was something else drawing Matsuda to Montreal: “When I was younger, I saw a Cirque du Soleil show and I was so impressed that I thought, ‘One day, I want to open a restaurant that is like a live show, showing all the skill behind Japanese food. Customers will see the fish being cut, the rice being cooked, the ginger being grated. Even the sesame will be roasted in front of them. I’m inspired by the performances of Cirque du Soleil; that’s another reason why I chose Quebec.”

The word “theatre” even appears in the Downtown Montreal restaurant’s signage, in front of the building that once housed Jérôme Ferrer’s Europea. It’s preceded by the word “Washoku,” meaning traditional Japanese cuisine, referring to his vision for an elaborate and carefully strewn choreography of Japanese cooking. “To be honest, I’m a little tired of the restaurant business, which is why I wanted to make this more of an art performance,” he laughs.

He’s joined by sake sommelier Kuniko Fujita, who has worked at other Japanese eateries around town, including Marusan, Bistro Otto, and Ôkini, and well-known Japanese chef Hachiro Fujise (formerly Iwashi, Thazard) on the food side. A Japanese pastry chef, some musicians, and a calligrapher are also on board. “And since this is a theatre, I call them the cast,” Matsuda says.

Of course, all of this will have to wait until indoor dining is permitted to resume (and the number of new COVID-19 cases diminishes) in the province. In the meantime, and as of opening night on January 8, Okeya Kyujiro will be selling a limited number of bento boxes for takeout. “It’s limited, like maybe 10, because if we want it to be good food, we cannot make a lot of it,” Matsuda says.