Javanese beef rendang and Balinese roast pork are on the menu

Comprising over 17,000 islands between the Pacific and Indian oceans, 700 languages, and almost 275 million people, Indonesian culture is, indisputably, diverse — and so is its cuisine. A new restaurant in Outremont is committed to introducing some of its foods to the city, one dish at a time.

“A lot of people don’t know where Indonesia is, or anything about the food,” says Renza Munando, the co-owner of a new restaurant by the name of Uluwatu. Chef and co-owner Sabas Herman agrees.

Herman, a Jakarta native and Swiss-trained chef, recently returned to Montreal after a five-year stint working in restaurants in his home country, including the Fairmont in Jakarta and the Bali Mandira Resort in Legian, a popular beach destination. Once a chef at restaurant Nonya (one of the few other spots to get Indonesian fare in the city), Herman wants to showcase dishes from all over the country, starting with Balinese dishes like bebek bengil, a duck infused with an aromatic mix of lemongrass, chilis, garlic, lime leaf, and crisp spiced shredded coconut; and babi guling, roasted crispy pork belly, his personal favourite.

Situated on Lajoie, next door to Tinc Set, the restaurant is named after a Balinese Hindu sea temple perched on limestone cliffs. While the setting on this sleepy street doesn’t have the same spectacular views, the annotated menu offers a panorama of Indonesia’s distinctly spicy, floral, and pungent flavours: Javanese beef rendang, slow-cooked with bean paste and green chili; cumi goreng sambal gami, a fried calamari dish from Borneo with roasted shallots, chili, garlic, and shrimp paste; and barbecue beef short ribs from Sulawesi. Indonesia has the largest Muslim population in the world, Herman notes, but not all Indonesians are Muslim or follow Halal dietary laws, hence the presence of all varieties of meat — as well as tofu and tempeh and at least four different types of rice accompaniments — on the menu. 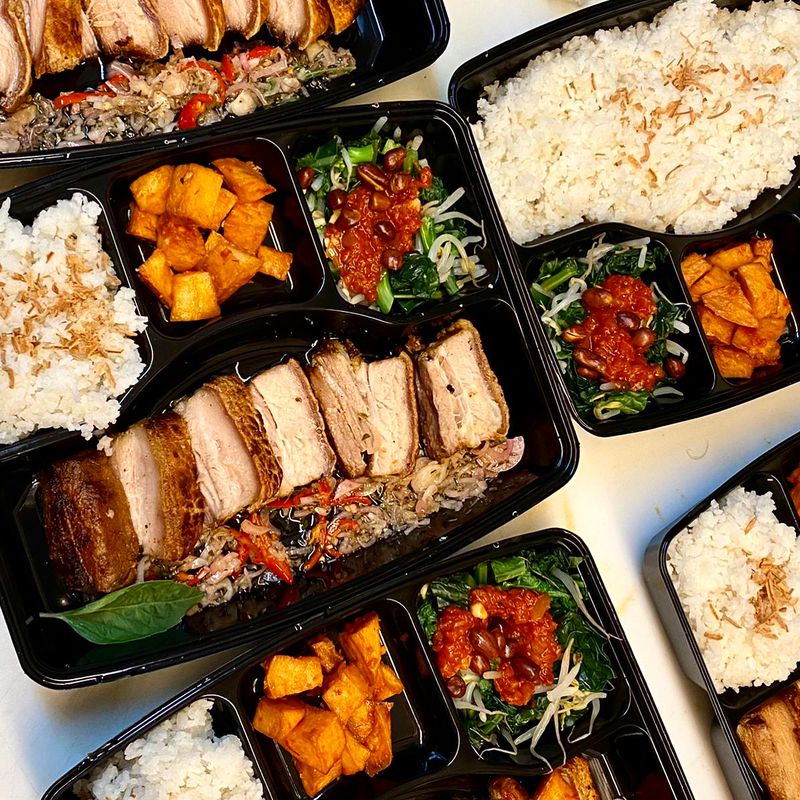 Uluwatu/SuppliedUluwatu’s babi samcanOpen since December, the restaurant has room for thirty inside during non-COVID times, and twenty on the terrasse, once the warmer weather arrives. Herman, Munando and her husband, Herman’s best friend and the third partner (he’s requested to not be named) hadn’t planned to open up mid-pandemic, but when they found the former Restaurant Lajoie up for rent on Facebook Marketplace, the decided the time was right.

Herman and Munando created a menu, including a daily lunchbox for $20, snack and dessert options, soups like laksa, popular satays (chicken or beef), and Javanese vegan dishes like gado-gado (tempeh and tofu with blanched vegetables and pressed rice, served with a peanut sauce) and pecel, a warm vegetable salad with fried tempeh. Dinner options include à la carte selections or a table d’hôte that ranges from $25 to $30, depending on what’s being featured.

For those who want to try Herman’s Indonesian condiments, Uluwatu offers a few pantry of items currently only available onsite: sambal sauces for dipping, with either anchovy or calamari, and two types of peanut-based snacks, teri kacang balado, a crunchy, sweet, and spicy mix of peanuts and anchovies, and tempe kacang, a caramelized mix of crumbled tempeh and peanuts.

Getting the ingredients specific to Indonesian cuisine has required creativity on Herman’s part, but so far he’s managing. Bubur sumsum, a creamy rice flour pudding dessert, is usually made with fresh pandan leaf (Herman buys what he can and makes an extract), palm sugar, and jackfruit, which can be hard to find fresh in Montreal. There’s definitely a crossover between some Thai and Vietnamese aromatics and herbs — Indonesian basil, Herman says, can be replaced with Vietnamese basil, for example — but some products specific to Indonesia like krupuk, a cracker often made with prawn, are elusive. “I bought the last six packages the store had,” says Herman. “Now I have to wait for more to come.”

Uluwatu is open from Wednesday to Sunday at 1239 Avenue Lajoie; the restaurant conducts delivery itself within a 3 km radius, and through Uber Eats