“Whatever is the freshest and the juiciest at the moment — that’s what I want to cook,” chef Maurin Arellano, the owner of Plateau newcomer Vivace, says.

Opened on July 27, the restaurant is a compact 14-seater, where diners can expect a pared-down menu that spotlights small-scale producers who prioritize sustainability and regenerative farming practices. Among them are Patch Farm in the Eastern Townships, which sells grass-fed beef and pastured pork, and organic vegetable farm La Cache Verte, in L’Avenir, with many of these relationships having started with Arrivage, a platform that connects local producers with culinary professionals.

When Arrelano spoke to Eater last week, she’d just received “some beautiful cucumbers and these crazy squashes that supposedly taste like avocado.” She’d also just heard from a farmer that huitlacoche — also known as “corn smut” or “Mexican truffle” — had already started coming in, which Arellano says “is really weird.”

Typically, farmers harvest the corn fungus, with its bluish-grey spores, toward the end of August. “I guess it’s climate change,” Arellano says.

Though considered a delicacy in Mexico for its sweet, woody, even smokey flavour profile, Arrelano says she’s had to convince local farmers to break the habit of shucking them into the compost bin. She’ll be foraging some soon to plate at her restaurant. 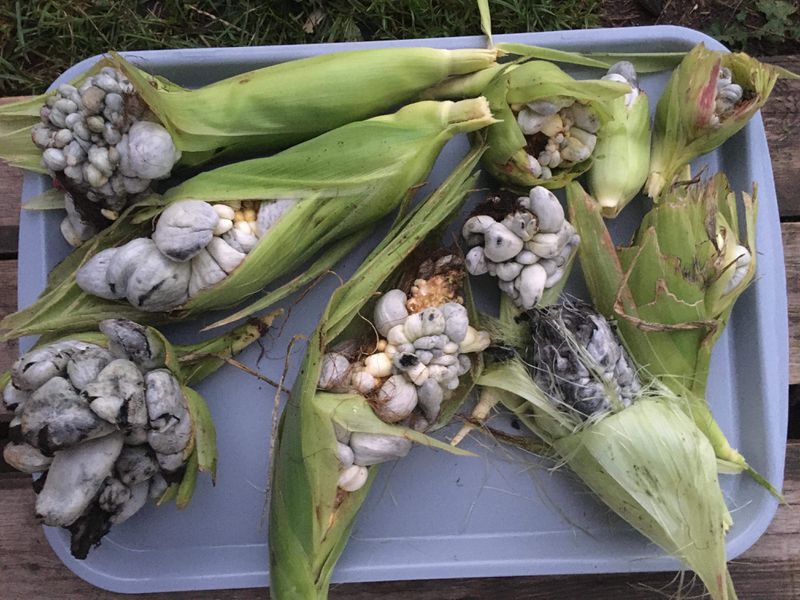 Vivace/SuppliedHuitlacoche, also known as “corn smut” or “Mexican truffle”Vivace’s main offering is “comida corrida” (literally “food in a rush”), a weekly three-course meal ubiquitous at traditional family-owned haunts in Mexico City. These affordable, home-style meals are an enduring tradition that originated at the beginning of the 20th century to feed a new urban working class who’d come from the city’s outskirts.

In some ways, it’s bistro-like, Arellano (who is trained in French cooking) says, noting that regulars will have something different to eat every week. This week brings an appetizer of crostini topped with labneh, Ontario peaches, and furikake, and a lemon cucumber cake with a frosting made of Quebec gin for dessert. There are three options for mains: cacio e pepe pasta with Matane shrimp and pancetta, coffee-rubbed pork served with roasted kohlrabi, or a veggie lasagna layered with homemade ricotta and a spinach-walnut pesto.

While restaurants across town busy themselves with “elevating” produce to the point of unrecognizability, Arellano says she wants diners to experience what ingredients actually taste like. “They’re taking a tomato and turning it into a foam — I’m not going to do that,” she says.

Arellano will be handing out street food from a side window. As with her comida corrida, the offering depends on seasonal availability and what farmers send her way. She hints at barbecued Mexican corn and bowls of tomatoey mussels served with crusty garlic bread. “But I’m Mexican, right? So there will be tacos, too. My clients love my Mexican food, but I’m always trying to tell them it isn’t the only thing I can cook. It’s going to be a mix of things.”

Born and raised in Mexico City, Arellano immigrated to Canada more than 20 years ago, spending the last 10 in Montreal. During that time, she’s become a regular on the music and film festival circuit, cooking at POP Montreal, Santa Teresa, Mutek, Festival du nouveau cinéma, and RIDM. She previously owned and managed Centrale Culinaire, a co-working kitchen on Casgrain, used for production and to host workshops (everything from mole-making to insect-eating), pop-ups, and chef collaborations.

Even before the pandemic hit, Arellano knew she was ready to take the plunge back into restaurant work — a world she’d been in since she was a child, when her family ran a restaurant in Mexico. But she says COVID gave her the push she needed to wind down her catering business. “I was tired of going places. Catering for 500 people is exhausting. You need to bring staff, build a kitchen on-site, bring everyone, and rent cars. It’s insane,” she says.

She’s now looking forward to staying put and having diners come to her — if they can find her engulfed in the rubble that is Avenue des Pins. (The segment between St-Denis and Parc is undergoing mass construction to create a safer, greener, more pedestrian-friendly strip, the city says.)

“When the construction is over, it’ll be nice and accessible, but it does scare me a little. Thank god I already have some people keeping track of me. But it’s a hard place to get to right now. I’m trying to like put a flag up and say, ‘I’m open. Come on over.’”

On the plus side, Arellano is unexpectedly serving hungry workers and even adjusted her opening hours to accommodate them for lunch. “Man, it’s been fun. I mean, my very first customer was a construction guy,” she says, laughing.

Vivace takes over a corner spot at the intersections of des Pins and Colonial, where a Colombian joint called Mr.Empanada once stood. Inside, diners will find an open kitchen, communal dining tables, a graffiti mural (by Omar Bernal) in the bathroom, and art-lined walls. The artworks will frequently change, giving different artists a place to display their work. DJ friends will regularly spin, while burgeoning chefs are welcome to host pop-ups in the space. Arellano hints that more community-oriented initiatives are on the way once Vivace hits its stride.

“I just want it to be known as a chill, homey, community space — but with a badass chef,” she says.