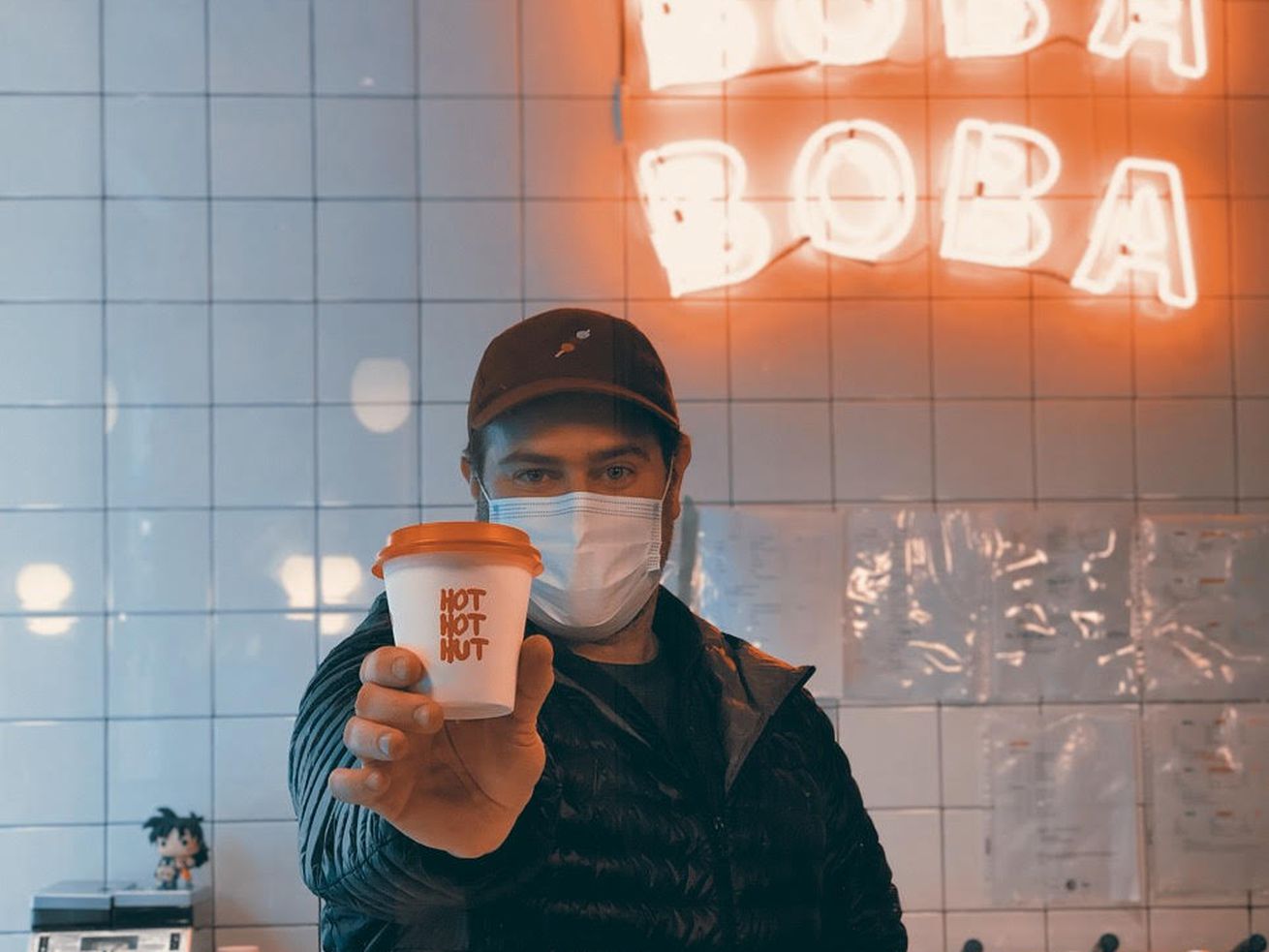 Plus, three more bits of chicken-related news and yet another French taco addition

DOWNTOWN — Prolific restaurateur Yann Levy (Biiru, La Habanera, Escondite, and others) and mixologist Lawrence Picard are launching a Belgian hot chocolate pop-up in the bubble tea outfit they opened this past summer, in hopes of attracting more people to their downtown location this winter. Foot traffic in the commercial area — their business, called boba boba, is located on Sainte-Catherine street near Concordia — has reportedly dropped close to 90 percent since the start of the pandemic, with that figure likely having worsened since December 26, when non-essential businesses across the province were ordered closed.

But as of today, non-essential businesses in Quebec were given the go-ahead to resume operations, and as of tomorrow, Hot Hot Hut will officially begin serving its hot cocoa. “We wanted to find something that could try and bring people here. The hope is that given how cold it is, people might perceive coming to see us as an activity,” Levy tells Eater.

The hot chocolate menu, which will be around for about four months or “until it gets warm,” Levy says, features such creations as a Mexican hot chocolate with honey, cinnamon, orange zest, and guajillo, pasilla, and arbol chili peppers, and the Galak 2.0 with green cardamon, passion fruit, and rosemary. Baked goods courtesy of Plateau favourite Crémy are also in the pipeline.

WESTMOUNT — Chef Émilie Rizzetto, previously of l’Auberge Saint-Gabriel and semi-finalist on the 2012 edition of culinary competition series Les Chefs!is at the helm of Montreal’s latest chicken-focused pop-up. At Westmount BBQ, which takes over the space of now-closed Greek restaurant Estiatorio Kavos, the chicken is roasted and fried, and is joined on the menu by ribs, cajun-spiced cod, and an array of pizzas devised by chef and local media personality Danny St-Pierre. In addition to pepperoni, cheese, and vegetarian pies, there’s a “delicatessen” one piled with smoked meat and a cheesy, oniony one modelled on the French onion soup. The pop-up opened on January 22, for what NightLife says will be a six-month stint.

Westmount BBQ is open for takeout and delivery at 4922 Sherbrooke West.

SAINT-HENRI — Joining Bucky Rooster’s and Les Crazy Chickens on Notre-Dame is yet another chicken purveyor going by the sporty name of Le G.O.A.T. Grill (its logo also shows a chicken mid-air before what looks like a slam dunk and wearing Michael Jordan’s iconic number 23). Unlike the battered varieties at the above-mentioned spots, Le G.O.A.T. Grill opts for a Portuguese-style charcoal-grilled bird. Service starts rolling today.

VILLERAY — Taking up residence just one block over from the founding location of mini chain French Takos, is yet another business specializing in the increasingly prevalent tortilla wrap stuffed with meat, fries, and cheese (and sometimes veggies). TacoTac has opted for a choose-your-own-adventure French taco set-up, where diners are free to create their own version of the mash-up, introduced to the world by Moroccan immigrants to Lyon, France, in the early aughts. Like French Takos, TacoTac seems to have ambitions to multiply — its website features a call for those interested in franchising.

Taco Tac is open for takeout and delivery at 155 Jean-Talon East.

POINTE-SAINT-CHARLES — The folks behind Mollo café announced on Facebook last week that later this year they will be launching a bakery by the same name. “Fresh bread every day, made in the Pointe by people from the Pointe,” the post promises. More news to come.

OUTREMONT — In one last piece of chicken-related news, Roch le Coq has kicked off an in-house pop-up of sorts, which will see local chef friends take over its kitchen to concoct a new dish for its takeout and delivery menu. The series began with chef Simon Mathys of newly opened Le Mastard, whose sandwich featured fried chicken slathered in buffalo sauce, and topped with a creamy, yet chunky blue cheese dressing and pickle slaw. Chefs Paul Toussaint of Kamúy, Ricardo Bertolino of Piazza Sociale, Antonin Mousso of Le Mousso and Le Petit Mousso, among others, have been announced as future guests, and the inimitable Patrice Demers of Patrice Pâtissier is expected to close the series with some sweetness come June, reports Tastet.

Roch Le Coq is open for takeout and delivery at 1541 Avenue Van Horne.