I love oxtail, but man, does it take a long time to cook. A loooong time. I experimented here, and partially cooked it in the Instant Pot before finishing it with the beans, etc, in a pot. I think this tends to produce better results than the Instant Pot alone. I had a lot of dried tomatoes and peppers to use up. If you don’t – and I imagine you probably don’t, whoever you are – then replace them with some crushed tomatoes and maybe a red bell pepper, diced. Or a good big glop of ajvar, if you can get that. This is a very flexible recipe, and you are likely to spend some time adjusting the liquid levels anyway.
4 servings5 hours – 1 hour prep time 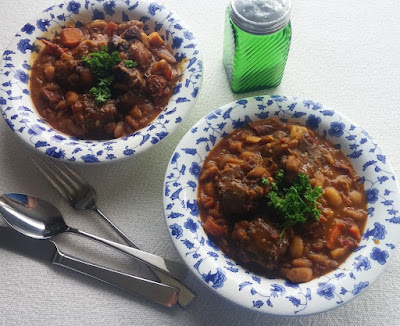 1 kg (2 pounds) oxtail, jointed2 tablespoons mild vegetable oil salt & freshly ground black pepper to taste1/4 cup apple cider vinegar
1 cup dry white beans 3 to 5 cloves of garlic2 medium carrots1 tablespoon mild vegetable oil
1 or 2 bay leaves1/3 cup dried tomatoes1/3 cup dried red peppers4 cups water
Heat the oil in a heavy-bottomed skillet or soup pot, and brown them well on two sides. Season with salt and pepper. If you are using an Instant Pot, put them in it now along with a cup of beef broth or water and the vinegar, seal, and cook for 40 minutes. Allow them to release naturally.
Meanwhile, soak the beans in boiling water. Both of these steps can be done up to a day in advance.
When ready to proceed, peel and finely chop the garlic. Peel and chop the carrots. Heat the oil in a heavy-bottomed soup pot, and sweat the carrots in it for 10 minutes (cook over medium-low heat with the lid on; stir occasionally). Add the garlic and mix in well. Add the oxtail with its cooking liquid, the drained beans, the dried tomatoes and peppers, and the water. Simmer for an hour to an hour and a half over medium-low heat, until the beans are cooked and the oxtails are very tender. Watch the water level and add a little if needed. Stir occasionally to avoid sticking.

If you are cooking it on the stove or in a slow-cooker, the browned oxtail pieces go in in the same way, but they will then need to be simmered for up to 4 hours before they become tender. Don’t add the beans at that time; hold them off until there is an hour to an hour and half left for the oxtails to cook.Last year at this time I made Beet & Cucumber Salad with Horseradish-Caraway Dressing.