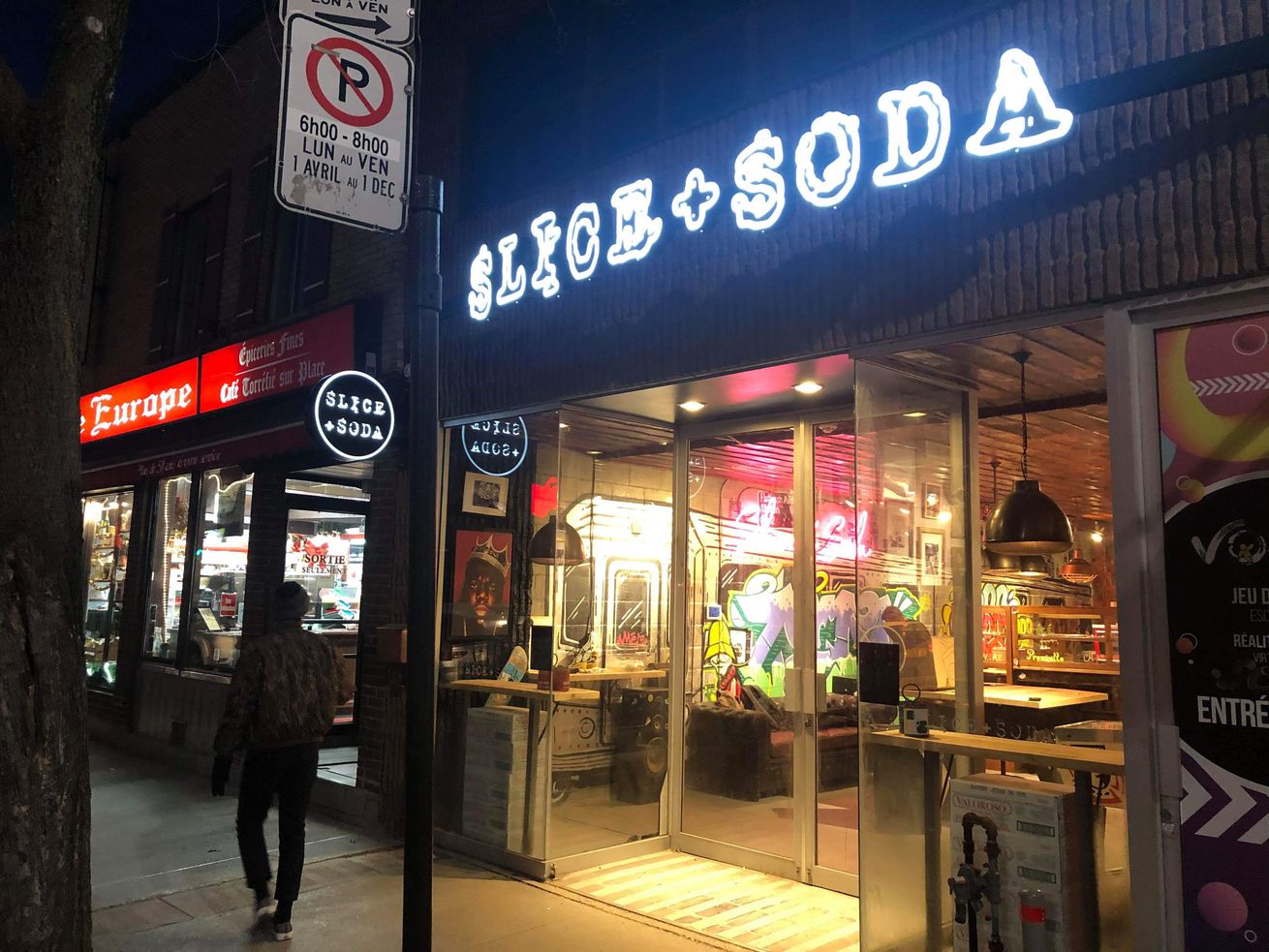 Next up for Slice + Soda: Monkland Village, Griffintown, and even Ottawa

December has been a triumphant month for pizza on the Main. A couple weeks ago, the Mile End stretch saw the arrival of Fugazzi Presto; and today, Slice + Soda, a homegrown Brooklyn-style pizza joint opened its fourth location, between Roy and Napoleon.

Sandwiched between La Vieille Europe and Boucherie Hongroise, Slice + Soda’s new St-Laurent location is slinging the same jumbo ‘zas as its recently-opened Mile End, Old Montreal, and Concordia-area locations, but with what owners hope will translate as a distinctly more “Main” vibe.

There’s a graffiti mural of the New York subway inside done by a local artist and a vintage pinball machine from the 1970s. “We went a bit more artsy on St-Laurent,” Slice + Soda co-owner Brahms Yaich.

France-born Yaich — who’s part of the same group that’s responsible for Montreal’s small Mexican chain Escondite and Griffintown’s Bird Bar — has lived in Montreal since 1978 and distinctly remembers going to bougie supper clubs like Buonanotte, Primadonna, and Mediterraneo on the Main in the late 80s and early 90s. “We used to spend our life there,” he says.

But as those spots shuttered, the Main changed, now boasting what Yaich deems a younger, more budget-friendly vibe. “It’s less ‘shishi’ than it used to be back in the day,” Yaich says.

Slice + Soda’s thin-crust slices are $5 a pop, or $30 for a full pie, and come in your classic New York styles like pepperoni, vegetarian, four cheese, and bocconcini (their take on a margherita). You can fold the pizza like you’re running to catch the New York subway, but if they don’t taste exactly like what you’ll find in Brooklyn that’s because the ingredients have different origins. “The only thing that doesn’t come from Quebec is the flour,” Yaich said. “The flour in Quebec is very tough, so ours comes from Ontario.”

As the name suggests, Slice + Soda also offers its own organic sodas in a bunch of different flavours, including one made of raspberry syrup, blackberry, and kiwi sumac bitters, and another with yuzu syrup, rhubarb, and fuji bitters.

Slice + Soda’s St-Laurent location is just one of many more in the works. Monkland Village and Griffintown are getting franchises soon, along with Brossard, Vaudreuil, Beloeil, and Saint-Sauveur off the island. Even an Ottawa branch is on the horizon for late 2021.

While the pandemic has been extremely painful for many Montreal restaurants, Yaich says he’s fortunate that business hasn’t suffered. “They say timing is essential. Well, this time I believe it,” he says. “We‘re doing very well.”