I have generally shied away from vegetable dishes smothered in cheese and bacon. Of course it would be tasty! But the goal has always been healthy tasty vegetable dishes. Well, the world has changed and now cheese and bacon are health foods*, and it’s sugar that gets the bad rap, as it should. (Mind you, I’ve always tried to avoid too much sugar in veggie dishes too). Then when I was reading “Her Big City Neighbour” by Jackie Lau – one of my favourite romance authors – and the main character went to a bar and ate Brussels sprouts smothered in cheese and bacon, I knew I would have to break down and make them.
Jackie Lau’s books are a lot of fun, by the way. They are set in Toronto and around southern Ontario, so I get to see places I know moderately to very well through someone else’s eyes. The stories have some real depth of emotion without ridiculous over-the-top angst, which is apparently a hard balance to achieve, while still being the light and fluffy escapism that I require so desperately these days in order to keep myself sane and functioning.
Oh, the Brussels sprouts? As anticipated, very yum indeed. There’s a bit of initial prep work, but then they are quickly enough assembled that they could easily be served as bar food.
4 servings45 minutes prep time 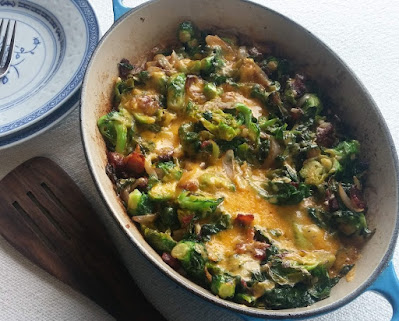 500 grams (1 pound) Brussels sprouts4 shallots4 cloves of garlic4 to 8 slices of bacon1/4 cup light cream or stocka little pepper and/or flaked red chile
1 cup grated Cheddar cheese
Put a kettle of water on to boil. Wash, trim, and slice or roughly chop the Brussels sprouts. Peel and sliver the shallots. Peel and mince the garlic. Cut the bacon into 1/2″ pieces. Put the sprouts in a strainer in the sink, and pour the boiling water all over them. Drain well.
Cook the bacon over medium heat in an oven-proof skillet or stove-top safe casserole, until crisp. Remove it with a slotted spoon and keep it aside until wanted. If there is too much fat in the pan to cook the shallots and Brussels sprouts, pour it off, leaving about 2 tablespoons. Add the shallots and drained Brussels sprouts, and cook, stirring regularly, until done to your liking, a certain amount of browning being quite desirable. While they cook, put the broiler on to heat.
When the sprouts are ready, mix in the garlic and seasoning well. Pour the cream or stock over them, then mix in the bacon. Sprinkle the cheese evenly over them. Put them under the broiler for 2 to 3 minutes, until the cheese is bubbling and lightly browned. Serve at once.