I’m excited about this vegan “meat” mixture, and I’ve been playing around with it quite a lot. It has more texture than some of my past attempts, and it is also pretty simple for this kind of thing. You could leave the shallot and garlic out, and make it even simpler, but they do add to the effect.
I find anything with ground flax or other similar gummy textured ingredients needs to be seasoned quite a bit more strongly than anything made without them – they muffle the flavours, somehow. I’ve also seasoned these to taste a bit like Italian sausage, but you can and absolutely should adjust the seasonings to reflect how you are using these. Poultry seasoning seems like a likely choice, and I am still using this Polish seasoning blend often and enjoying it very much.
The mixture will hold in the fridge for a couple of days before being cooked, which is convenient. It will lose some flavour and texture if it sits too long though, so don’t leave it any longer. I haven’t tried it, but I suspect it would freeze decently well.
4 to 6 servings (16 to 24 balls; 6 patties)25 minutes to cook the buckwheat15 minutes to cook the buck-meat balls 6 minutes to cook them as patties 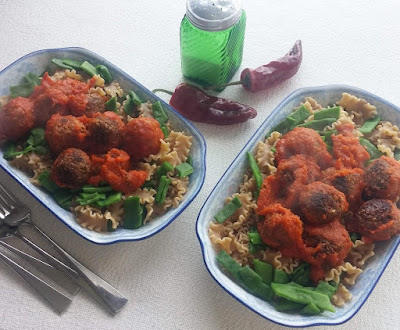 Cook the Buckwheat:1 2/3 cups water1/4 teaspoon salt 2/3 cup buckwheat groats
Put the water and salt into a rice cooker, and turn it on. Toast the buckwheat groats in a dry skillet over medium heat until a good toasty brown, but be careful not to scorch them. When they are toasted and the water in the rice cooker is boiling, tip them in and give them a stir. Close it up and cook for 15 minutes, until the water is evaporated. If they are toasted before the water boils, transfer them at once to a dish to prevent them from over-browning.
Make the Buck-meat Balls:1 shallot 1 large clove of garlic2 teaspoons oil1/2 cup chick pea flour1/4 cup ground flax seed
1/3 cup nutritional yeast
1/3 cup hemp hearts OR finely chopped nuts of choice
1/2 teaspoon fennel seedsfreshly ground black pepper to taste
1 teaspoon oregano1/2 teaspoon red chile flakes (to taste)1 tablespoon miso
2 tablespoons water1/4 cup mild vegetable oil
While the buckwheat cooks in the rice cooker, peel and mince the shallot and garlic. Heat the oil in a skillet over medium heat, and cook the shallot until softened and translucent. Add the garlic for the last minute of cooking. Transfer them to a mixing bowl.

Add the chick pea flour, ground flax seed, and nutritional yeast to the mixing bowl. Grind the fennel seeds with the salt, and add them with the other spices.When the buckwheat is cooked, let it cool enough to handle, then mix it in with the dry ingredients. Mix the miso into the water then into the dry ingredients to form a stiff, crumbly mixture. You can add another teaspoon or so of water if it seems required – it should hold together when you squeeze or press it into a form. Form the mixture into balls – a 2 ounce disher gave me 20; I think next time I’d like to make them just a little smaller. You can also form “hamburger” patties – this will make 6 of those.

Put a good 1/4″ of oil in a skillet sufficiently large to hold them all loosely, then fry them until lightly browned and crispy all over. Start by shaking the pan gently to shift them around; you will then need a utensil to turn those that stubbornly want to remain cooking on one spot only. Use as you would any other meatball. If formed into patties, likewise fry until browned and crisp on both sides.

Last year at this time I made Stir-Fried Glass Noodles with Vegetables.