It isn’t often that I make somebody else’s recipe almost exactly as written, but I couldn’t resist this one when I saw it at Bon Appetit. As I was making it I realized it’s actually my favourite salad formula: fruit, nuts, cheese, and oh yeah, something green to hold it all together. This is a particularly nice iteration. I cut it in half since there were just the two of us, and had a slightly heavy heavy hand with the dates and the lemon juice. We thought this was delicious, even Mr. Ferdzy who does not particularly love dates. Had been hoping to steal a few back from him, but no such luck.
They are a bit dismissive about celery at the Bon Appetit recipe. It’s true that celery has ended up as an inevitable hanger-abouter in people’s vegetable drawers, but it doesn’t get a lot of love or respect, it seems. Too bad. Like cauliflower, it was once a very high-status vegetable in part because it was both seasonal and hard to grow, but modern agriculture has rendered it ubiquitous and familiarity seems to have bred contempt. As this salad shows, it can still really shine.
2 to 3 servings20 minutes prep time 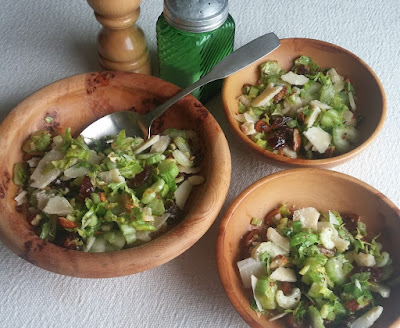 1/4 cup almonds3 to 4 stalks of celery, with leaves4 large medjool datessalt & freshly ground pepper to taste1/8 teaspoon Aleppo pepper (to taste)2 tablespoons lemon juice2 tablespoons walnut OR hazelnut oil30 grams (1 ounce) shaved Parmesan cheese
Chop the almonds coarsely, and toast them in a skillet over medium heat. Turn them out onto a plate to cool when lightly browned and fragrant.
Wash, trim, and slice the celery thinly. Use the leaves. Put them in your salad bowl, then pit the dates, chop them, and add them along with the almonds. Season the salad with salt, pepper, and Aleppo pepper, and toss with the lemon juice and oil.
Shave the Parmesan, and fold it gently into the salad. Serve at once.

Last year at this time I made Kohlrabi Soup.