Way back many years ago I found a little cook book published by MIR, the official publishing arm of the Russian Communist government (yep, that long ago) at the library. I copied out quite a few recipes from it; this was one of them. Unlike a lot of the most famous Russian recipes, this one is not a creation by French chefs then named for Russian aristocrats; it has a fairly well-known origin in the 19th century, at an inn in Torzhok run by a family named Pozharski.
Generally, these are fairly typical of the large family of Russian “cutlets”, the defining features here being ground chicken enriched with butter and fried in a coating of breadcrumbs, then served with a creamy sauce enriched with vegetables.
It occurs to me that these are the direct ancestor of the ubiquitous “chicken nugget”. How the mighty are fallen.
4 servings – 8 to 12 cutlets45 minutes prep time 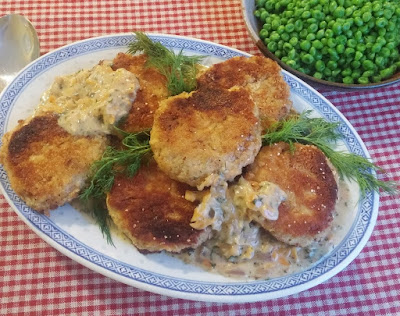 Form the Chicken Cutlets:2 slices of bread (about 2/3 cup of crumbs)2 tablespoons milk or light cream 500 grams lean ground chicken2 tablespoons unsalted butter, softened
1 large egg
1/2 teaspoon saltfreshly ground black pepper to taste2 tablespoons minced fresh dill OR 2 teaspoons dry dillweed1 large egg white1/2 cup fine breadcrumbs3 to 4 tablespoons oil to fry
The bread should be stale but not dessicated; crumble it up in a mixing bowl and pour the milk on it, mixing it to moisten it completely. Once it is, add the ground chicken and butter and mix well. Add the egg, salt, pepper, and dill, and mix again. Separate the second egg, putting the egg white in a shallow bowl and the yolk aside to go into the sauce. Whisk the egg white well. Put the fine breadcrumbs into another shallow bowl. Divide the meat into 8 to 12 equal portions and roll them into neat balls. Roll each one in the egg white, then in the bread crumbs. Flatten them into patties and set them on a plate as they are done. Set them aside (in the fridge, if necessary) until the sauce is on the way to being made. They will fry up quite quickly.
Make the Sauce & Cook the Patties:1 medium turnip1 medium carrot1 medium onion1 or 2 cloves of garlic 2 tablespoons minced parsley1 tablespoon barley or wheat flour1/4 teaspoon saltfreshly ground black pepper to taste1 tablespoon unsalted butter1 cup unsalted chicken stock1/2 cup 10% cream1 large egg yolk1 to 2 tablespoons sherry or madeira
Peel and finely dice or coarsely grate the turnip and the carrot. Peel and finely chop the onion. Peel and mince the garlic. Mince the parsley and set it aside in a small bowl with the garlic, the flour, and all the remaining seasonings.
Heat the butter in a shallow saucepan or medium sized skillet. Once it is melted and foaming, add the turnip, carrot, and onion. Cook gently over medium heat, stirring regularly, for about 10 minutes until the vegetables are softened and reduced in volume but not much browned.
At this point, you should heat a couple tablespoons of oil in another large skillet over medium-high heat in which to cook the chicken cutlets. They will take 3 or 4 minutes per side, and you will likely need to do them in 2 batches, and add a bit more oil to the pan when you start the second batch. Keep them warm in the oven at 200°F until they are all done.While the cutlets cook, finish the sauce. Add the little bowl of seasonings and mix in well. Once there is no visible flour remaining, mix the chicken stock in slowly, stirring constantly. Whisk the egg yolk and sherry into the cream. When the chicken cutlets are all cooked, whisk the cream into the sauce and let it cook for another minute or so until the sauce is thickened. Serve the cutlets with the sauce at once.

Last year at this time I made Spinach-Spelt Spaetzle or Gnocchi.