I’ve been declaring for years now, that when Donald Trump was removed from the US presidency, I would celebrate with chocolate cake. Since I can’t go around chocolate caking in the way I would like, I killed 2 birds with one stone and made this back at the end of November for Mr. Ferdzy’s birthday as well. The only new thing here is the roasted strawberry cream. I used frozen berries, and they worked out reasonably well. Most recipes for roasted strawberries call for somewhere between a little and a lot of sugar as well, and if I did it again I might sprinkle 2 tablespoons over them before roasting and then only put 2 tablespoons in the cream. But really, it was fine. Mr. Ferdzy’s birthday request was for a “real” cake, ie not one of the things I’ve been making for my diabetic diet. I mostly complied. The chocolate pudding frosting was unchanged, other than the fact that half a recipe was exactly right for this amount of cake. I did cut the sugar in half in the cake itself, and from the point of view of flavour, that was fine. I think it not being there did make the texture a bit stodgy. But we preferred to think of it as dense and moist, and it was a long-awaited pleasure to eat it. In every sense. Here’s to sanity! The events of the last few weeks make it clear that we are hanging on to it by our fingernails, but it seems to be prevailing. We should not be complacent here – the Canadian Conservative party is badly infested with the same kind of people who have been supporting Trump and it behooves us to be aware of that.
But in the mean time, we are in a hopeful moment. Let’s raise a fork to that!
6 to 8 servings1 hour – to make cake & roast strawberries20 minutes – to make frosting 20 minutes – to finish cream and assemble cake 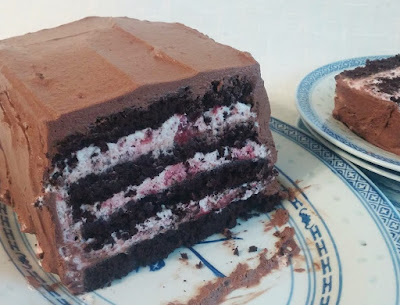 Roast the Strawberries:4 cups strawberries, fresh OR thawed from frozen
If fresh (greenhouse, at this time of year), wash and hull the strawberries, and cut them in half if large. Preheat the oven to 350°F. Line a large baking sheet with parchment paper and spread them over it in a single layer. If thawed, drain off and discard the liquid. Spread them out on the lined baking sheet in the same way. Roast for 40 to 50 minutes, until greatly reduced in volume, with a thick, jammy texture. Transfer them to a bowl to cool.
Make the Cake & Frosting:
1 recipe Cocoa Cream Roll cake only1/2 recipe Chocolate Pudding FrostingMake the cocoa cream roll in a 9″ x 13″ pan as directed. It can be baked at the same time the strawberries are in the oven. Do not roll it; when it is cool, it should be cut into 4 equal quarters. Make half the chocolate pudding frosting as directed. Keep it cool until needed.

Finish the Roasted Strawberry Cream & Assemble Cake:
1 cup whipping cream1/2 teaspoon powdered gelatine1/4 cup sugarPut the cream into a mixing bowl and sprinkle first the gelatine and then the sugar over it. Let it rest for about 10 minutes, then beat until stiff. Beat or fold in the cooled roasted strawberries. Place one quarter of the cake centred on a serving plate, and spread 1/3 of the strawberry cream evenly over it. Top with the next quarter of cake and 1/3 of the cream. Finally, put on the next quarter of the cake, spread on the remaining cream, and top with the last piece of cake. Spread the chocolate frosting evenly over the top and sides of the cake. Keep the cake cool until you are ready to serve it – it will slice better if slightly chilled.

Last year at this time I made Potato Buckwheat Gnocchi.