What is there to say? It’s curried and roasted parsnips and sweet potatoes; a little sweet, a little spicy. Root vegetables are amazing for carrying on all winter and into the spring.
4 servings1 hour 15 minutes – 30 minutes prep time 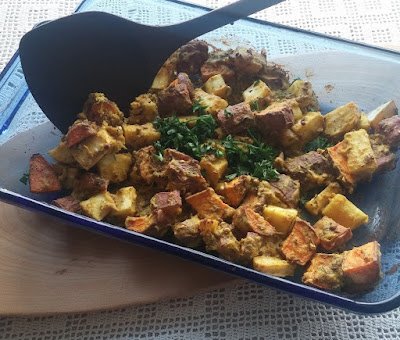 Peel the parsnips, and cut them into large bite-sized pieces. Wash, trim, and cut the sweet potatoes into similar chunks. Toss them with the oil in a shallow baking pan, in which they can be spread snugly but in a single layer. Season with salt and pepper. Roast for 30 minutes. Stir them and roast for a further 15 minutes. This 15 minutes is the time to prepare the spices.

Prepare the Spices & Finish:1 teaspoon cumin seeds2 teaspoons coriander seeds1 teaspoon fennel seeds1 tablespoon finely grated fresh ginger2 or 3 cloves of garlic2 tablespoons chick pea flour1/8 teaspoon fenugreek seeds1/4 teaspoon black peppercorns1/4 teaspoon allspice berries1/2 teaspoon salt1/2 teaspoon ground turmeric1/4 teaspoon ground cinnamona good grate of nutmeg 2 tablespoons mild vegetable oil1/2 cup thick yogurt
Measure the cumin, coriander, and fennel, and set them aside in a small bowl.
Peel and grate the ginger and garlic, and put them in smallish mixing bowl. Add the chick pea flour. Grind the fenugreek, peppercorns, and allspice with the salt, and add them. Add the turmeric and cinnamon. Grate in some nutmeg.
Heat the oil in not-too-large skillet over medium heat. Add the bowl of whole spices, and cook, stirring, for a minute or two until they toast slightly and become fragrant. Add the other bowl and seasonings and mix in well. Cook for another minute or so, until it is a bit dry and pasty. Turn it back into the mixing bowl and mix in the yogurt.
When the vegetables have roasted for the 15 minutes, take them out and stir the spiced yogurt into them until they are all evenly coated in it. Return them to the oven and bake for a final 15 minutes. Serve at once.

Last year at this time I made Baked Penne or Ziti.