This “traditional” Danish dish only dates back to the 1960s (as someone born at the beginning of that decade I refuse to consider that to be very long) but it has since become well-established. The simplest versions simply wrap the leeks in prepared sausage and bacon, but most call for home-seasoned ground pork and bread them in crumbs. I’ve put a little bacon on as a garnish, but it is not really required. (Although how can it even be Danish, if there isn’t any bacon?) A thing I found amusing while researching this dish was the translation of the name. It gave Google Translate a fair bit of indigestion, because “farserede” means stuffed, but it has a literal meaning of “feathered”. It took me a while to make the connection. Moreover, these are not leeks that are being stuffed with something, but leeks that are being stuffed into something, which is both linguistically and culinarily a bit peculiar. Results, however, are not peculiar but very tasty. This is a simple recipe that does not require many ingredients, but still manages to look quite sophisticated – always nice.
Note what I say about cooking those leeks, and I find that even well-cooked whole leeks require steak knives.
4 servings15 minutes initial preparation45 minutes – 15 minutes prep time 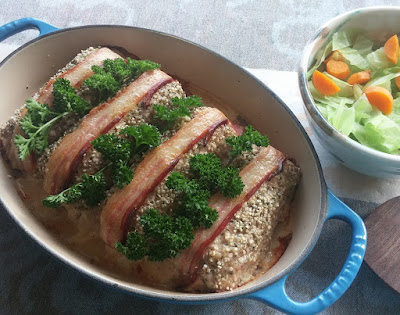 Prepare the Leeks & Stuffing:2 large or 4 small leeks 500 grams (1 pound) lean ground pork (could use turkey)
1 teaspoon saltfreshly ground black pepper to taste1 teaspoon poultry seasoninga good scrape or 2 of nutmeg2 tablespoons barley or other flour1/3 cup milkPut a pot of salted water on to boil, in which you will cook the prepared leeks.
Trim and wash the leeks, and cut them into 4 logs of about 4″ long, discarding the dark green top leaves, roots, and removing any outer leaves that seem tough or damaged. Boil them for 6 to 10 minutes, until tender when pierced with a fork. They will not get cooked much more than this, so they should be done to your liking.
Meanwhile, put the pork into a mixing bowl with the remaining ingredients and mix, by hand, very well. The mixture should be quite smooth. Cover and keep refrigerated until needed.
Drain the leeks thoroughly when done, let cool, cover, and keep refrigerated until needed. Both of these tasks can be done up to 24 hours in advance.
Stuff & Bake the Leeks:1/2 cup bread crumbs (I used hemp meal)4 slices baconparsley to garnish
Preheat the oven to 400°F. Very lightly oil a shallow baking pan which will hold the stuffed leeks (1.5 to 2 quarts).

Put a piece of parchment paper large enough to roll the leeks in on a clean, dry countertop. Sprinkle about a tablespoon of crumbs into a square about an inch wider than the leek pieces, and about 4″ or 5″ long. Take 1/4 of the sausage mixture and pat it into a rectangle about 2″ longer than the leek pieces, and wide enough to encircle them; over the crumbs in other words. Place one leek piece on the sausage, and use the parchment paper to roll it up in a neat cylinder. Seal the ends; the leek should now be entirely encased in crumb-covered sausage. Roll it in a few more crumbs if there are bald spots. Place it in the oiled pan, and repeat with the remaining sausage and leeks. Place one strip of bacon lengthwise over each leek. Bake the stuffed leeks for 30 minutes, until lightly browned and sizzling. Let rest 5 minutes before serving, garnished with parsley.

Last year at this time I made Leek & Oyster Mushroom Lasagne.