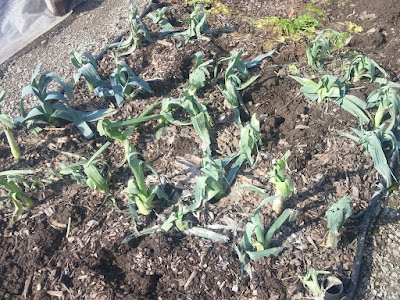 This photo dates back to the middle of March, when we had 2 very warm days that melted what had been a good foot of snow over the garden before reverting to more seasonal temperatures. Immediately, the leeks looked amazingly good, which is what we are looking for with this particular strain of leeks. Of course, the past winter was a good one for plants coming through it in good condition, being consistently cold but not intensely cold, and with persistent snow-cover. April has been up and down (mostly up, but with a down that killed the apricot blossoms, as usual). At any rate, we’ve been digging out the ones we think a little too small to let them go to seed, and they have been entirely respectable in size. Very, very happy with the leeks this year. 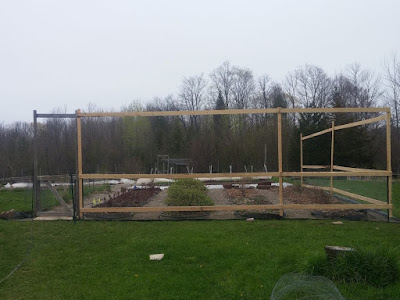 It turned out that the rabbit fence Mr. Ferdzy put up 2 years ago had some problems. The main one was that weeds could not be trimmed around the base with a weed-whacker; it actually destroyed the chicken wire. Also, it did not keep out deer which continued to be a problem. So this year, he is re-building it. It will now sit in a base of gravel, and be 2 rows of chicken wire high. This will make for a stressful spring; I help him with the building a little bit but most of it is his work. However, that will leave pretty much all the planting and weeding to me.
We made a good start on getting this project going, but recently the weather has been slowing us down; either too cold or too wet. Hopefully that will change soon. 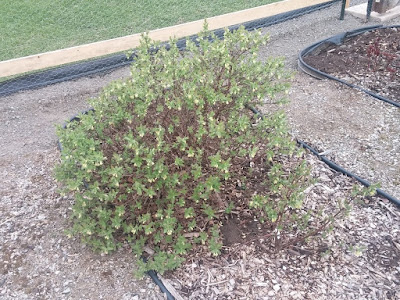 Haskap shrubs are already in bloom! Strawberries are only just starting to think about it, so it looks like the haskaps will be even earlier than the strawberries this year. Garlic is another one that doesn’t mind the mostly fairly chilly (after the early warm spell) spring that we’ve been having. We’re down to growing 4 varieties, from left to right: Tibetan, a local foundling, Bogatyr, and Azores (Portuguese). Tibetan looks thin and weedy compared to the others, and it is a smaller garlic. We continue to grow it because it is the last to sprout – last to come up in the garden which at first we interpreted as a bad thing, but then we realized it’s also the last to sprout in storage, so we save it for use in the spring and early summer when the other varieties have all sprouted. 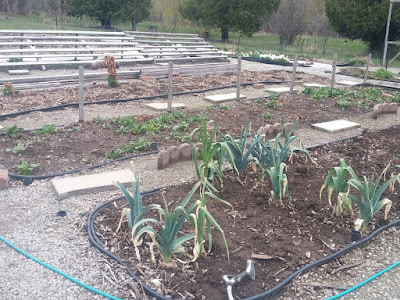 Here is how the leeks looks now. We harvested all the “losers” and they were of really very good quality for the most part; substantial and tender. I only had to peel off one or two outer layers which is not that much worse than what must be done with fall harvested leeks. The best have been left in the bed, which will contain tomatoes. We’ve been leaving more and more overwintered veggies in place to go to seed wherever possible, and plant the new crop around them. It’s mostly been working quite well. 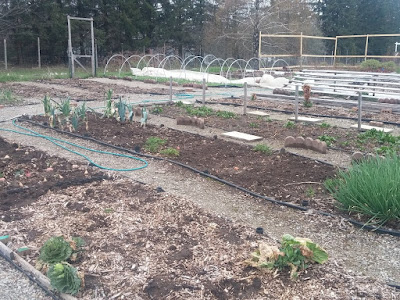 We’ve left a few Turkish celeriac in the tomato bed to go to seed in addition to the leeks, and I’ve replanted carrots for seed as well. The closer bed contains a few cabbages for seed and replanted onions for seed. This too will be a tomato bed this year. Beyond the third bed, which contains some overwintered spinach (much damaged by mice, but recovering) there are some stubs of Brussels sprouts. I am not sure enough of them will resprout and go to seed, but if they do we will pull the cabbages so they don’t cross. We have lots of cabbage seed; the Brussels sprouts are a higher priority. 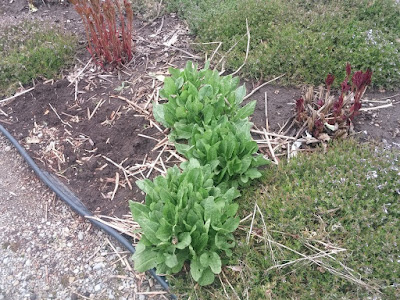 Sorrel has been early and prolific this year. I’m in the process of moving it out of this bed, which is really for peonies, but it’s going into a bed with a long side against the new fence and until that fence is built it’s a bad idea to move them there. Which means it may be the fall or next spring before that happens. In the mean time, lots of sorrel dishes are happening. 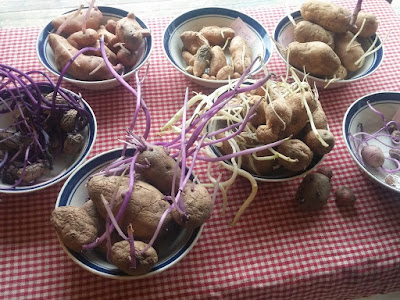 I didn’t take a picture of all the pots of tomatoes, peppers, etc that we are hauling in and out as we usually do. They look like they usually do too. However, here are some of our potatoes, almost all (but the 3 on the tablecloth) grown from seeds. These are the survivors out of dozens, if not hundreds, of potato seeds planted over the last few years. I am particularly happy with the ones in the top left bowl. They have lovely pink skin, excellent flavour, decent productivity, and it looks like they keep better than most too. In general, I’m not impressed by how much these have sprouted, but I also realized they sprout worse than our eating potatoes because the spot where we’ve been storing them is next to an outside wall and temperatures fluctuate more than in the spot where we’ve been keeping the eating potatoes. Next winter I’m going to find a different spot and see if they don’t do better.
Once the fence is up along their bed – and it’s the one being worked on now – these can be planted. Dandelions are in bloom, even if we are supposed to get sleet in the next couple of days. I really hope that’s the last of it and we are on to another season in the garden.