We had a very small crop of late-planted turnips this fall. We planted quite a lot of seed at the beginning of August, and it all came up very nicely, and I was excited. After about a week or so, though, I noticed the greenery was not advancing, but retreating. It soon became clear that they were being eaten by bugs faster than they could grow. Only a handful survived and thrived enough to produce a usable root. We are going to have to find some way to deal with this next year; it seems the longer we garden the worse the bug situation gets. I was also surprised to see that about half of the survivors, or even a bit more, were white turnips even though we had saved seeds from Goldana. Recessive genes? Cross contamination in the previous generation? No idea. I saw the trick for cutting the turnips on Pinterest somewhere, but I can I find it now? I cannot. But cutting your turnips while they are held in the cup of a wooden spoons keeps them in a nice shape as they cook. I’ll be doing it again.
4 servings1 hour 10 minutes – 10 minutes prep time 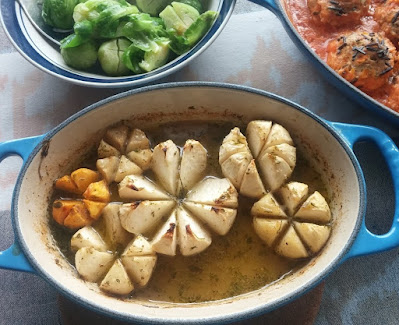 Last year at this time I made Perfect Fluffy Scrambled Eggs.