For Fabienne Côté, smoked sturgeon is like the bacon of the sea. Or, more accurately, the cured pork of the large lakes and rivers in Ontario and Quebec. “Everywhere you use bacon, you can use smoked sturgeon,” says Côté, who fishes and cures the native species in St. Eugene, a tiny town on the Quebec-Ontario border, directly east of Ottawa.

When not serving the “meaty, chicken-like” fish in a carbonara or on a cracker with a beer (her favourite way to eat it, by the way), Côté is the driving force behind Petit Brûlé, a boutique smoked fish business she runs alongside her husband, Michel La Haye.

“We named it Petit Brûlé for two things,” she explains, a Francophone lilt to her words. “It’s a term used in sugar-shacking, where they would light a small fire at the end of the day for the last of the maple syrup. When we’re smoking the fish, we also make a ‘petit brûlé.’” And while their address in Ontario is on Concession 7, that same road is called “Petit Brûlé” when it crossed into Quebec, something Côté says “just worked out.”

The hand of fate also seems to have a hand in how this business came about: Both wildlife biologists by training, Côté’s husband inherited a license from an octogenarian fisherman he met while studying fish populations on the St. Lawrence. Côté, who handles the preparation of the fish for sale, learned everything she knew from Gaston and other commercial sturgeon fishers. “Now, I think I’m pretty good,” she says modestly. Her secret? “Smoke with maple wood,” she says. “It gives a sweetness to the fish.”

Because sturgeon—”a dinosaur fish, which looks like a cross between a shark and catfish” according to Côté—are actually an endangered species in Canada, which is why Petit Brûlé is so dedicated to sustainable fishing. (Their license is only for around 340 fish a year, which translates to about 3,000 pounds of smoked sturgeon.)

For a few weeks in June and July, and then again in September and October, they head out onto the Quebec side of St. Lawrence River on their flat-bottom, 21-foot boat, checking the nets they have left overnight for fish. “On a good day, we catch 60 sturgeon, although we usually throw around 30 back in the water because they’re too big or too small,” says Côté. Once caught, the fish are immediately processed, vacuum sealed and frozen. The couple smoke them on demand throughout the rest of the year for a growing roster of restaurants and stores in Ontario

“I know our fish are ugly,” she says with a laugh, “but they’re tasty.” 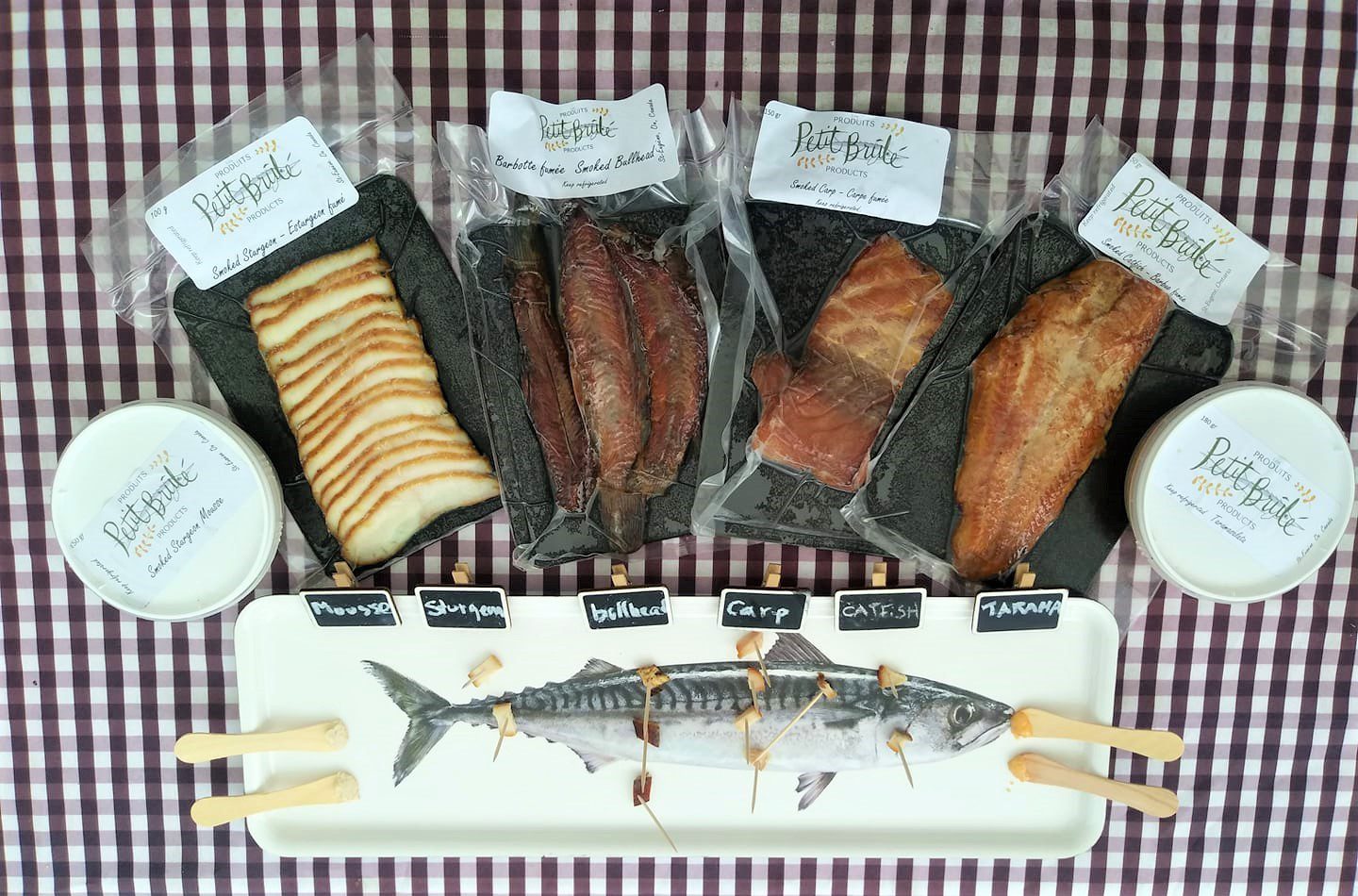 At Avling, an urban farmhouse brewery in Leslieville, the focus is on “making that connection between farmers and the cities they feed,” says owner Max Meighen. “We’re always looking for ways to support and grow a circular, regenerative economy.” That means stocking sustainable products—like Petit Brûlé smoked sturgeon—and looking for creative ways to reduce waste.

To that end, the former chef is working on several exciting projects right now. “I’ve just been to the lab we’re working with to try to develop a treatment system that will allow us to use the wastewater from the brewery as irrigation for our rooftop farm,” Meighen explains, before happily nerding out on a pilot project they’re embarking on with their pork producer, who rotates grazing fields to give the land time to rest. In fallow years, he grows grain that often goes to waste. Avling is looking to purchase it for the brewery.

But the ingredients and products on its menu are perhaps the most obvious way restaurant-goers can experience Avling’s commitment to sustainability. And that’s where Petit Brûlé smoked sturgeon comes in. “As a Feast On certified restaurant, we’re committed to sourcing the majority of our products from Ontario,” Meighen explains. “Sturgeon is not a common item to find, so the idea of local, smoked sturgeon was exciting.”

At Avling, you’ll usually find it served up on one of their charcuterie boards, accompanied by their house-made pickles, pates and on-site-butchered meats like guanciale or coppa. “We like to serve it unadulterated,” says Meighen, “because smoked sturgeon really has all the flavour it needs, and Petit Brûlé does an excellent job of not over-smoking it.”

The move, he says, is this: “Put it on one of our crackers, made from spent brewery grain, and then add a little bit of pickle, to cut through the fattiness with a little acidity.” Most importantly, “don’t mess around with it too much.”

The vendor: The Burrow Shop

Like many developments in 2020, The Burrow Shop came about as the result of the pandemic, well, turning our world upside down. “Buchipop, our kombucha brewery, had a quick and major loss of sales very suddenly in mid-March,” Patricia Larkin says of the days of total lockdown, which shuttered the stores and restaurants where the fermented drink her company makes was sold. Thinking other Ottawa-based entrepreneurs in the food space were likely dealing with the same economic cliff, the Buchipop team built The Burrow Shop in a matter of days, launching the online “farmer’s market” on March 27.

Their offering has quickly grown to 600 products from 60 local vendors, one of which is smoked sturgeon from Petit Brûlé. “When you’re thinking local, there aren’t a lot of fish options,” says Larkin, who felt like it was a big gap in their offering. As with many of the things they stock, they heard about Fabienne and her smoked fish via word-of-mouth, from two of their other vendors, Mariposa Farm and Pascale’s Ice Cream. “Not only is the fish caught nearby, but it’s fished by the same person who cleans it, smokes it, packages it and, often, is even making the delivery.” Petit Brûlé, in short, fit The Burrow Shop’s ethos of shortening supply chains “perfectly.”

It also became a staple of the staff’s diet. “In the early days, it was crazy hectic, and we were spending a lot of time here,” remembers Larkin. “We would make our meals out of groceries in the shop, and smoked sturgeon was one of our go-to lunches.” They’d serve it on top of a Kettleman’s bagel smeared with cream cheese alongside pickled onions, a pile of Northern Crunch lettuce from another vendor, Fieldless Farms. “Delicious!” raves Larkin. “The smoked sturgeon is so wonderful; it doesn’t take much effort to whip up a great plate with it.”