North Americans tend to scream in horror at the mere sight of savoury things moulded in gelatine. Try not to wake your neighbours, okay? Hungarians on the other hand, still seem to make quite a lot of these dishes. Possibly because they have always used plain gelatine and avoided sugary artificially flavoured mixtures (*cough* Jell-o *cough*) and avoided combining bizarre ingredients in the name of novelty. Everything here classically goes together nicely; no novelty involved, and nothing is the worse for that. This is a lovely lunch for a stupidly hot day; cool and refreshing, and substantial without being heavy. A bit of bread and salad is all it needs to be a meal, or this is the sort of thing that looks attractive and is very practical for buffet entertaining.
16 slices40 minutes prep time PLUS at least 3 hours to set 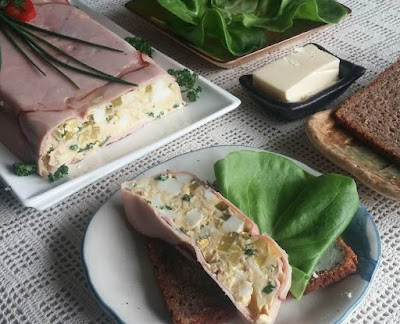 Put the eggs into a pot with water to cover, and bring them to a boil. Boil for 1 minute, then cover them and turn off the heat. Let them sit in the hot water for 10 minutes. Put them in cold water to cool. Peel them, and cut them in half. Put the yolks in one mixing bowl, and mash them. Dice the whites and put them in another bowl with the diced dill pickle, parsley, and chives.
Put the broth into a pot and sprinkle it with the gelatine. Once it has soaked for a few minutes, heat the stock until it is steaming and the gelatine dissolves completely when stirred, but don’t let it boil. Let this cool as you continue.
Mix the mayonnaise and mustard into the mashed egg yolks, then mix in the yogurt or sour cream. Season with salt and pepper. A good hit of pepper is desirable, but keep in mind that the ham, broth, mustard, and mayonnaise all contain salt – a brief pass over the bowl with the salt shaker is likely to be sufficient.
Pour about 2 tablespoons of the broth into a large loaf pan, and make sure it runs all over the bottom and sides. Lay a slice of ham centred in the bottom of the pan, then place a slice at each end, overlapping the first slice but hanging over the side of the pan – this will be folded over the filling to encase it. Add two more slices in the same way to each long side of the pan. Set one slice of ham aside for the top.

Mix the remaining stock into the egg yolk mixture. Add the egg whites, etc, and mix them in. There should be 2 remaining slices of ham; chop them finely and mix them in as well. Pour this mixture into the ham-lined pan and spread it out fairly evenly. Fold the ham slices up to cover it, then top with the last slice of ham.
My ham came with a piece of waxed paper; I pressed this onto the surface of the loaf and made sure it was completely flat and covered. Seal or cover the pan and set it in the fridge to set overnight or for at least 3 hours. To serve, set the pan into a large pan of warm (tap) water for a few seconds. Run a butter knife around the edges to loosen it, then place a serving plate over it and flip it over to unmould. Garnish with a little parsley and some chives, if you like. Serve in slices.

Last year at this time I made Polpette di Zucchine.