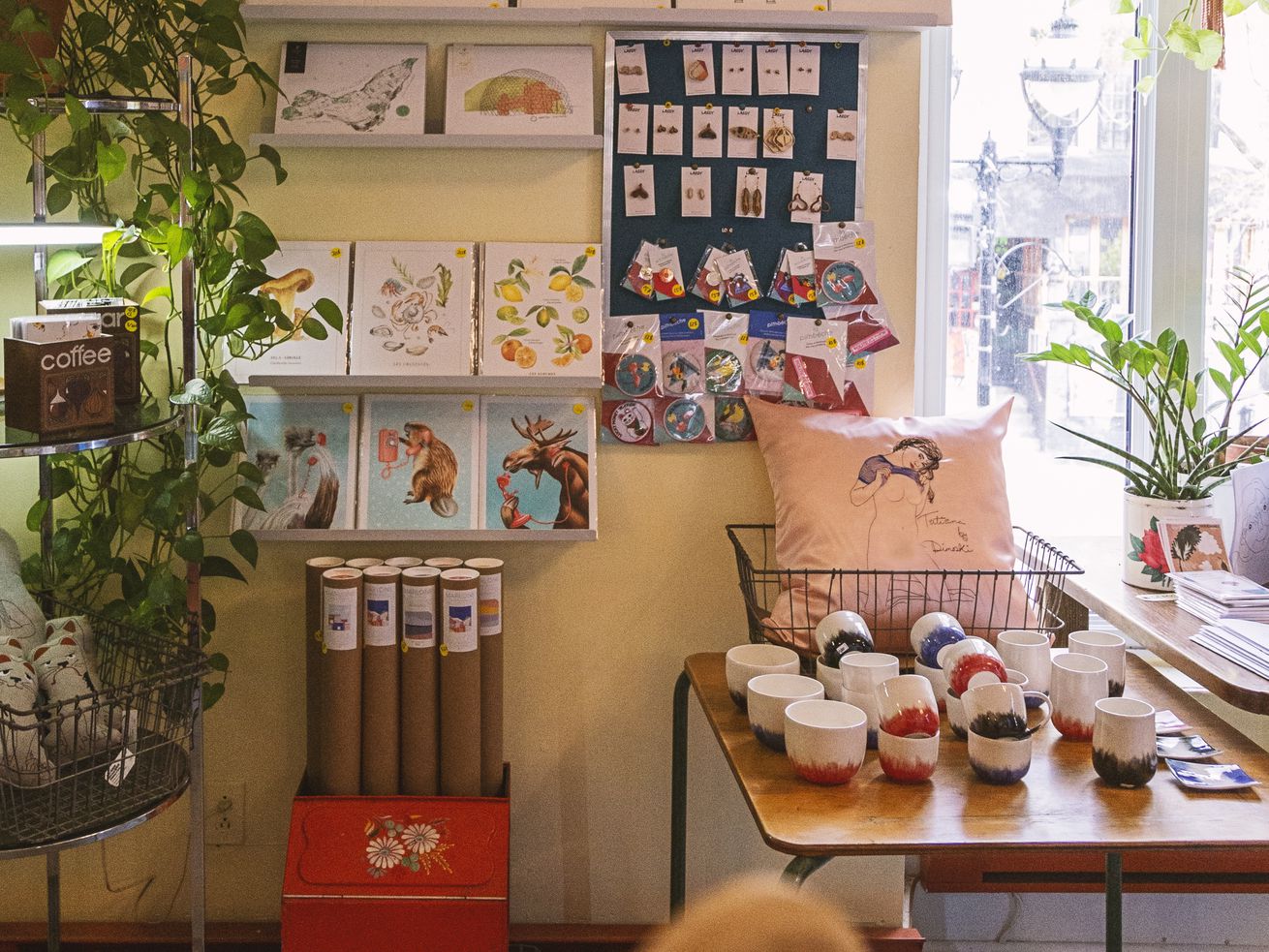 “When we heard that everything was going to be shut, we went into problem-solving mode”

When Dave Plant, the chef-owner of Latin Quarter café Bonjour-Hi, learned that dining rooms would be forced to close until October 28, he suspected it would end up being longer than that. Mid-way through November, he and the rest of Montreal’s restaurant community are still holding their breath to see whether normal operations will actually be allowed to resume on November 23. But even if they are, Plant says the pop-up shop selling the creations of local artists that he erected in the cafe space will remain in place until at least January.

The pop up operates on consignment, with two-thirds of profits going directly to the thirty or so artists who’ve agreed to stock its shelves. (For contrast, most stores offer a 50/50 split, Plant says.) Among the goods for sale are the posters of Emma Kudlac, vintage objects from Partie Remise, the hand-thrown ceramics of Mathilda Lovell, and the colorful, graphic jewelry of Aisha Diallo and Anna Binta Diallo’s brand samarakk.

“When we heard that everything was going to be shut, we went into problem-solving mode. We have all this space, and with Christmas coming up and everything, we figured we might as well take advantage of it,” Plant says.

While indoor dining is forbidden under red zone regulations, indoor shopping isn’t. It’s a topic that grates at Quebec restaurant owners who believe the sanitary measures they’ve introduced make them just as safe as, if not safer than, many retail outlets. “The fact that you can go to IKEA, but you can’t go to a local restaurant that has strict standards and has spent thousands of dollars in protection measures is just a joke,” Plant says.

Nonetheless, he’s decided to make the best of the situation by reconfiguring his space into a boutique, using tabletops once designated for lunchtime dining and study sessions, to perch the creations of Montreal artists. (Prior to the pandemic, Bonjour-Hi already had a small corner of artisanal goods for sale at the front of the cafe, making this recent development more of an expansion than a total overhaul.)

“Local artists are suffering as well, so we figured why not kill two birds with one stone. Regardless if Legault says we can open tomorrow, it doesn’t matter. We’re gonna keep this going until Christmas,” Plant says.

After supplying baked goods to other cafes, like Dispatch and Larue & Fils, for years, Plant opened Bonjour-Hi on St-Denis in November 2019, garnering some serious media attention when the announcement of its bilingual name coincided with news of the Quebec government’s contemplated — and eventually dropped — ban of the phrase “Bonjour Hi” as a greeting in Montreal’s service sector. Plant had actually landed on the the name before the phrase became a matter of debate in Quebec political discourse, and told Global News at the time that the controversy had actually helped put his new cafe on the map.

But things have since quieted down for the St-Denis Street cafe. “St-Denis is one of the worst hit with the drop in tourism. There is nothing. And we’ve got three schools in our area — UQAM, Cégép du Vieux Montreal and Institut National de l’Image et du Son — that have all closed. There isn’t much residential living in the area either. So I’d say along with Downtown and Old Montreal, we’re probably doing the worst.”

St-Denis Street has seen had some notable closures since the the start of the pandemic including Québécois eatery, Chasse-Galerie, and iconic diner-style pizzeria La Pizzaiole. Meanwhile, some merchants on the street have been critical of mayor Valérie Plante’s all-seasons express bike path on St-Denis, which they say will negatively impact businesses at a time when they are already in floundering.

For the record: Though café Bonjour-Hi is located below Sherbrooke on St-Denis, past the most southern point of the cycling corridor, Plant isn’t opposed to it: “To me, the more bike paths the better. I actually think more people traveling at a slower pace is going to be better for businesses. People can stop and shop more easily.”