Like most stews, there’s nothing complicated about this; it just needs a little advance planning. Get the split peas and lamb cooked the day before; put everything together and simmer the next day for perfect winter comfort food. Getting towards the end of the season for that, I hope, though. It looks like after a slow start spring is finally gathering some steam.
The recipes I looked at used lamb shank and coarsely chopped cabbage so I followed suit. However, I think that this would be just as good and certainly less expensive to make with lamb stewing meat, with or without bones although bones are better if you can find it. If you are buying your lamb from a butcher you maybe able to score some soup bones. Even a little beef bone would be better than none. In fact, if lamb is not an option I would make this with beef and still expect it to be really very good.
My lamb shanks were the biggest I’ve ever seen, so I used two for the three of us, cutting off the meat and removing the bone before serving. There was enough left over for Mr. Ferdzy and I to have it for lunch the next day. So smaller pieces of lamb are better, in my opinion, and also I would chop the cabbage more finely. With those minor changes, this is one of the best stews I’ve had in quite a long time. This is traditionally made with dried limes, but good luck with that. I just put in a little squeeze of fresh lime juice at the end.

You can serve it with rice, or bread on the side. It’s definitely soupy/stewy, so in any case be sure to supply spoons.
4 to 6 servings2 hours 45 minutes – 45 minutes prep time 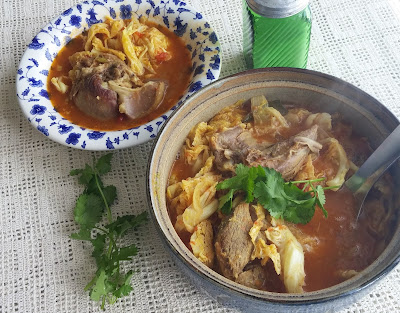 Advance Cooking:1/2 cup split yellow peas2 cups water1/4 teaspoon salt 1 tablespoon olive OR mild vegetable oil
2 kilograms (4 to 6; 2 pounds) small lamb shanksOR 1 kilo bone-in stewing lambwater1 teaspoon salt
Put the split peas, water and 1/4 teaspoon salt into a rice cooker and let them cook. Alternatively, put them in a pot and simmer gently until the peas are softened. Stir regularly. Meanwhile, heat the oil in a large skillet and brown the lamb evenly. Put it into a heavy-bottomed sstew-pot with 2 cups water and 1 teaspoon salt. Cover, and simmer gently for about 1 hour, until cooked through.
OR put it in an Instant Pot with 1 cup water and 1 teaspoon salt. Cook for 30 minutes then allow it to release naturally.Both of these can be done up to a day ahead.

Peel the onions and chop them fairly coarsely. Wash, trim, and chop the cabbage. Add the spices and cooked peas to the meat, in a large heavy-bottomed pot. Add the tomatoes. Bring to a simmer and simmer gently for half an hour, stirring regularly. Add the onion and simmer for 15 minutes, then add the cabbage and lime juice and simmer for 10 to 15 minutes, stirring regularly, until the cabbage is done.
If you can serve it garnished with a little chopped cilantro, so much the better.

Last year at this time I made Onion, Mustard, & Red Pepper Bulgur.