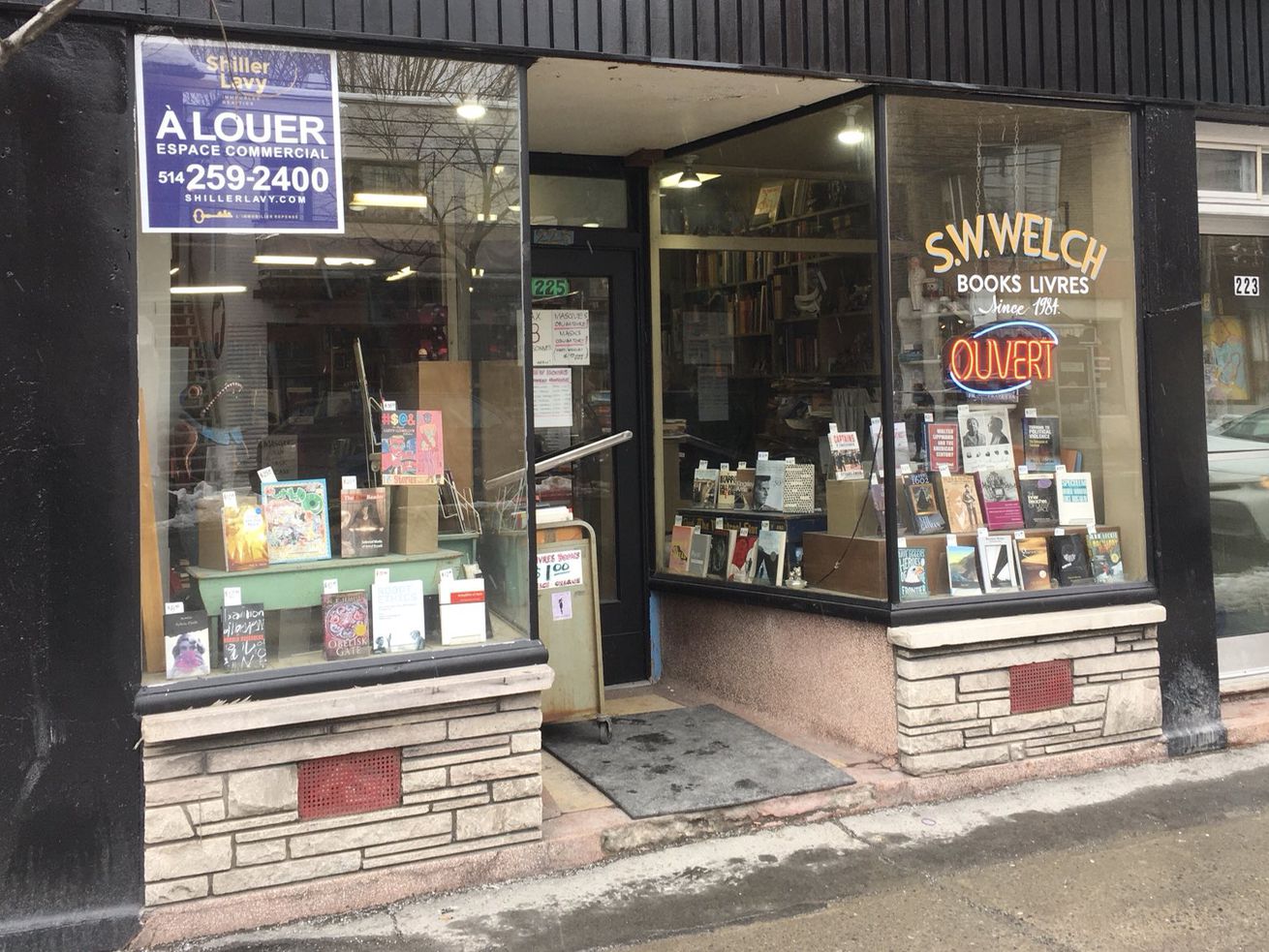 An “à louer” (for rent) sign from much-maligned Montreal real estate firm Shiller Lavy spotted in the window of beloved second-hand bookshop S.W. Welch on St-Viateur Street has reinvigorated concerns about the impact of gentrification on the Mile End neighbourhood and its dining scene.

Well-documented — and massive — rent hikes have over the past several years brought on the exodus of places like queer café and performance space Le Cagibi (now in Little Italy) and patisserie Chez de Gaulle (now in Saint-Jean-sur-Richelieu), both at the hands of Shiller Lavy.

Reacting to the news that the same may happen to an institution like S.W. Welch prompted former Montreal Gazette food critic Lesly Chesterman to share her insight into what a future overrun by Shiller Lavy ownership might look like: “Their idea of a great business is Five Guys. I know that because Lavy told me as much,” she posted to Twitter yesterday. Meanwhile, Montreal community page @FNoMTL reminded followers of the 55 percent rent hike that squeezed the aforementioned Chez Gaulle into vacating its St-Viateur location.

While Shiller Lavy is by no means the sole real estate developer scooping up lots on St-Viateur and elsewhere in the neighbourhood, its purple signs etched in yellow font have become a harbinger of more loss — and more retail chains like yoga-pant brand Lululemon and fancy soap dispenser Aesop. (For the record, other popular St-Viateur restaurants, such as Falafel Yoni and Bishop and Bagg, also rent from Shiller Lavy.) Below is a list of some of the major restaurant-related real estate controversies the neighbourhood has seen since May 2015:

Missing any big ones? Feel free to send us a tip at [email protected]

October 2020: The St-Laurent location that once housed celebrated restaurant Hôtel Herman — was taken over by a shop called Sugar Mamie that sells make-your-own cake pop kits. It had sat empty, clad in graffiti, for over three years, presumably until a tenant with deeper pockets came around.

September 2020: Old Montreal Mexican restaurant La Catrina opens its second location in what was once home to revered café and performance space Le Cagibi. The prime-time location on the corner of St-Viateur and St-Laurent sat empty for nearly two years.

November 2018: Le Cagibi closes its doors after new building owners — Jeremy Kornbluth and Brandon Shiller, son of Stephen Shiller, of Shiller Lavy realtors (which now own the property) — raised the coffee shop’s rent by more than 100 percent, from about $3,400 to $7,500 a month.

August 2015: Thirty-five-year-old Mile End landmark Boulangerie Clarke closes due in part to a rent hike from landlords Shiller Lavy. Sushi restaurant Jinjin took over the space a couple months later, in November 2015. (Frank Servedio, son of Clarke’s founders, revived the name in June 2018 with a café in Pointe St-Charles.)

May 2015: Colombian restaurant Gracias Corazón closes shortly after Danny Lavy and Stephen Shiller purchase the St-Viateur building in 2014. It passes hands a couple times, and is now home to Portuguese chicken restaurant Emilia.

While commercial vacancies have become increasingly ubiquitous in the area for some time, the pandemic has undoubtedly exacerbated the issue (cue this compilation of vacant Mile End storefronts posted by @FNoMTL onto Instagram yesterday). By the looks of it, however, “something is brewing” to stave off the wave of gentrification: Anonymous Montreal eviction satire Twitter account Shitter La Vie — whose name is an obvious gibe at the contentious realtors — is planning a campaign to push back against rent hikes with the help of others who were saddened by the news that another Mile End institution has been “given a death sentence.”