I’ve made this a few times before posting it, because I’ve been trying to solve the problem of it being a bit too crumbly. An egg would do the trick, perhaps, but I was trying to keep it vegan. Chick pea flour left it just as crumbly, and a bit too dry. So here it is, prone to crumbling and all, because it’s easy, tasty, and dietetically sound.
I’ve been just passing the ketchup, but some hot tomato sauce or Mushroom Gravy would also go well with it.
6 servings30 minutes to cook lentils & buckwheat PLUS time to cool1 hour 15 minutes to make the lentil loaf 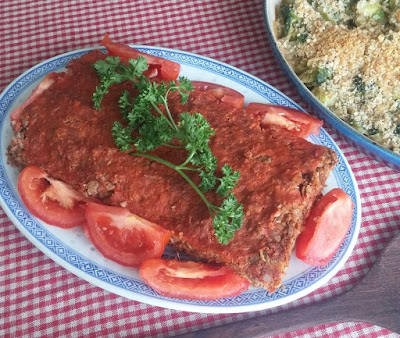 Cook the Lentils & Buckwheat:3 cups water3/4 teaspoon salt2/3 cup green or brown lentils2/3 cup buckwheat groatsPut the water, salt, and lentils into a rice cooker. Turn the rice cooker on. Meanwhile, put the buckwheat groats into a dry skillet over medium-high heat, and toast them until they are a light, even brown. Stir constantly. When the lentils come to a boil, add them to the rice cooker. If they are ready before it boils, turn them into a bowl to stop them from toasting any more. When the lentils and buckwheat are cooked, remove the pot from the cooker and allow to cool enough to handle.
Measure the Seasonings:1/4 teaspoon salt1 teaspoon rubbed oregano1 teaspoon thyme OR savory1 tablespoon sweet Hungarian paprika1/4 teaspoon hot chile flakes2 or 3 cloves of garlic
Measure the seasonings into a small bowl. Peel and mince the garlic, and add it to the spices.

Make the Loaf:1 large carrot1 large onion1 tablespoon mild vegetable oil2 tablespoons apple cider vinegar
3/4 cup finely chopped walnuts1/2 cup tomato saucePeel and grate the carrot. Peel and chop the onion. Heat the oil in a medium skillet over medium-high heat, and cook the carrot and onion until softened and reduced in volume. Add the spices and garlic from the small bowl, and cook for a few minutes more. Stir frequently. Transfer to a mixing bowl and allow to cool enough to handle. Preheat the oven to 350°F. Mix the lentils and buckwheat into the onion and carrot. Add the vinegar and the chopped walnuts, and mix very well. Press the mixture firmly into a large oiled loaf pan, rounding the top slightly. Brush the tomato sauce over it. Bake at 350°F for 45 minutes. Let rest 10 minutes before serving.

Last year at this time I made Carrot, Red Lentil, & Walnut Hummus.