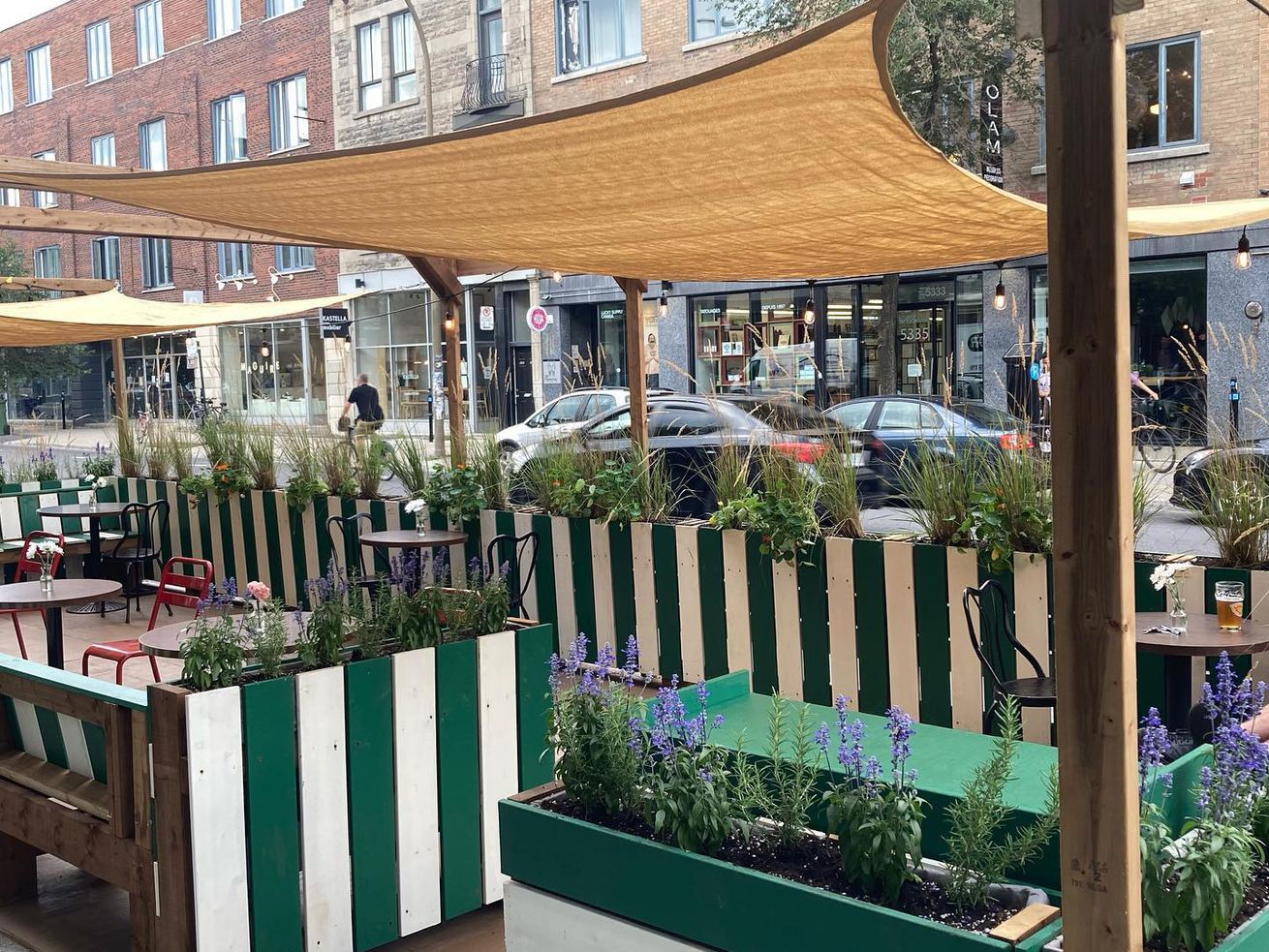 The sidewalk in front of Sparrow Bar is being repaired, and owner Stephen Kamp worries it could limit his terrasse season. | Sparrow/Facebook

Beleaguered restaurants across the city are eager for Premier François Legault to permit the return of terrasse season, which he had prematurely cut off on October 1, last year, barring the possibility of the ad hoc winter patios seen elsewhere in Canada and the US. But for some restaurants on St-Laurent, the city’s upcoming plans to repair the sidewalks in front of their establishments may end up compromising their window of opportunity for street-side dining at a time when welcoming patrons indoors will likely still be off the table.

Stephen Kamp, the co-owner of popular Mile End cocktail bar Sparrow, known for its wooden pews, vintage wallpaper, and stellar brunch service, voiced his concerns on Instagram after hearing of the city’s intention to undertake construction in front of his already struggling establishment, saying:

Instead of rebuilding our patio today, we’re waiting another two months for the city to do a sidewalk repair that they couldn’t do during the last YEAR that all businesses were closed, but that’s so urgent that it cannot wait until October and the end of the terrace season. Another blow to small businesses already beaten. Is it really necessary?

Reached for comment, Kamp explains that the Plateau-Mont-Royal borough emailed him saying that “minor” construction would begin either on May 3 or 10, and would continue on until mid-June.

“I understand that work has to be done. It’s just the timing really, after everything that’s happened in the last year. When we’re right at the edge of our breaking point and we see a hint of something good coming our way, something we’ve been waiting for all winter of being closed since October … they pull it away again with no guarantees of how much longer we have to wait,” Kamp says.

He’s concerned that, with construction projects in the city notoriously prone to delays, the work might carry on past June, “crushing our only opportunity to do anything this summer.”

While terrasse season typically kicks off on April 1 or 15 (depending on the borough), with Montreal still on high COVID-19 alert, both indoor and outdoor dining have been suspended until further notice. When exactly the premier intends to give the go-ahead on commercial terrasses remains to be seen, though June 24, the province’s national holiday, has been touted as the proposed catchall date for a return to normalcy. In the meantime, some restaurants are turning to the city’s parks, and others have placed benches out front where diners sometimes quickly down a bite.

According to CTV, the work being done on St-Laurent sidewalks began last year on the stretch below Mont-Royal, and this year will extend north to St-Viateur. The city told CTV that it couldn’t have delayed the construction any longer “without a major financial penalty,” but now it looks like it is restaurants rather than the city that will be facing financial consequences from the timing.

In a statement provided to CTV, a city spokesperson said that the repairs were advanced by three weeks to free up the sidewalk sooner.

At this point, it’s unclear whether sidewalk reconstruction is slated for the entire stretch or just in a few isolated locations, but Sparrow is certainly not alone in being affected by the work. There are over two dozen restaurants, in addition to many other merchants, on the strip up to St-Viateur. Neighbouring restaurant Caribou Gourmand told CTV that it had also been advised of construction, and St-Laurent newcomer Beau Temps, located just below St-Viateur, tells Eater the same. “It is very bad timing but I guess it has to be done. Let’s hope it all lasts two weeks like they said,” Beau Temps co-owner William Saulnier said in an e-mail.

Even if restaurants aren’t permitted to operate terrasses at the moment, Kamp says tearing up the space in front of his business could limit access to his establishment and deter customers, who might have otherwise lingered out front with a traditional Halifax donair in hand. “Even if we can’t serve out there right now, it’s a lot more attractive to be able to offer a nice space where people could eat their takeout on a bench or whatever than a dusty construction site.”

Restaurants hanging by a thread, but St. Laurent sidewalk to get ripped up anyway [CTV]
With Indoor and Outdoor Dining Still Off the Table, Restaurants Look to City Parks [EMTL]