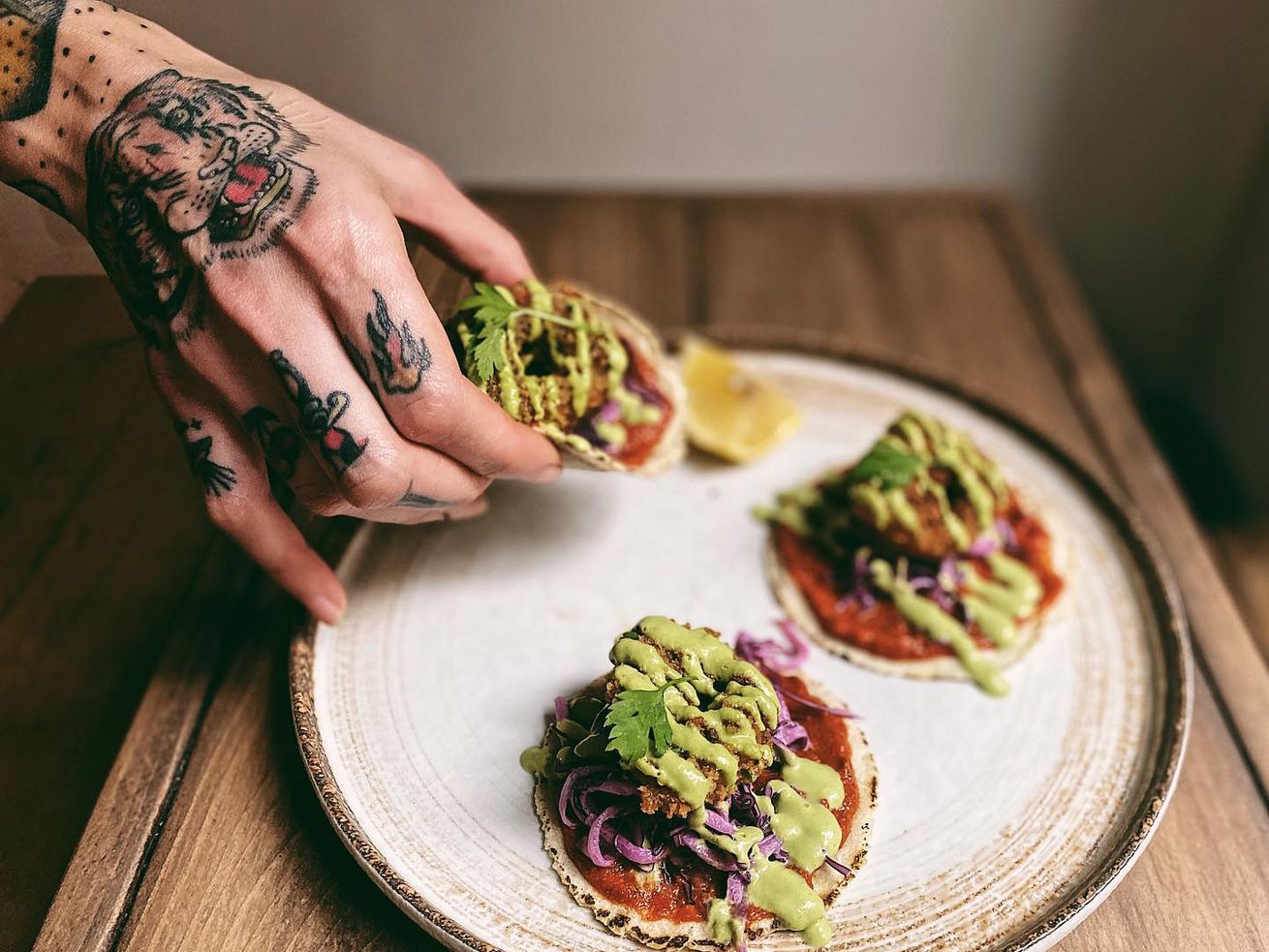 Plus, new Indian in Saint-Henri and microbrews in Hochelaga

LITTLE ITALY — After moving to Montreal a couple years ago, MasterChef Season 8 winner Dino Angelo Luciano has officially opened his first restaurant in Little Italy today, along with chef Sarah Tee (Bowhead, Umami Ramen). With Le Mariachi, Luciano weaves the Southern California flavours of his youth with his love for Mexican food to create vegan dishes like a king trumpet mushroom “calamari” taco with roasted red pepper romesco and daikon slaw or a soy-based asada buritto with fries and guacamole. It’s located in the space once occupied by Le Watson, which quietly closed during the pandemic.

Le Mariachi is open at 26 Rue Belanger, from Tuesday to Saturday, noon to 8 p.m.

ST-HENRI — Caffé Farina on Notre-Dame has a notice of bankruptcy taped to its door at 3422 Notre-Dame West, reveals a photo @yaraelsoueidi posted to Twitter over the weekend. On September 1, the Italian coffee shop, which opened in 2017, had posted to its Facebook page that it would be temporarily closed, with an update to come. Meanwhile, its Instagram bio reads “closed for vacation.” Caffé Farina hasn’t responded to Eater’s request for confirmation.

ST-HENRI — A new Indian restaurant called Golden Thali opened up across the street from Satay Brothers in Saint-Henri last week. The restaurant’s seven-page menu, posted to Facebook, reveals an extensive listing of Punjabi classics, such as butter chicken, biryani, saag, dal makhni, and more. The Notre-Dame Street locale (a couple hundred metres from Caffé Farina) once housed Portuguese restaurant Lisboa Porto, which closed in February of this year.

OLD MONTREAL — After 46 years, Old Montreal bar and performance venue 2Pierrot has announced that it will shutter as a result of the financial blowback of the pandemic. The news was shared on Facebook by the bar’s owner, Marilous Sciascia Ruel, who is also daughter of its founder. In an interview with the Montreal Gazette, Sciascia Ruel said that despite the government subsidies, reopening the 700-person establishment no longer felt like a possibility. The bar will host a virtual farewell show on December 12.

PLATEAU — The prime Plateau location occupied by Pâtisserie do Rosário for 25 years — the pasteis de nata powerhouse now has a larger storefront on St-Hubert Street — has morphed into a Lebanese café by the name of Chez Téta. From a space outfitted with concrete floors, marble counters and wooden bistro tables, the team serves fattoush and tabbouleh salads, classic dips (hummus, labneh, muhammara, and baba ghanoush), plus a selection of man’ouche, a traditional flatbread dressed with a variety of toppings. “Téta” means “grandmother” in Lebanese and the menu is an homage to one of the owners’, whose face also graces the restaurant’s signage.

PLATEAU — Family-run Vietnamese restaurant L’Harmonie d’Asie has been renamed District 4, referencing the smallest urban district in Ho Chi Minh City, which spans four square kilometres. “Once a mafia hotspot, it’s now renowned for its local daily life and for its delicious street food. This is where it all started for our family,” an Instagram post describing the rebrand explains. The revamped menu features classics like chicken and beef banh mi, lemon grass chicken brochette, pho, and more.

A post shared by Microbrasserie Mutoïde (@microbrasseriemutoide) on Nov 1, 2020 at 10:42am PST

HOCHELAGA — A new bar and microbrewery opened steps away from Préfontaine metro in Hochelaga-Maisonneuve a couple weeks ago. Mutoïde is the brainchild of three former colleagues who worked as waiters and bartenders in the neighbourhood over the past 10 years, according to this Métro article. Until red zone restrictions ease, it is offering beer for takeout: a hoppy Kellerbier blond or a slightly sour West Coast Pale Ale, both in 32 oz growler form.