I know it’s the end of October, but if you want to make this particular recipe you will need to start by making mincemeat, and the time to make mincemeat is now.

As you may suppose, this pudding was actually made last year at Christmas time, and it was one of my earliest attempts at a very low-sugar dessert. The mincemeat was sweetened in a fairly typical way, as I had already made it before I got the news that I was pre-diabetic, and pre-diabetic or not, I am too cheap frugal to throw away perfectly good food, especially something like mincemeat that I had put a fair bit of work into. So I made it into pudding, and the only other sweetness came from the cooked carrots and a little in the custard sauce. The results were actually very good, I thought. If you want to do this yourself though, I suggest you taste the batter and add a little more sugar to taste once it is mixed.

I have to say, looking at this recipe makes it very clear that summer is well over (yes, brrrr), and we are rapidly hurtling into a new season… 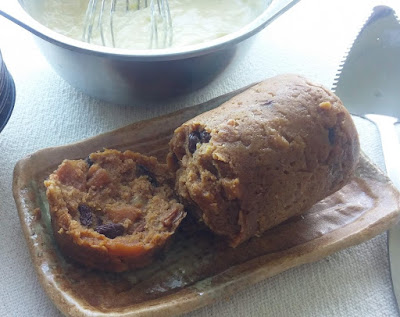 Peel and slice 2 medium carrots and boil them in a little water until quite tender. Drain them, mash very thoroughly, and measure them into a mixing bowl. Mix in the mincemeat and the spices. Beat in the eggs and vegetable oil.

In a smaller bowl, measure and mix the dry ingredients.

Grease 3 or 4 500ml wide-mouth canning jars or a 2-quart pudding mold. Set up a steamer so that the jars or mold will be held above the boiling water, and start it boiling.

Mix the dry ingredients into the wet ingredients gently but thoroughly. Divide the batter evenly between the jars (3 jars will make 3 puddings of 2 or 3 servings each, 4 jars will make 4 jars of 2 servings each) or scrape it into the mold. Cover the tops of the jars or the pudding mold with a layer of parchment paper then a layer of aluminum foil, and keep it in place with string or elastic bands. Put the pudding(s) into the steamer and steam until firm; about 25 to 30 minutes for the jars or 1 hour for the large pudding.

I made 3 jars of pudding and I found they rose beyond the top of the jars. As soon as they were removed, though, they began to cool and shrink back down at once. I removed and discarded the paper and foil, and poured a little rum over each, then capped them with sterilized lids. I put them back in the steamer for another 10 minutes. They all sealed very well, and we ate the final pudding 3 months later. I did keep it in the fridge for that time, although the cold cellar would have been fine too, I’m sure.

Heat the double boiler to a simmer and cook, whisking regularly, until the custard thickens. Remove it from the heat and whisk in the rum. Allow to cool and serve, warm or cooled, on the pudding.

Last year at this time I made Roasted Chile-Garlic Tofu & Broccoli.