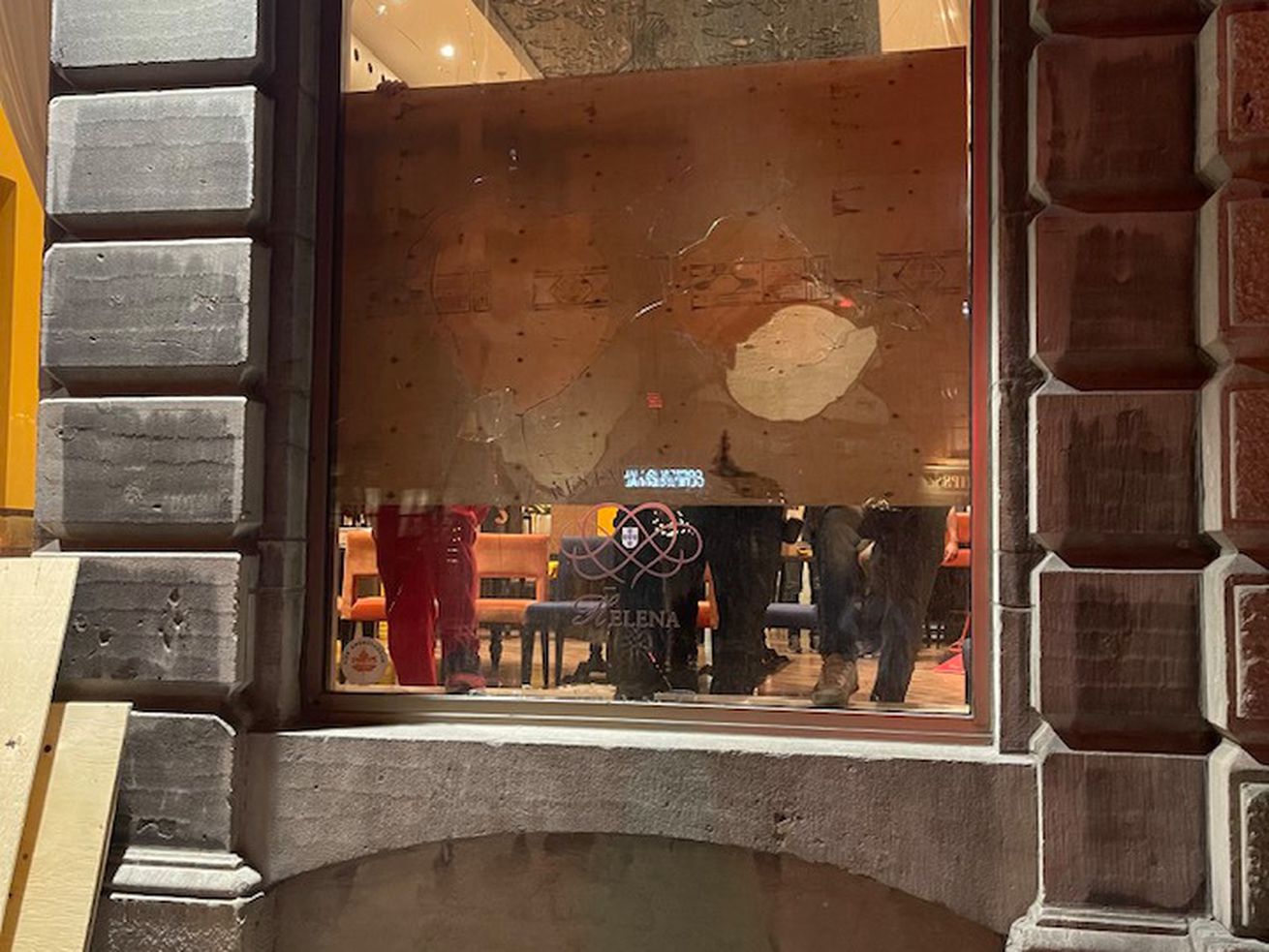 Brit & Chips, Un Po’ Di Piu, and La Catrina are among the restaurants that documented damages caused by the riot on social media

A number of Old Montreal restaurants are facing costly damages for repairs resulting from some individuals involved with Sunday night’s anti-curfew protests, who went on to vandalize surrounding businesses following the gathering.

Throngs of protesters assembled on Sunday evening at Jacques-Cartier Square calling for freedom, in defiance of the curfew, which was that night being rolled back to 8 p.m., after being pushed to 9:30 p.m. last month. Soon after, they dispersed into smaller groups, some of which proceeded to set fire to garbage cans and shatter storefront windows in the area.

Yesterday, the following day, a number of restaurants in Old Montreal posted to social media documenting the damages sustained — most frequently broken windows in need of repair — and their feelings of exasperation.

Posted by Brit & Chips on Monday, April 12, 2021>Daniel Loureiro, who co-owns Helena with his mother, seems to have been the first restauranteur to post a photo showing a broken window to social media on Sunday at 9:55 p.m., shortly after the rioters passed through McGill Street. “Tonight, with tears in my eyes, I publish this photo sent by friends and clients. Tonight, I cry the despair…” he wrote.

What came next was a steady stream of similar photos, from other restaurants also reacting to similar damages, and then having to clean them up, file insurance claims, and board up windows in anticipation of new ones being installed.

Dyan Solomon, who owns Un Po’ Di Piu (as well as Olive + Gourmando, which seems to have gone unscathed), posted to her stories on Instagram, criticizing the group for unleashing their derision toward Quebec Premier Francois Legault and his public health measures onto businesses who are largely just as confounded by them. “Just another expense. Another headache. More anguish. Like restaurants and small businesses have anything to do with your rage?!?!” the post read.

For restaurant owners, the damages add insult to injury at a time when they are still grappling with a government-mandated closure that went into effect on October 1 and a lack of reliable and sufficient aid from the province. In Old Montreal, the pressures are compounded by the ongoing absence of tourists and office workers, which have historically fuelled the area, otherwise low on residents.

The damages didn’t end there. The owner of Italian restaurant Quattro, on Notre-Dame Street, told Montreal Gazette that he found a metal no-parking sign inside the restaurant after arriving on the scene, likely one similar to that which can be seen being thrown into a storefront in a now widely circulated video.

On Monday, taco-and-more joint La Catrina, on de la Commune street, also posted to Instagram a photo of smashed windows, accompanied by a sobering message directed to those who caused the damage (originally in French but translated here):

Our restaurant, located on rue de la Commune in Old Montreal, was the victim of vandalism last night. We would like to underline our understanding of the frustration generated by the return of the curfew at 8 p.m. What we do not understand is the choice to use violence against businesses already badly affected by the situation. Demanding more conciliatory measures from the government on the one hand, and breaking the windows of suffocating businesses on the other is contradictory. We share your anger. But it’s the arguments behind that anger that should be in the news this morning, not your acts of violence.

Let us show solidarity and resilience.

Montreal’s restaurateurs have been among some of the most critical of a provincial administration they feel has largely overlooked their plight as an industry, which presumably makes being on the receiving end of anti-Legault backlash all the more infuriating.

Protestors gathered for a second night in violation of the curfew on Monday, but in Downtown Montreal instead. There haven’t been any reports of related damages to restaurant in that area yet.