I’ve made cabbage with paprika before, but this is a simpler and lighter version, good as a quick side dish with something else. It’s a pretty traditional cabbage dish from the Balkans on down through Turkey. It often has beef in it; not necessarily a lot of meat, but some. About half a pound for this quantity of cabbage, if you wanted to add it. It could be finely chopped stewing beef or ground beef, in which case it should be cooked in the oil until pretty much done before the onion goes in. Or, you could add leftover chopped up steak or roast, and add it with the cabbage.
We had it without any meat though, and thought it was just fine. We ate it alongside a fairly cheesy vegetarian main dish. If you are not adding beef to it, it would also go with lamb, chicken, or fish very well.
4 servings30 minutes – 10 minutes prep time 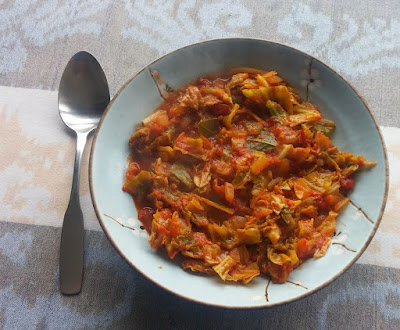 4 cups loosely packed chopped cabbage1 small onion1 tablespoon olive oil2 teaspoons sweet Hungarian paprika1/4 to 1/2 teaspoon Aleppo pepper1/4 teaspoon saltfreshly ground black pepper to taste1 bay leaf1 cup crushed tomatoes
Wash, trim, and chop the cabbage fairly coarsely. Peel and chop the onion.
Heat the oil in a medium skillet over medium heat. Add the onion and cook for 3 or 4 minutes, until soft and translucent but not browned. Mix in the cabbage and cook, stirring, until it is evenly wilted down. Add the seasonings and cook for another minute or so, until well worked in and moistened completely by the oil.
Add the tomatoes and mix them in. Continue to cook, stirring occasionally, for another 10 or 15 minutes until the cabbage is done to your liking. Serve at once.

Last year at this time I made Anglesey Eggs.