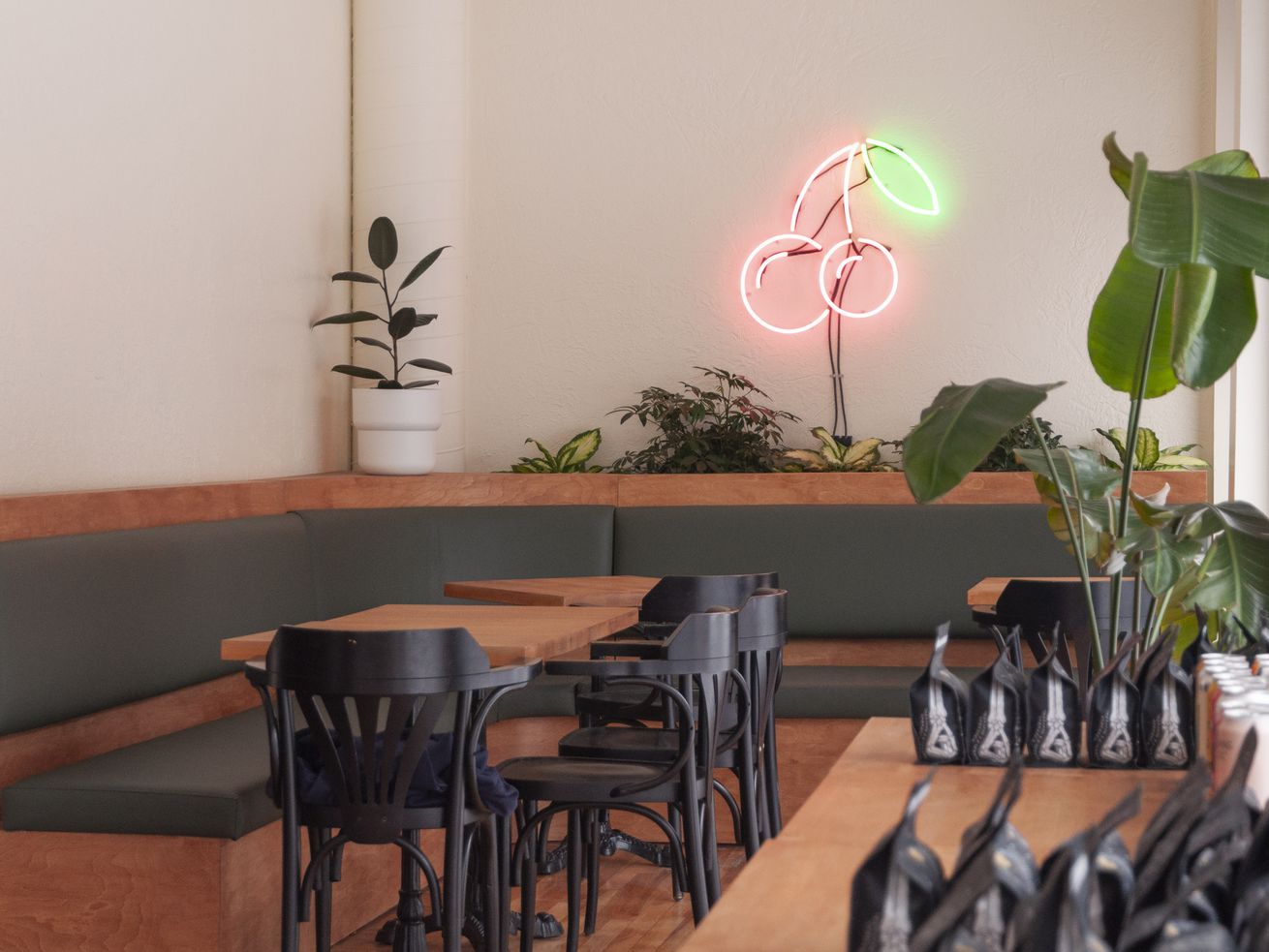 But for now, at Cafécoquetel, the cappuccino is to-go and the drinks are booze-free

The segue from late-morning oat milk latte to early-afternoon dark and stormy will no longer require a change of scenery — in Villeray at least. The neighbourhood is now home to Cafécoquetel, a cozy new haunt that plans to serve boozy drinks as of 2 p.m. daily, but in a laid-back, well-lit, café-like setting.

“Working at a coffeeshop for four years, I’ve seen so many people have two, three, or more cappuccinos throughout the day, and they can get pretty jittery. The thinking was that maybe it’s 3 or 4 p.m. and you want to stay in the same environment for a little longer, but you’d just rather have a gin tonic or glass of wine instead,” says co-owner Gabriel Lavallée. Before opening Cafécoquetel, he worked as a barista at Belanger Street’s much-loved Paquebot café, becoming one of its owners mid-way through the stint, and before that as a creative director in advertising.

He’s joined by co-owner Pénéloppe Tancrède, a bartender with a journalism degree, who previously worked at nearby Brasserie Harricana and local microbrew shop Cheers in Pointe-Saint-Charles. The pair met while working at an event under the banner of Lavallée’s former side project, cocktail service Le Tigre Bleu. While the couple are self-proclaimed lovers of all things beverage, they balk at the idea of being called mixologists.

“We think the term is really overused in the media. What is a mixologist? The science of blending flavours and knowing how to blend them? We read books, blogs, articles, and we try to learn as much as we can from the best in the community, but we don’t invest all our energy in the theory of flavours,” Lavallée says. What knowledge they have acquired was gleaned from at-home experiments and lessons passed on from peers at their respective jobs. 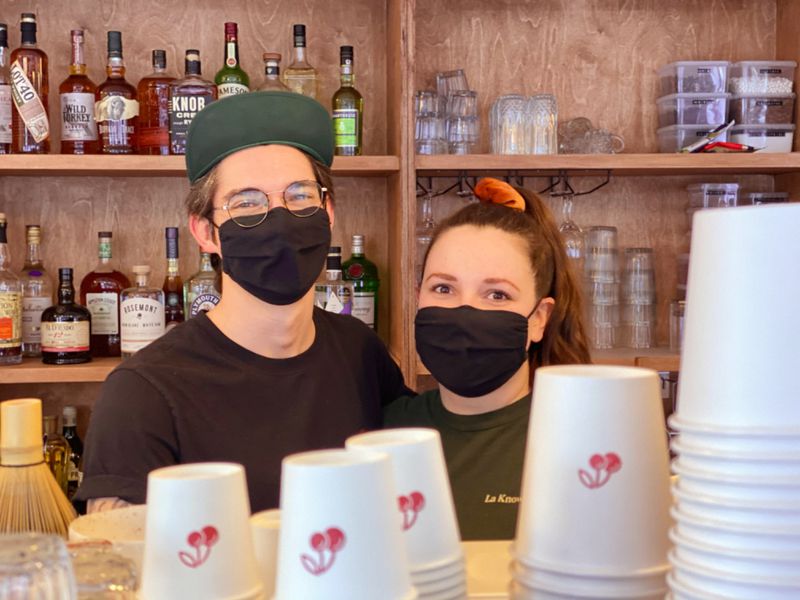 Cafécoquetel/SuppliedGabriel Lavallée and Pénéloppe Tancrède, the owners of CafécoquetelWith the pandemic still dictating dining operations, patrons can, for now, expect an abridged offering of alcohol-free cocktails, wine and beer to go, and all the warm beverage staples, with beans sourced from Zab roasters, just like at Paquebot. On the food side, Cafécoquetel has tapped Marie-Florence Gagnon, who previously worked as garde-manger at not-too-far-flung La Récolte, which sadly folded a couple months ago. For now, the snacking menu is stacked with soups, salads, and grilled cheese, and focuses on sustainable, seasonal ingredients, as it did at her alma mater.

“She’s used to making the most of the elements that are at her disposal,” Lavallée says. “Whether it’s in the kitchen or the bar, we really want to share and use everything. So if she has a leftover orange peel for example, we can do something with it for a cocktail, or maybe we just make a soup with everything at the end of the day.”

A small kitchen, wedged right by the bar, facilitates that exchange. The space was designed by the owners and their woodworker friend, with the goal of conveying something in between cool, third-wave coffee shop and timeworn Irish pub. That’s achieved with a careful balance of warm, rusty hues and the wood that decks most surfaces in the space, punctuated by minimalist suspended lighting, white tiling, lots of greenery, and some neon signage of their already-recognizable cherry logo. (The pair landed on the symbol for its ubiquity: Etched on human bodies in the form of cheesy tattoos or forever rotating in slot machines, the cherry, they hoped, would evoke a sense of familiarity and timelessness.) 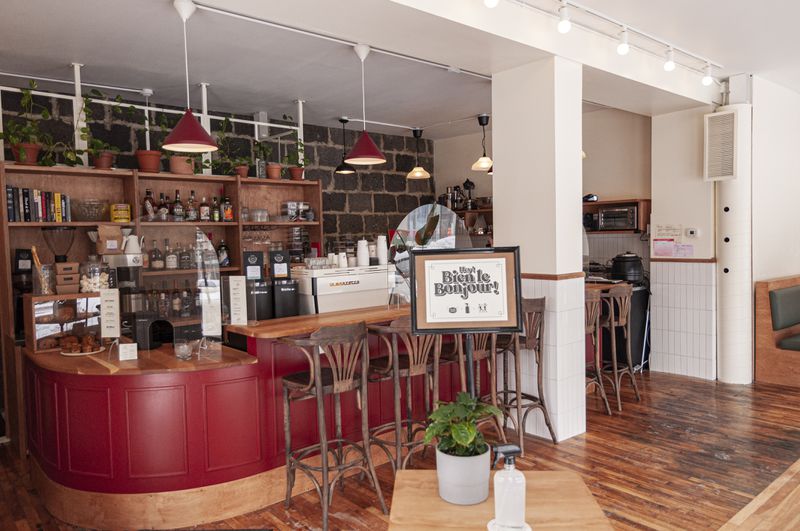 Cafécoquete/SuppliedThe café-hybrid bar is located on a quiet, unassuming corner, 10 minutes away from where the couple lives, in a space once occupied by Italian coffeeshop Via Berri. “We really, really wanted a place in a residential part of Villeray and not on a main street, but there weren’t many available to us, until the pandemic,” Lavallée says, explaining that the couple hesitated, wondering whether finally concretizing their idea at time when shutters had become rampant in the city was wise. “But getting that space felt like a one-in-a-million kind of chance,” he said.

After signing a lease for July 1, Lavallée and Tancrède set out to get to know their prospective customers. Combining Lavallée’s background in advertising and Tancrède’s in journalism, their initial plan was to leverage Facebook and Instagram ads for publicity. But then, they watched Netflix’s The Social Dilemma, the 2020 documentary that puts into sharp relief the manipulative algorithms of our social media overlords. “It really broke us,” Lavallée says. “We realized this is not the way that we want to first come into contact with our clients.”

Instead, they taped a cursory note to the front door of 426 Faillon East once construction got underway, and hoped that passersby might take interest in the ongoing hammering, if nothing else. And they did. Neighbours stopped to chat and Cafécoquetel’s online following grew, with many sending words of excitement and encouragement. In the fall, before even opening the doors to their new project, the couple had already managed to sell 40 or so cherry-emblazoned t-shirts and 60 gift cards. “It’s not much, but it helped us have a little money coming in before we were ready to open. Mostly, it got the conversation going with our neighbours,” Lavallée says.

Cafécoquetel is open Thursday to Tuesday from 9 a.m. to 6 p.m. at426 Faillon East. Once dining rooms reopen, hours will be extended to 9 p.m.