I’ve made Saag Paneer a few times over the years with the idea that I would post it on this blog. All my attempts have been okay, but did not leave me feeling like it was the best Saag Paneer ever. I’m not sure this is either, although we found it very satisfactory. I suspect the best Saag Paneer ever contains more in the way of butter and cream. This is a dish that also tends to contain tomato; while it’s not really in season at the moment, canned crushed tomatoes would be perfectly fine. However, so many of the Indian (inspired) dishes I make have tomatoes in them that I wish to have a few in my repertoire that don’t have any, just to supply a little contrast. Garden spinach should be at its peak right now, but alas – the up-and-down weather we’ve had all spring (and through the winter too, really) was very hard on it and the mice have found it too. This may be it for our spinach this year.
4 to 6 servings1 hour prep time 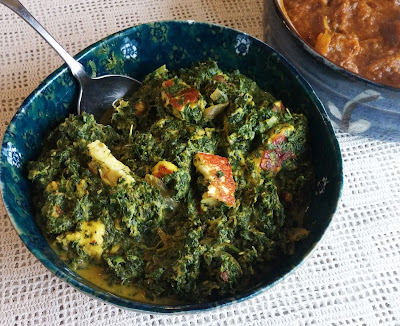 Get Started:600 grams (20 ounces) blanched spinach OR other mild, tender greens250 grams (1/2 pound) paneer OR halloumi cheese1 teaspoon mild vegetable oil1 large onion1 tablespoon mild vegetable oilWash the spinach or other greens very well, and chop them coarsely. Put them in a colander and pour boiling water evenly over them to wilt them thoroughly. Rinse them in cold water, drain them well and squeeze them dry. Chop them finely and set them aside. Rinse and drain the paneer, and cut it into small cubes or lozenges (small bite-sized). Heat a skillet over medium heat with the oil – just enough to put a film over it – and cook the cheese on both sides until golden brown. Transfer to a dish and set aside.
Peel and chop the onion. Heat the oil in the skillet, and cook the onion gently over medium heat until softened and translucent. Add it to the prepared greens.  Prepare the Spices:1/4 to 1/2 teaspoon salt1 teaspoon cumin seed2 teaspoons coriander seed1/8 to 1/2 teaspoon hot chile powder1 teaspoon ground turmeric1 tablespoon finely grated fresh ginger3 or 4 cloves of garlic
Grind the cumin and coriander with the salt, then mix them with the remaining spices in a small bowl. Peel and grate the ginger and garlic and add them. Set aside.
Finish the Dish:
2 teaspoons mild vegetable oil2/3 to 3/4 cup thick yogurt  1/2 lemon, cut in wedges (optional)
Heat the oil in a large heavy-bottomed pot over medium-high heat. Add the bowl of spices, and cook, stirring constantly, until fragrant. Add the blanched spinach and onion and mix in well.  Begin working in the yogurt, a scoop at a time until the mixture has reached a level of creaminess that seems right to you. Once it is hot through, add the cheese and continue to simmer until it too is hot through. Serve at once, although this re-heats quite well so it could be made in advance.

Last year at this time I made Barley with Sorrel.