It seems that once a year or so, it’s duck week. Here we are! As usual, I am going to try to make a 6 pound duck last for three meals, with my Mom joining us for some of them. I definitely want to get every bit of goodness out of a duck. On that note, I’m putting a reminder at the end of the recipe to be sure to use the carcass to make stock, because that’s definitely part of the deal. I’m going to use some of the stock for the next recipe, but at some point we’ll also just have duck soup with noodles – not even counted as one of our three duck meals.
I’m being vague about the seasonings, but I’ve been using the Polish seasoning found at the beginning of this recipe a lot, and that’s what I used here. You can season it however you like, though. I kept it pretty simple because I mostly wanted to see how duck did cooked low and slow like pulled pork. I have to say, it stayed firmer than I expected, but it worked well enough. Also, people always seem to want to put all kinds of sticky sauces on duck, when it is perfectly lovely served quite plain.
6 servings8 hours, yes I said 8 hours – 20 minutes prep timeNOT including time to thaw out duck 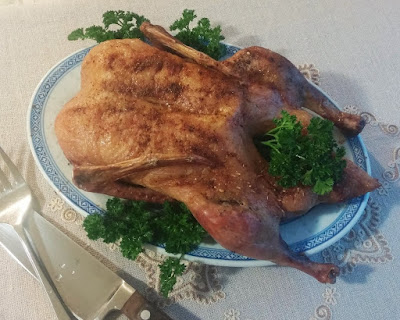 If your duck is frozen, you must allow 2 full days in the refrigerator to thaw it out.
Remove the duck from the packaging and pat it dry. Remove anything in the cavity (likely just the neck) and save it for making broth later. Sprinkle the duck with salt and rub it in, then let it sit for about 1 hour.
Preheat the oven to 225°F. Put the duck on a rack in a roasting pan. Season it with pepper and any other seasonings you like – I used a Polish seasoning. Pour in the chicken stock, without getting the duck wet.
Put the duck in the oven and roast for about 6 hours, until it is well done and the leg wiggles a bit. If the skin is not as dark and crispy as you would like, turn the heat up to 400°F and roast for a further 15 to 20 minutes until it is coloured and crisped to your liking. Remove it from the oven, transfer to a platter, and cover it loosely for 10 minutes. Carve and serve. Meanwhile, make the gravy. Scrape the contents of the pan into a gravy separator, and drain the juices back into a saucepan over medium heat. Keep the fat! It is a culinary treasure. Whisk the flour into 1 cup of cold chicken stock until smooth, and slowly whisk it into the saucepan, to get as smooth a gravy as possible. When it thickens and bubbles around the edges, transfer it to a gravy boat.
Once the meal is done, pull all the remaining meat from the bones. Keep the meat for other dishes and make broth with the bones. Break them up and put them in a pot – I prefer making broth in the Instant Pot these days, but a good heavy-bottomed soup pot is still as good as ever. Add some onion, celery and carrot scraps if you have them, and a bay leaf or two. Go light with the bay leaf if using an Instant Pot; I find it a little too efficient at extracting all the flavour from it, including bitterness. I threw in a few juniper berries and a dozen black peppercorns. Add 2 quarts of water and 2 tablespoons of vinegar. Don’t forget to add the neck, if you have it. I gave it 2 hours in the Instant Pot, then leave it for natural release/ If you decide to simmer it on the stove-top it will take about the same amount of time (which is to say about three hours) ; you will just need to check it from time to time, and maybe add a little more liquid.Strain the stock and chill it overnight. Remove any fat from the top and add it to your stash.
Last year at this time I made Brussels Sprouts with Buttered Mushrooms.