I’m always lured in by attractive photos of things, in this case bright green spinach wraps. Unfortunately, to achieve a bright green wrap, you need to use white flours and much less spinach, and not let them get browned at all, so mine came out a quite dark khaki colour. Still, very tasty! They are modeled on these Buckwheat & Flax Meal Tortilla Wraps I made a while back. I have to say, I’m happy to have tried these, and they were good, but I’m much more likely to make the plain ones in the future; in fact I have been making them regularly already. They are extremely useful and one of them has about 2/3 the net carbs of a slice of the best bread that I can get. (Not talking about super low-carb “breads”, which are pretty much unspeakable.)

We had these for breakfast, wrapped around a cheesy omelette, which went very well with the spinach. You can make these all year round with frozen spinach, and in fact I would recommend it over fresh.
4 to 6 tortilla wraps40 minutes prep time 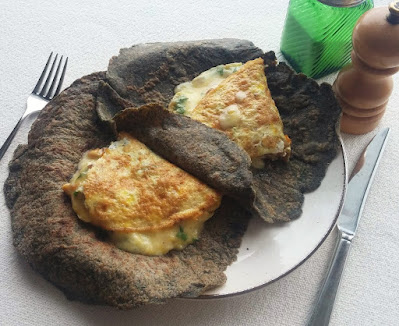 1 cup finely re-ground flax seed meal1/2 cup potato starch2/3 cup buckwheat flour3/4 teaspoon salt120 grams (4 ounces) cooked chopped spinach1 cup boiling waterabout 1/4 cup buckwheat flour to roll
Regrind the flax seed meal in a blender until very fine. Put it in a mixing bowl with the potato starch, buckwheat flour, and salt. Mix well.
Put the spinach in a blender and chop extremely finely. It will be necessary to stop and scrape down the sides several times. Add the flour mixture, about 1/3 at a time and process it in until you have a very fine, sandy mixture. Turn this back into the mixing bowl.
Bring some water to a boil and immediately measure out 1 cup of it and stir it in quickly, until it forms a ball. Let the dough rest for a minute or two until you can handle it, then divide it into 4, 5, or 6 equal pieces. Set them on a plate.
Heat a griddle over medium-low heat. Using a sheet of parchment paper or very clean countertop, roll each piece of dough into a very thin circle. It’s easiest to flatten it into a hockey puck-shaped disc to start. Dust with plenty of buckwheat flour to prevent it from sticking. As you roll each wrap, stack them on another plate. When the griddle is warm and you have rolled about 3 of them, begin cooking them, for 2 minutes on the first side and about a minute on the second side. Stack them on another plate as you work… if you are speedy enough, you can transfer the last couple of balls of dough to the edge of the parchment and use that plate rather than dirty another. Continue until all the balls of dough are rolled and cooked. The dough gets harder to work with the longer it sits, so it needs to be rolled promptly.

Last year at this time I made Barley & Spelt Scones, and updated Sweet Potato Waffles. Apparently this time of the year involves a few last kicks at the baking can…