Since I’ve discovered that bulgur is actually a pretty good carb for me to eat, I’ve been experimenting with making Kibbeh and things that resemble Kibbeh. When I made that first, meat-based version, I mentioned that there were vegetarian versions, and here is one of them. Squash makes an excellent “cement” to hold the bulgur “gravel” in place. Maybe not the most appetizing metaphor, but try it, you’ll like it! Mr Ferdzy was much keener on this than he usually is with squash dishes, perhaps because there is lots of spice and the bulgur changes the texture.
I am not mentioning in the instructions that you must have your squash and your chick peas cooked in advance, but you must, probably the day before. If you opt to use canned chick peas little will change, but if you opt to use canned pumpkin you should be prepared to add a little liquid to the outer shell paste. It should be soft enough to mold, but neither sloppy nor too stiff and dry. I suppose I should also mention that if your home-cooked squash is very wet, it may need to be drained! Most of the recipes I looked at called for boiling the squash. I baked mine, as I pretty much always do, and it was fine as it was.
I should note that I have scaled back this recipe to fit a 10″ pie plate. I actually ended up with about a kibbeh and a half. The portion in the photo got wrapped and left in the fridge for 2 days before I baked it, and that seemed to work just fine. Probably you could freeze it too. In either case it should be well thawed and/or taken from the fridge to warm up to room temperature before baking, and you should add an extra 10 or 15 minutes to the baking time; the 30 minute baking time assumes it goes into the oven with filling still quite hot.
4 to 6 servings1 hour 15 minutes – 40 minutes prep time NOT including cooking the chick peas OR squash 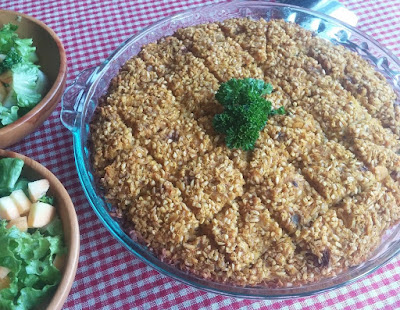 Peel and chop the onion, and prepare the chard or other greens. Heat the oil (you can use the skillet you used to cook the first round of onion) and cook the onion until softened and translucent. Mix in the well-drained, chopped chard and cook, stirring frequently, until well wilted down. Season with the sumac, molasses, salt, and pepper.
Remove the pan from the heat and mix in the chickpeas, pumpkin seeds, and sunflower seeds. Preheat the oven to 375°F.
Lightly oil a 10″ pie pan or similar shallow baking tray. Press about 40% of the pumpkin-bulgur mixture evenly over the bottom of the pan. Spread the chick pea and chard filling evenly over it. Spread the remainder of the filling evenly over that – it is easiest to divide it into 3 or 4 sections and flatten it in your hands as much as you can, before placing it and working it together with the other sections. Pat the assembled kibbeh out to be perfectly flat, and score it with a knife into diamonds. Brush the olive oil over it, and bake at 375°F for 30 to 40 minutes until golden brown and firm.

Last year at this time I made Pear & Endive (or Arugula) Salad with Lemon-Cardamom Dressing.