This is the time of year when I generally make a dessert with frozen strawberries, often modeled on some other dessert that doesn’t have strawberries. This one is based on Lemon Sponge Pudding.
There was just one problem: I couldn’t get it to work. It just would not separate into layers. I tried multiple times, but no dice. However, I have to say that all the failures were hoovered up, because this is some delicious stuff regardless, so eventually I gave up on trying to have that magical separation happen during baking and just cheated. Put some strawberries in the bottom of the dish(es), ladle on the foam, and bake. Looks like strawberry sponge pudding. Tastes like strawberry sponge pudding. I hereby declare it strawberry sponge pudding, and it is good.
Note that having done that, I have listed the strawberries in 2 lines, as they go into it. You will need a total of 2 1/4 cups once puréed, so a bit more than that as frozen lumps.
4 servings40 minutes – 15 minutes prep time 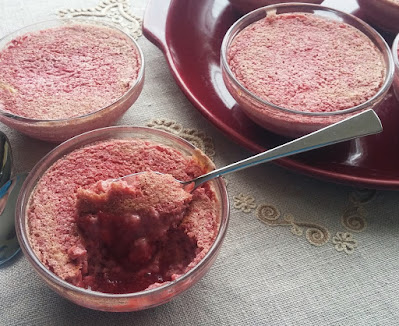 3/4 cup mashed thawed from frozen strawberries2 tablespoons unsalted butter3 tablespoons sugar2 tablespoons barley floura pinch of salt2 large egg yolks2 large egg whites1/8 teaspoon cream of tartar1 1/2 cup puréed thawed from frozen strawberries
Preheat the oven to 350°F. Set out 4 1-cup custard cups on a baking tray. Divide the first quantity of mashed strawberries evenly amongst them.
Cream the butter and sugar in a mixing bowl, and when light and fluffy work in the flour and salt. Break in the egg yolks, putting the egg whites into another mixing bowl, and beat them in well. Add the cream of tartar to the egg whites and beat them with an electric mixer until stiff.
Fold the puréed strawberries into the sugar and egg yolk mixture. Fold in the beaten egg whites very carefully, keeping it all as light and fluffy as possible. The batter will be quite soupy. Ladle it evenly amongst the waiting custard cups and bake at 350°F for 24 to 27 minutes.