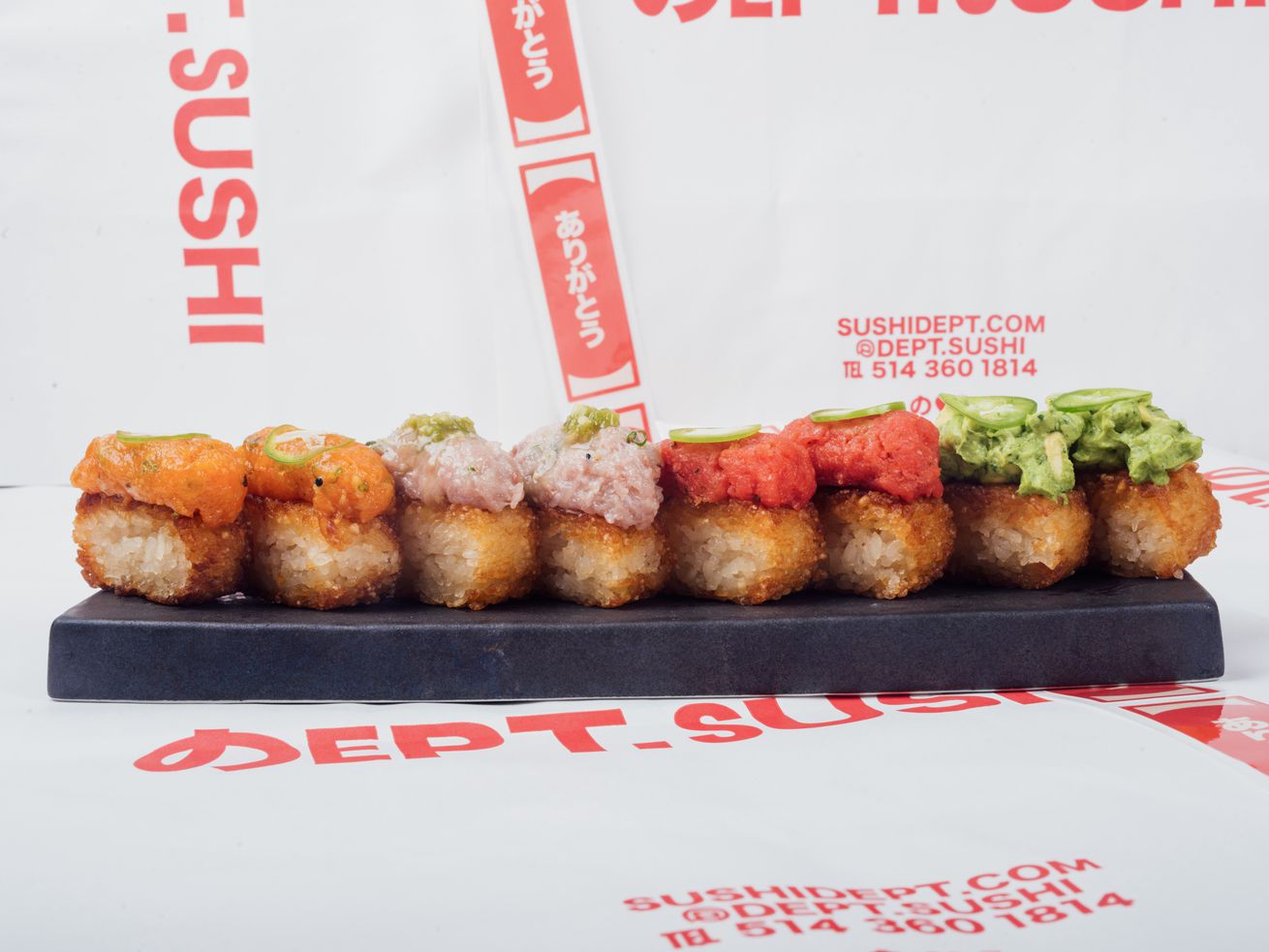 The new spot will serve up items with the same sustainably sourced fish, but at a more accessible price point

One of the season’s most anticipated restaurant openings is set to take place tomorrow (April 28) — though, technically, it’s more of an online shop with a pick-up counter.

Sushi Dept will begin taking orders from a tidy menu of both classic rolls and creative specialties, and owner David Dayan says diners can expect the same sustainably sourced fish that put his reputable upscale sushi bars Ryú on the map. There’s one crucial difference though, and it’s likely to be a selling point for anyone who’s consigned Ryú to the special occasions-only category: a more accessible price point.

In addition to a solid selection of makis, nigiris, hand rolls, and poke bowls, Sushi Dept is offering a light and airy take on popcorn shrimp, a “club sandwich” that alternated tempura shrimp and scallop with avocado and crab stick, and an lineup of “crispy rice,” its term for miniaturized rice cakes piled with raw toppings like avocado and truffle, and yuzu-flavoured salmon tartar.

In addition to splurge-worthy Ryú, Dayan also owns nearly one-year-old Griffintown Mediterranean restaurant Ayla and café and matcha bar Livia on Sainte-Catherine, which last year was accorded its own online counterpart, Livia Sweets. That project will now be sharing its Laurier Street takeout counter and kitchen with the restaurant group’s newest arrival. (The space was once home to a Ryú outpost, so in that way it’s getting back to its sushi roots.) 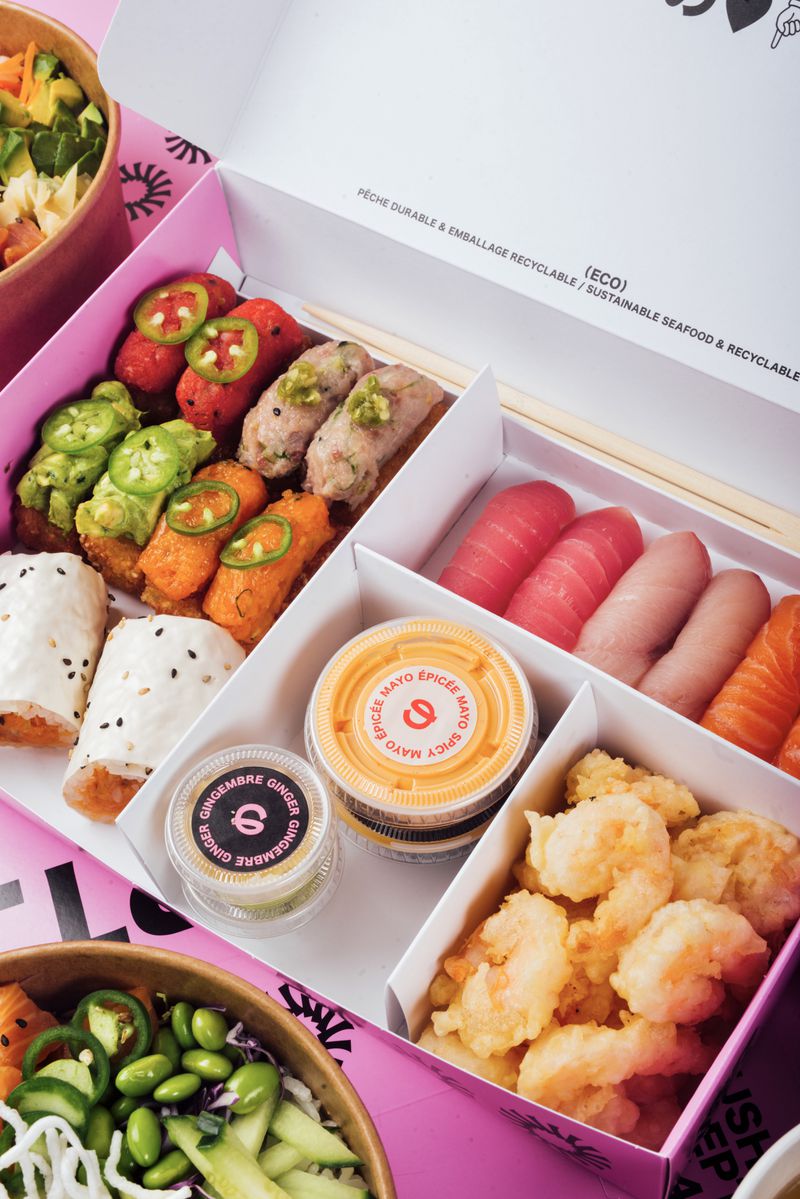 Sushi Dept/SuppliedSushi Dept’s neon pink bento boxes filled with nigiri, hand rolls, crispy rice, and popcorn shrimp.How exactly does Dayan plan to lower prices without tinkering with the provenance of his fish? There are the obvious savings that come from nixing indoor service, though Dayan says, simplifying menu items was another key strategy. “Seafood is very expensive in Montreal, so what we tried to do is make sure that the makis we are making are less time-consuming than they are at Ryú, so that we are able to make more orders in the same amount of time,” he says.

Dayan points to Sushi Dept’s “Wasab Hamachi Maki,” with cucumber, avocado, and sliced serrano, which, at $13, is a more affordable take on Ryú’s wildly popular “Hamachi Baby,” at $18.50. The interiors of the rolls at both restaurants are virtually identical, but at Ryú, they are topped with an extra slab of fish and a jalapeño salsa that is “very labour intensive” to make, Dayan says. “It’s changes to details like these that I believe allow us to still offer a great product, but at a lower price.”

Omitting certain sauces also helps to ensure that the rolls, packed in cheery neon pink, and eco-friendly, bento boxes, can withstand the time elapsed between making the sushi and consuming it — something that wasn’t necessarily top of mind when Ryú first came into existence. As for the delivery itself, Dayan says an in-house team of drivers has it covered, though if customers still prefer passing their orders through third-party behemoths Uber Eats or DoorDash, they’ll be able to.

For all the savings that they may bring, ghost kitchen-type setups mean less (or no) face time with diners, so Dayan says his team is working to forge a connection with prospective customers online via a strong Instagram presence and eye-catching, “almost fashion-like” branding. “Every last detail has been thought of in this project, similar to as if we opened a brand-new restaurant, because, I’ll be quite honest, I don’t believe that you could open a ghost kitchen, put it on Uber, and just be successful — even if you have a great menu. People need to gravitate toward it,” Dayan says. There’s no doubt the association with the longstanding sushi success of Ryú will deliver an added boost.