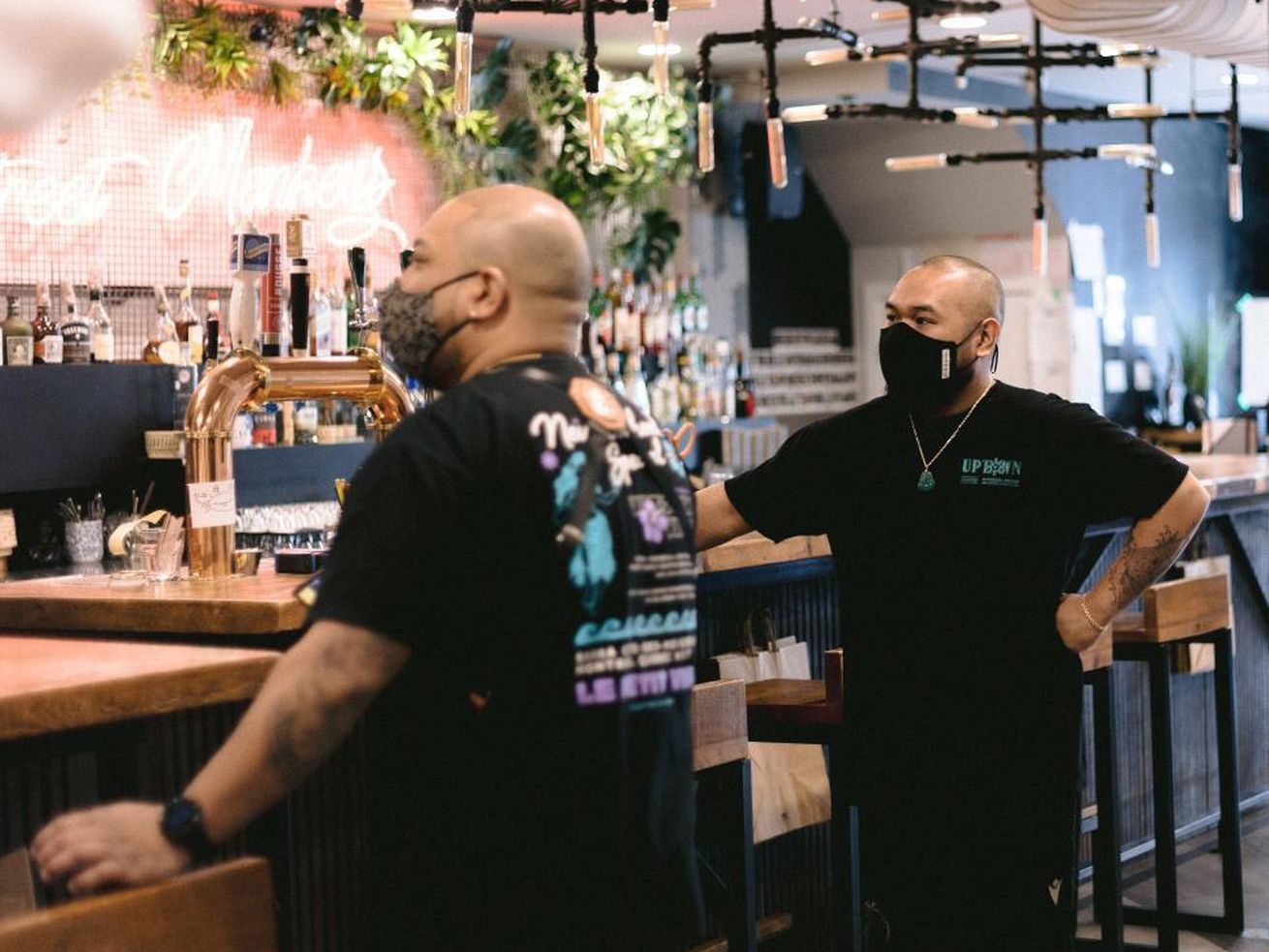 With bars being somewhat scant in Westmount, the Montreal neighbourhood has more of a reputation for being a quieter side of the city than a nightlife destination.

That’s something the incoming restaurant Tadhana is looking to change on one of its street corners: The new project from Eric Lazaro Magno and Ryan Oabel is the latest in a slew of new developments for the pair, including moving Le Petit Vibe to the downtown food hall Le Central and opening the new Filipino sandwich counter Sanwits.

Tadhana, on the other hand, stands out for how it’s been stuck on a back burner since the pandemic first began. “Ever since Le Petit Vibe, I wanted to do something like this,” Oabel told Eater in an interview. “My purpose as a chef has been to introduce the city to Filipino cuisine.”

With a primary focus on serving what Oabel calls modern Filipino cuisine in tapas-style services, the 30 seats upstairs will be accompanied by a 25-seat bar downstairs fashioned after a speakeasy (though no password will be required to enter): While serving wine lists in addition to cocktail recipes care of Oabel’s partner Nicole Ashley Cabasag—think unfussy mixtures of rhums and brandies with fruits juices like mango or lychee, or coconut milk—DJs and live musicians will play out of a booth fashioned to look like a bahay kubo, a stilt house that’s indigenous to the Philippines. The walls will be adorned with murals by Filipino artist Danny Rebel, complimenting an interior design by Allan Matudio that looks to freshen up the spot that once housed a Portuguese churrascaria named Boss Grill.

For Oabel, it’s the best of both worlds. “We love to drink in the Philippines, and whenever we do, there’s always some food on the table, chicharrón, fried pork belly, whatever,” he says.

Le Petit Vibe—originally opened in 2019—was a chance for Oabel to spread his experimental wings in the kitchen further, COVID-19 forced a flip to comfort food.

That’s made Tadhana (the Tagalog word for ‘destiny’) a whole new opportunity for the chef to share his Montreal-born, Filipino-bred culture through food. “I don’t like to use the word fusion,” the chef says. “This is about flavours that I grew up with and me putting my edge to it, where it’s family recipes focused into tapas.”

It comes down to a combination of Oabel’s experience and tutelage from a French culinary school background with his approach to traditional sauces and using different starches for the base of a dish instead of the standard rice.

Diners can expect dishes that are both familiar and an induction to new flavours: Salmon tartare is infused with a tamarind-rich sinigang fond and served with a fried nori rice paper cracker instead of the usual taro chip; a savory kare-kare peanut stew has been turned into a ribeye sauce and is served with a shrimp compound butter; arroz caldo, a rice porridge similar to Chinese congee with the Philippines’ Spanish influence, gets tweaked from the use of bone marrow; a more traditional Filipino pinakbet of sautéed vegetables is puréed and forms a thick base for a cauliflower steak dusted with a shrimp paste powder.

While excited to develop a community with the neighbourhood and attract Montrealers to Westmount, Oabel says Tadhana won’t lose sight of its purpose as culinary destination above all, pointing to the above dishes as evidence.

“It’s a place for people to discover Filipino food first,” the chef maintains.

Tadhana is slated to softly open on April 30 at 4 Somerville Avenue.