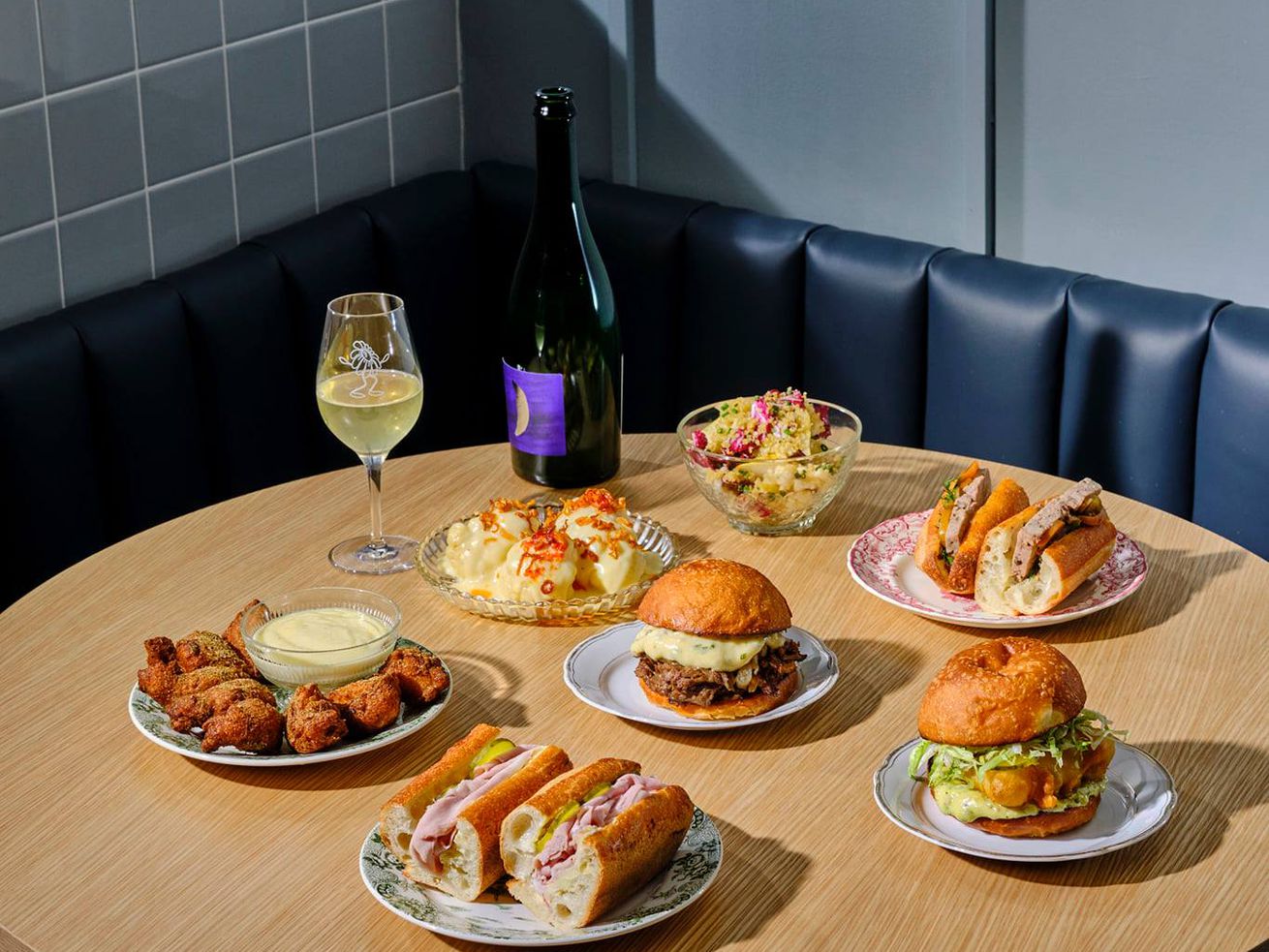 The minds behind now-defunct Mile End taqueria Maïs and summer alleyway restaurant Parasol are moving ahead with the belated opening of their new project, tomorrow, December 1: Beau Temps was intended to be a neighbourhood wine bar, but for the time being, will function as a gourmet sandwich counter.

“We’ve been working on this since January 2020. After closing Maïs in December, the goal was to renovate the whole space and launch a brand-new project with a brand-new menu at the end of March, but, with the pandemic, we’ve been waiting ever since,” says William Saulnier, one of Beau Temps’ three owners, and a sommelier by trade. He’s joined by chef William Cody and Peter Popovic, who also owns nearby pizzeria Magpie and Sparrow bar. The trio landed on the name “Beau Temps,” meaning “nice weather” in French, to coincide with their initial plans for a spring 2020 opening.

However, spring came and went, and during the summer, the team decided to concentrate their efforts on their other venture, Parasol, a seasonal wine bar and lobster shack located in a converted garage behind Maïs (now Beau Temp). They had aimed to switch gears to launch the new venture in October — but, then, dining rooms were forced to shut down once more.

With what was meant to be a 28-day lockdown now tentatively prolonged until January 11, for a total of 103 days, Saulnier, Cody, and Popovic have decided they simply can’t wait much longer. “At this point, we don’t really think restaurants will even reopen in January — they’ll just keep pushing it back. So, we need to get working. It’s been almost year we are waiting, so now we took the decision to open as a takeout neighbourhood counter,” Saulnier says. “This is the pandemic version of our restaurant.”

Sandwiches make up the bulk of their pandemic offering, owing to the team’s plan to cater to the neighbourhood’s lunchtime crowd, largely buoyed by the Ubisoft building a couple doors over. “We’ve been hanging around here every day, and we see that there are still a lot of people on the streets looking for lunch options,” Saulnier says.

At Beau Temps, they’ll be able to choose from five sandwiches: chicken liver pâté; jambon beurre, with ham supplied by Aliment Vien down the street; fried fish with tartar sauce (a throwback to the summer’s lobster shack); egg salad; and brisket, with bread from St-Hubert Street gourmet grocer Conserva. “We tried to include products from friends that have shops in the area, so we can help them out in the process, too,” Saulnier says.

Decadent sides, like cauliflower with Mornay sauce and puréed and then deep-fried potatoes served with a side of mayo, and some fun takes on mainstay desserts, like chocolate mouse and meringue, round out the offering. While picking up their food order, customers can grab a bottle of natural wine at the counter, too.

As for the space, it has been made over by Studio Knowhow founder and designer Mathieu Leclerc (also responsible for the designs of Jun I and Café 8 oz) and outfitted with different hues of blue for the leather banquettes, wall paint, and tiling.

“Maïs was around for seven years, and when it comes to restaurants, that’s a pretty long time. We knew we either had to breathe new life into it or scrap it entirely and start something new. And that’s what we did,” Saulier says.

Hampered by the effects of the pandemic, they’ve had to adjust accordingly, but Saulier says, they are still holding out hope that they can officially open their new dining room in the spring of 2021: “That way, our name, Beau Temps, will carry the same meaning — just one year later.”