As the seasons change, it’s a chance to flip the page on our collective menu and welcome to our tables some of the finest winter foods Ontario has to offer: Wild rice, local duck, ice wine and, of course, the iconic BeaverTail. Read on for the backstory behind these seasonal eats.

To understand what wild rice is, you first have to understand what it is not: “For starters, it’s not rice at all,” says Marc Bohemier, co-founder of Tea Horse, a Thunder Bay-based purveyor of wild rice and premium teas. “It’s actually a marsh grass grain, the only domestic grain in North America,” he continues, calling it the “original superfood” for its high protein and high fibre content. “It’s the caviar of grains,” adds his wife and business partner Denise. “I’m Ojibwe, and in my language, we call it ‘manoomin,” which loosely translates to ‘the good grain.’” Found growing in marshes and along the banks of lakes and slow-moving rivers, wild rice is believed to have been a food source for Indigenous peoples for thousands of years, harvested by canoe in the early fall. While it’s primarily found in more northern parts of the province now, it was once found in southern Ontario too. It is, for example, how Rice Lake near Peterborough got its name.

The second thing wild rice is not, say the Bohemiers, is the mass-produced stuff you can buy in big supermarkets. “That is not truly wild,” says Marc, pointing out that much of it is grown in paddies in California and harvested by combine, like you would wheat on the prairies. “It’s like me calling my Labrador a wolf. That’s not wild rice. It’s tame rice.” (Actually, tame grain.) It’s a far cry from the wild rice they source, which they sell by itself or as a part of a line up of three teas, riffing on the Japanese gen mai cha, which traditionally blends green tea with brown rice. “Our wild rice is directly sourced from Indigenous harvesters in northwestern Ontario,” explains Denise. “That means it’s naturally organic, non-GMO—and we’re helping to preserve food sovereignty for Indigenous people.”

They sing the praises of wild rice’s diversity, both in tea or in salads, soups, puddings or just on its own as a snack. Its nutty flavour also makes it a pretty great substitution for bacon in vegan cooking. And if you want a properly Canadian option: “Take warm wild rice,” instructs Marc, “and add a handful of wild blueberries, with a drizzle of maple syrup. That’s over the top good.”

It’s like a scene captured in a snow globe: Skating along Ottawa’s Rideau Canal, you glide up to one of four BeaverTail stands along the skateway and devour a hot, freshly made pastry.

“In my mind, there is no more quintessential Canadian experience,” says Jantine Van Kregten, director of communications at Ottawa Tourism. “Especially if you order from the BeaverTails that’s closest to downtown Ottawa, where you’ve got views of Parliament Hill, the National Arts Centre, and the Fairmont Chateau Laurier hotel. It’s just a postcard of Canadiana.”

The BeaverTail itself was actually born about an hour and a half away from that spot, in a small town called Killaloe in the Ottawa Valley. Picture it: the year is 1978, and Pam and Grant Hooker have decided to serve up an old recipe his grandma used to make at their local fair. It was a runaway success, and by 1980 the couple had opened their first permanent store in Ottawa’s Byward Market. Fast-forward to 2020, and their chain has gone international—there’s even a BeaverTails location in Dubai. The founders have retired, their business taken over by one of their first employees.

While there are similar deep-fried, doughnut-type desserts—elephant ears, for example, and even funnel cakes could be considered a distant relation—the Hookers were the ones who saw the branding potential in naming their creation after Canada’s national animal. “Although that does make for some funny conversation with visitors,” notes Van Kregten. “They usually are polite and try to smile, but you can see they’re horrified at eating the tail of a beaver. We have to clarify that this is, in fact, a vegetarian dish, and that no beavers were harmed.”

Cinnamon sugar BeaverTail remains a classic, but the deep-fried dough can be a vehicle for all kinds of flavours these days. “My husband loves garlic butter and cheese,” says Van Kregten, although she maintains that feels like a kind of sacrilege to her. “The messiest is definitely the maple butter, because it’s the ooziest when that sticky syrup hits the hot dough fresh off out of the fryer.”

It’s not a dainty snack, she concludes—but that’s part of the experience. 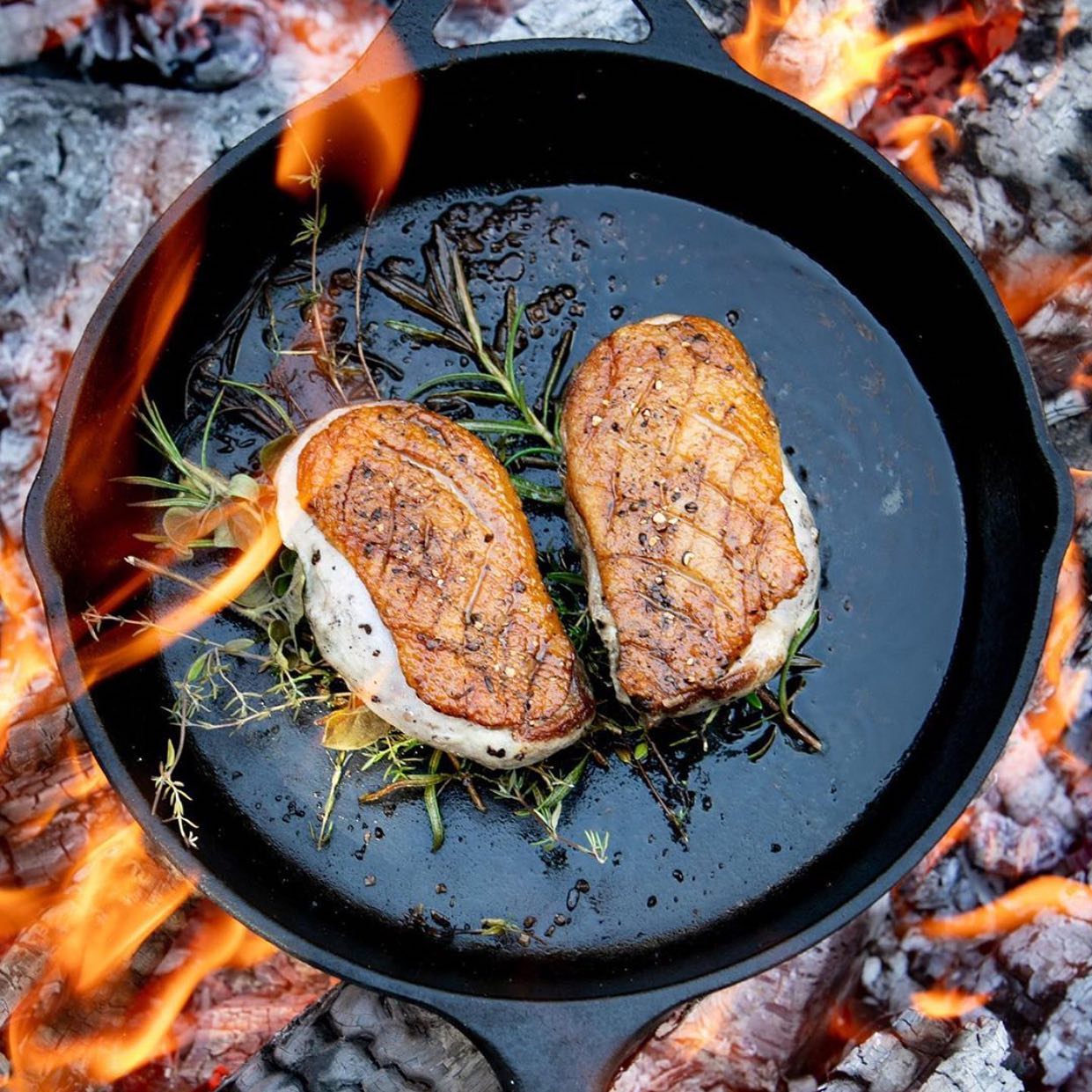 For over 70 years, Patti Thompson’s family has been raising ducks in Stouffville, a picturesque town just to the north of Toronto. “Everything is sold but the quack,” she exclaims—and she’s really not exaggerating. King Cole Ducks’ flocks are “raised with close care and attention to humane handling and welfare,” she notes. They’re bred, hatched, raised and processed right on the farm, with the resulting products being sold locally and around the world. Their feathers go into down pillows and duvets, and the manure ends up as compost for lawns and gardens.

Along the way, Patti and her family are on a mission to move duck from an exotic, restaurant-only treat to a protein we might consider on an everyday basis. “We are seeing a surge in interest in our delicious poultry,” she says, pointing to the advent of cooking shows, more diversity in our communities and the rise of the home chef. While she maintains duck can be a great summer food (King Cole Ducks’ prepared items include a popular smoked duck salad and crispy duck wings), Thompson does say sales of the birds surge around Thanksgiving and during the holiday season. This year, she expects to be even busier. “With smaller gatherings, a duck is the perfect size,” she says, “and its rich, flavourful meat matches well with harvest veg.” FYI: A whole roasted duck serves three to four, so portion accordingly.

If you are thinking about putting duck on the table this year, Thompson suggests beginners start with either some of their prepared products, like the confit duck legs sold at their farm store, or ease in with a gateway product, like duck fat, which she dubs a “life-changing” addition to roasted potatoes. For the more advanced, try what she calls “duck steak,” which the rest of us might know as seared duck breasts. “If you serve it medium rare,” explains Thompson, “it has the texture of tenderloin, with the added bonus of crispy duck skin.”

When you think of Ontario’s winter wine, chances are your tastebuds turn to ice wine. But while this tipple has become an almost ubiquitous treat, particularly around the holidays, you can’t underestimate what it did to put Ontario vintages on the map thirty years ago. “In 1991, Inniskillin, a Niagara-region winery, really shocked the world by winning the grand prize at Vinexpo, a huge wine competition in France, for their 1989 Vidal IceWine,” explains Erin Henderson, a certified sommelier and founder of The Wine Sisters. “That put Canadian wine into the spotlight, where before nobody had really thought of us.” 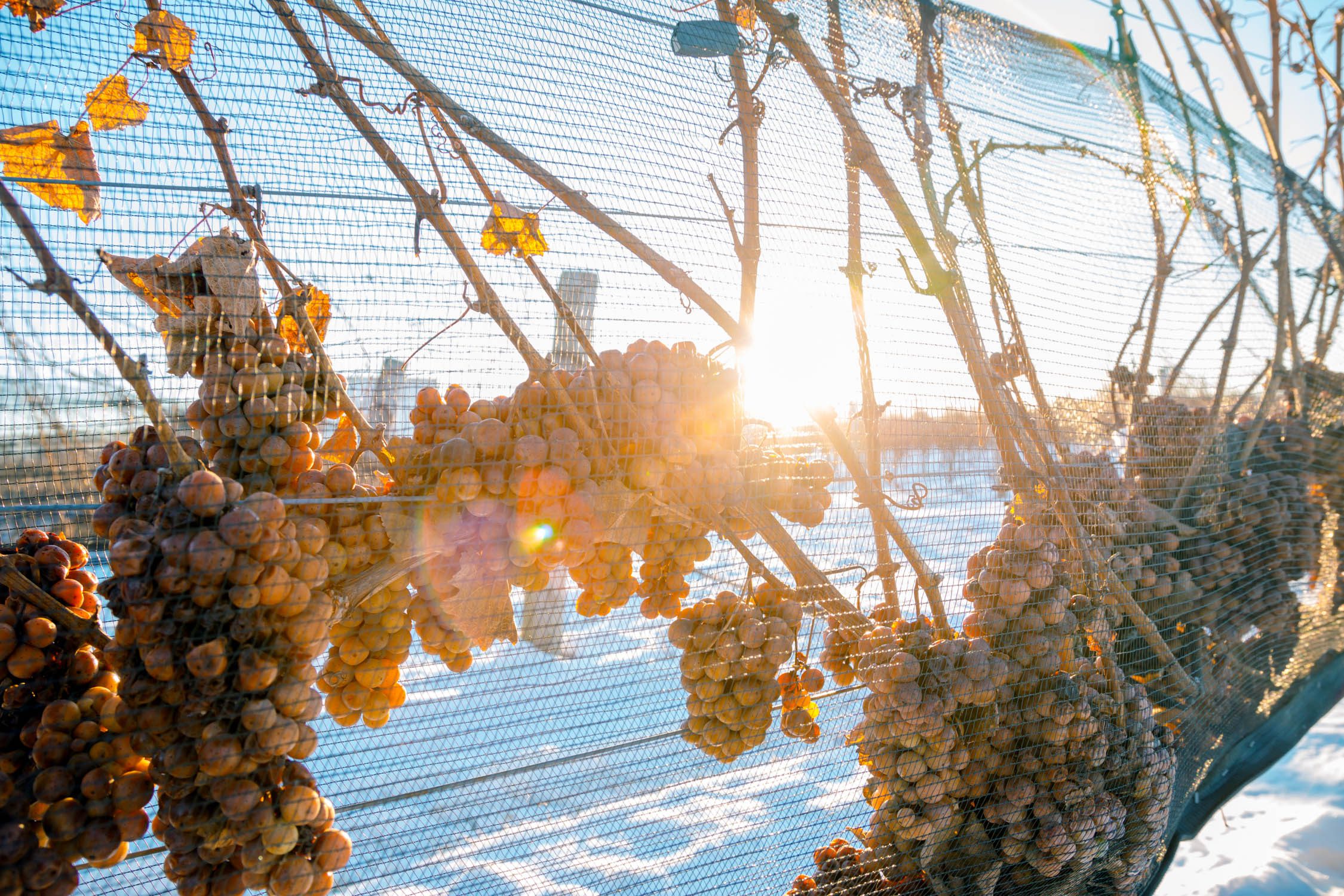 While ice wines, the lore agrees, originated in Germany in the 1700s, the specific microclimate in Ontario, where it both gets warm enough to grow grapes and cold enough for those grapes to reliably freeze each year, makes it an ideal place for this product with global appeal. It’s also the reason you may have raised your eyebrows at the bottle price tag. “The reason IceWine is so expensive is because it’s actually a really challenging product to make,” explains Henderson, detailing a process that is as precise as it is tightly regulated by the Vintners Quality Alliance.

First, the winery selects which kind of grape they’re going to make their IceWine with—vidal or riesling are the most popular—and then they leave them on the vines long after the rest of the crop is harvested, netted to protect them from hungry birds and animals (and fingers crossed that disease or rot don’t set in). Then, it’s a waiting game for the first intense cold snap, which can happen as early as November and as late as February, but usually hits in December or January. “It’s the law that it must be at least -8C,” says Henderson, noting that most winemakers wait for it to be -10C or -12C. “Some will even wait for the grapes to freeze, thaw and freeze again to increase the flavour complexity,” she adds. To ensure the temperature is below the -8C threshold the entire time, this harvest usually happens in the middle of the night, the workers bundled against the cold to hand pick the precious fruit.

The grapes are then rushed to the processing facilities, where they must remain frozen while being crushed. The cold shrivels the fruit to the size of raisins, meaning each grape yields just a “single drop of golden nectar,” as Henderson describes it. “You’re getting about 15 percent of what you would have extracted had those grapes been fresh.” The result is a concentrated flavour that’s sweet (up to 200 grams of sugar per litre compared to the 12 grams you might find in a dry white) but, crucially, balanced by a high acidity. “It’s like biting into an orange,” explains Henderson. “It’s sweet, but balanced.”

It’s best served slightly chilled, advises Henderson, in the small kind of glass you’d use for sherry or port. In terms of pairings, remember the golden rule: “Your food must always be less sweet than your wine, otherwise the wine will taste bitter or flat.” For a red IceWine, a brownie or lava cake makes a great accompaniment, while a white IceWine pairs nicely with a creme brulee. “But don’t limit yourself to sweetness,” encourages Henderson. “It’s seen as a dessert wine, but IceWine is beautiful with something salty, like a blue cheese.”