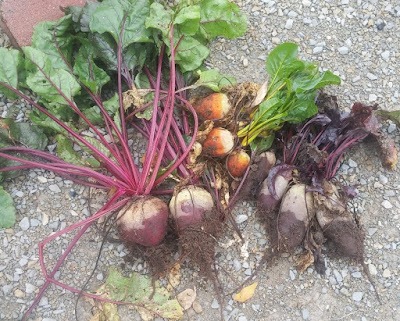 We grew three types of beets this year, along with a few MacGregor’s Favourite. They are, from left to right above, Kamuolini 2Boldor, and Cylindra. While this was a difficult year for many vegetables, the beets did reasonably well. The intense heat and drought during germination season mostly did not faze them – the MacGregor’s were a little spotty, but the seed was also quite old – and the rest germinated well. The subsequent cooler and actually very rainy weather that prevailed suited them too, and we have a good crop. We’d have had an even better crop if we’d ever gotten around to thinning them, but we didn’t. What else is new? Let’s take a look at each one…
Kamuolini 2 is, as far as I know, only available in North America from Adaptive Seeds. This beet is the result of modern breeding (bred by Dr. Rasa Karkleliene in Lithuania). For the first half of the growing season, every time I walked by I thought, “not impressive… not impressive… not impr – WHOA!” Sometime around late mid-summer they went seemingly overnight from spindly little things to very chunky indeed, with suddenly big, sturdy leaves as well. Ours were a bit variable in size, mostly because we really should have thinned them; it would have made them so much happier. Those big, sturdy leaves are actually quite tender and while strongly flavoured (as usual with beet greens) they were very tasty. As advertised, this is a great beet for lovers of the greens. The root was was extremely sweet and good flavoured as well. They cook up a darker red than you would think from the colour of the skins when first picked.

Boldor: My impression as these were growing was that they were also not doing impressively well, and indeed they are the smallest of the beets we grew. However in the end they are big enough, and probably plenty big for most people’s uses. The ones in the photo are about average supermarket beet sized, which tells you about the other two. The leaves seem small and sparse, but they are not as sparse as they look – they die down fairly rapidly to be replaced by new ones, so their live leaves are always clean and nice, if few. These were probably the most unhappy about not having been thinned, and we did end up with quite a number too small to use. Boldor is a fairly recent beet, bred by Bejo, and is marketed as a replacement for Touchstone Gold, which has been the most popular yellow beet grown around here. We’ve grown Touchstone Gold, and thought it a nice beet, although it’s always been an iffier germinater and smaller than most red beets. So, is Boldor actually better? It did seem to have a better germination rate, although we were not doing a side by side comparison so it’s hard to say for sure. The skin is an amazing glowing orange, brighter than Touchstone Gold, but the inner flesh is less gold and more of a clear yellow when raw. It did cook up more of a golden shade. Certainly, it’s very attractive. Some vendors seem to want to describe it as a hybrid, but it is open pollinated. We tried cooking some of those sparse and delicate-looking leaves, and found they were stronger (more bitter) and tougher than the Kamuolini 2 leaves, so this is not a good variety for greens. We thought the beets themselves tasted very nice; not as sweet as Kamuolini 2 but rich and well-balanced.

And finally, we grew Cylindra, (sometimes known as Cylindrica or Formanova) which is a Danish heirloom, introduced to North America in the 1890s. We’ve been growing them for a few years, and in many ways they are my favourite beet. I really like the elongated, narrow shape, and they get to a good size. The narrow shape means they still cook in the same amount of time as smaller regular beets. They grow about half in, half out of the soil, so you can always find the ideal one to pull. The leaves are a pretty purple, larger and not quite as dark as the MacGregor’s Favourite, but not so large as all that. The leaves are milder than either of the other two beets and noticeably the most tender of the three. Still, they lack the rich flavour of the Kamuolini 2. They are the most tolerant of any beet we have grown of our tendency to leave them un-thinned. Their shape makes them ideal for pickles. They are less sweet than many beets – certainly much less sweet than the other two we grew this year – but I don’t consider that a flaw; I think they are very nice plain and being a little less sweet makes them more versatile for use in recipes, I think. In short, their widespread availability and popularity has been well-earned.