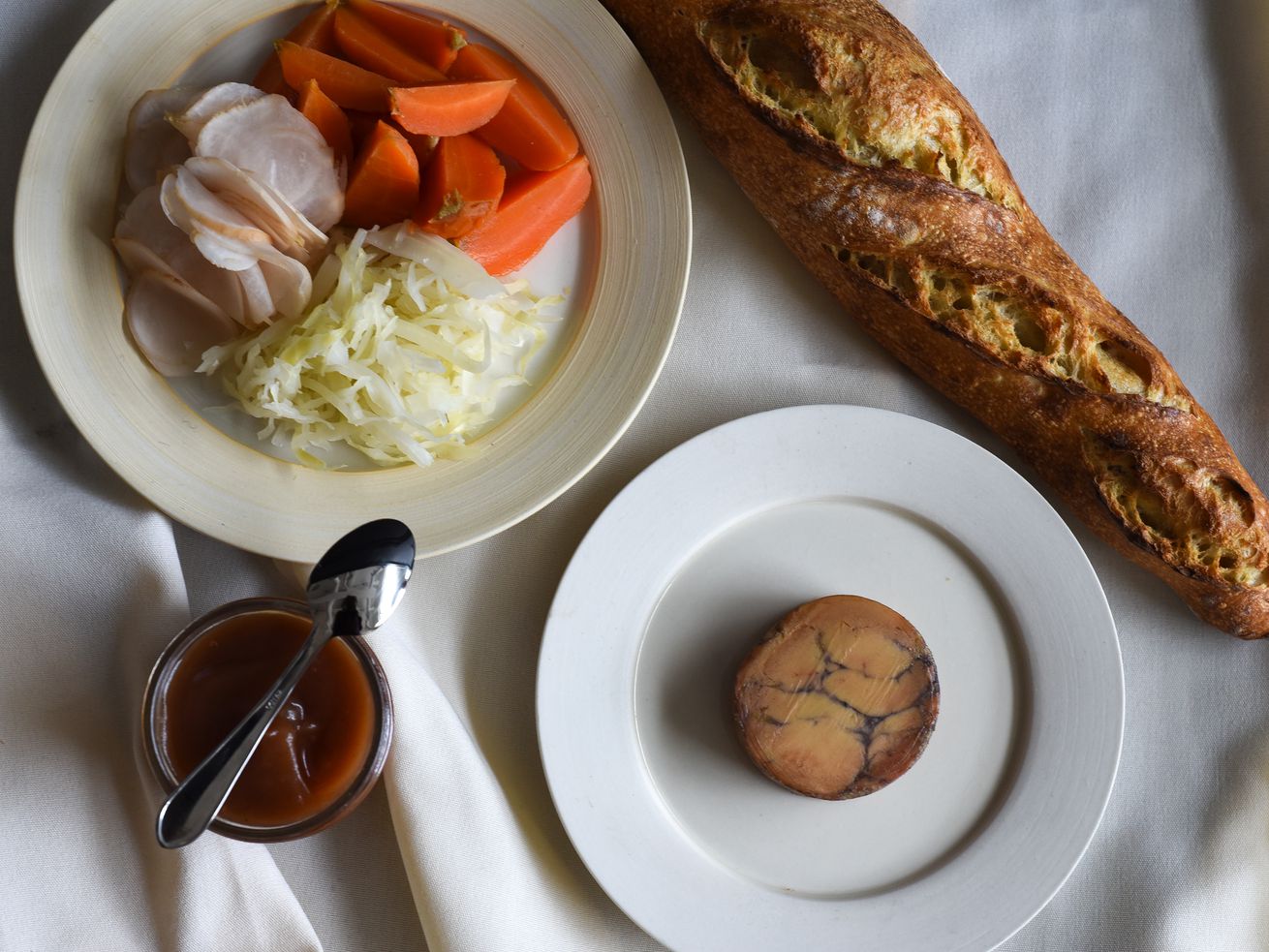 A new French bistro landed in Westmount a couple weeks ago, helmed by a small group of alumni from Old Montreal’s Pastel, an establishment lauded for its creative take on the tasting-menu-plus-wine-pairing format. But elaborate 10-course dinners are not what Bistro La Franquette’s owners have in mind.

“All of that was really fun to do, but ultimately it just wasn’t me,” Renée Deschenes, the head of drink (and pretty much everything else beyond the kitchen purview) says. Co-chef Louie Deligianis agrees: “It’s just not really what we felt like we should be doing at this point in our lives.” The last member of the triad is Blake Hickerson, the other chef and the one behind the bistro’s daily baked breads.

Instead, what they are doing at the Victoria Village bistro is an all-day menu of ready-to-go meals like sandwiches and soups, a small market of pantry staples and produce sold by the pound, and a pared-down dinner offering, consisting of two choices of each starter and dessert, and mains ranging from Cornish hen with glazed carrots, lentils, and cabbage rolls, to cacio e pepe fettuccini.

For the holidays, the team is assembling baskets filled with smoked salmon, foie gras, a pâté encrusted in a flaky, tourtière-like crust, and a series of accoutrements, like pickles, onion jam, and apple butter. Ginger snaps and himrod grape pâte de fruit cubes make for a sensible dessert finale.

In addition to working together at Pastel, the trio previously collaborated on a series of one-off pop-ups on their down time, which came to be known as Baby Duck. “So this whole thing has really been percolating for I’d say about four years now,” Deligianis says.

Now, they’ve landed in a 1,000-square-foot-space on Victoria Avenue that had previously belonged to Kwai, Antonio Park’s Thai restaurant, and before that Lavanderia, his Argentinian venture. (Park’s eponymous sushi restaurant is also on the strip.)

“It’s a pretty good location with a lot of foot traffic and visibility,” Deligianis. “We had looked at Verdun and a couple other neighbourhoods in the Southwest, but those didn’t necessarily have the same draw that Westmount does in terms of people walking around. The last thing you want when you are opening your first restaurant is to be worried about how people are going to get to you.” Close proximity to Sherbrooke Street and Vendôme metro mean that isn’t an issue for Bistro La Franquette.

Once dining rooms reopen, the market will be replaced with tables and chairs (45, at pre-COVID capacity), and the menu will change — a lot, Louie says. “Right now, we’re just trying to keep everything simple and not get too ahead of ourselves, because it is our first endeavour. That’s why we are keeping things low-key with simple, good foods like breads, and soups. It’s really back to basics, I suppose.” The restaurant’s name, after all, is derived from the French expression “à la bonne franquette,” used to signify a meal that’s informal, easy-going, or otherwise fuss-free.

A similar approach was brought to the execution of the space. “We try to do as much of the work as we can ourselves both out of principle and out of necessity,” Deschenes says. An Instagram post capturing the team hard at work on an antique hutch they hoped to restore for the restaurant supports that claim: “We didn’t know how difficult stripping it and refinishing it would be, but we couldn’t afford to pay someone to do it,” Deschenes says.

Friends have also pitched in — with photography, graphic design, the art that hangs in their still unused dining room, and even the plates that will someday carry the co-chefs’ creations. “We have been blessed with many talented friends that believe in us enough to help us achieve this crazy goal,” Deschenes says.

Bistro La Franquette is open for takeout from 11 a.m. to 8 p.m. on Wednesday to Sunday, at 374 Victoria Avenue.