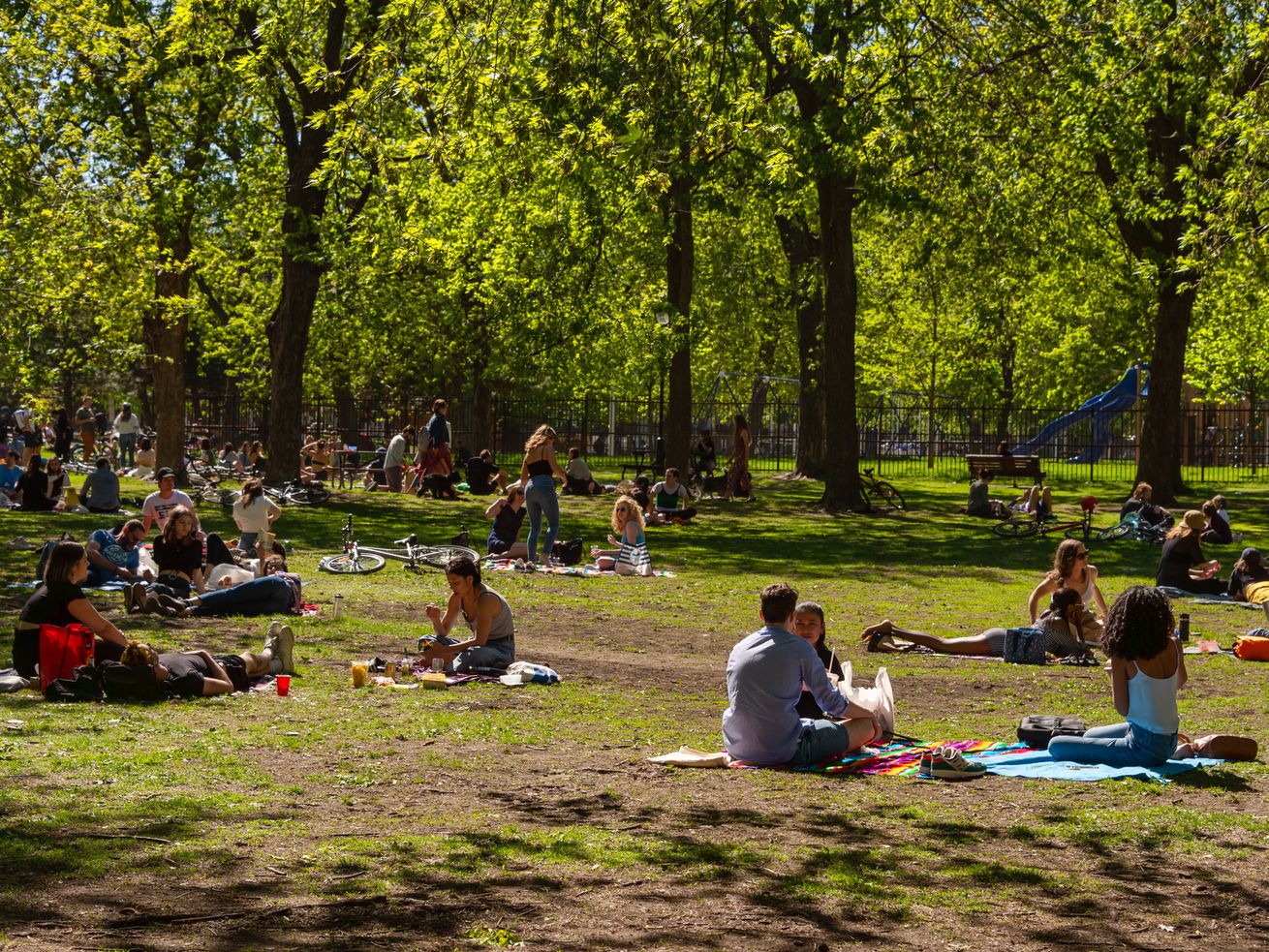 While watching one of Premier François Legault’s coronavirus press briefings last week, Sébastien Abrieu, the owner of Beaubien Street’s rooster-themed breakfast spot La Grand-Mère Poule, learned three things: more menacing virus variants continue to take hold; though the situation in Montreal remains stable, the third wave is in full force across the province; and, by deduction, his hope of reanimating his terrasse for outdoor dining might have to wait.

Abrieu and his partner Catherine Laforest had been deep in renovations turning the breakfast joint into an all-day affair, incorporating a cocktail bar and new design to match the burger-and-shakes offering they’d imported from their hit Mont St-Hilaire restaurant Shack Attakk. They’d expected a springtime terrasse would bring some reprieve as they undertook these costly changes.

“So I thought, ‘What if we could use this big beautiful park that’s right in front of us?’” Abrieu recalls. He means Molson Park, a roughly six-acre verdant space flanked on three sides by the neighbourhood’s nearly century-old duplexes and triplexes, and split in two by D’Iberville Street running in between. He went online and purchased eight camping tables that fold in on themselves, neatly sandwiching seats for four in between. By this weekend, he expects to get another shipment that will bring that count up to 30.

As of yesterday, patrons ordering from La Grand-Mère Poule/Shack Attakk can rent a table for $10. If they post about it on their social media accounts, they’ll get a gift card for that same amount for their next purchase. Some may view it as a crafty loophole to the current ban on outdoor restaurant dining, but Abrieu says he’s essentially just pairing his takeout offering with a table rental service — something he plans to continue doing even after terrasses reopen. “I’m an entrepreneur. When there’s a wall in front of me, I break it and continue to move forward,” he says. 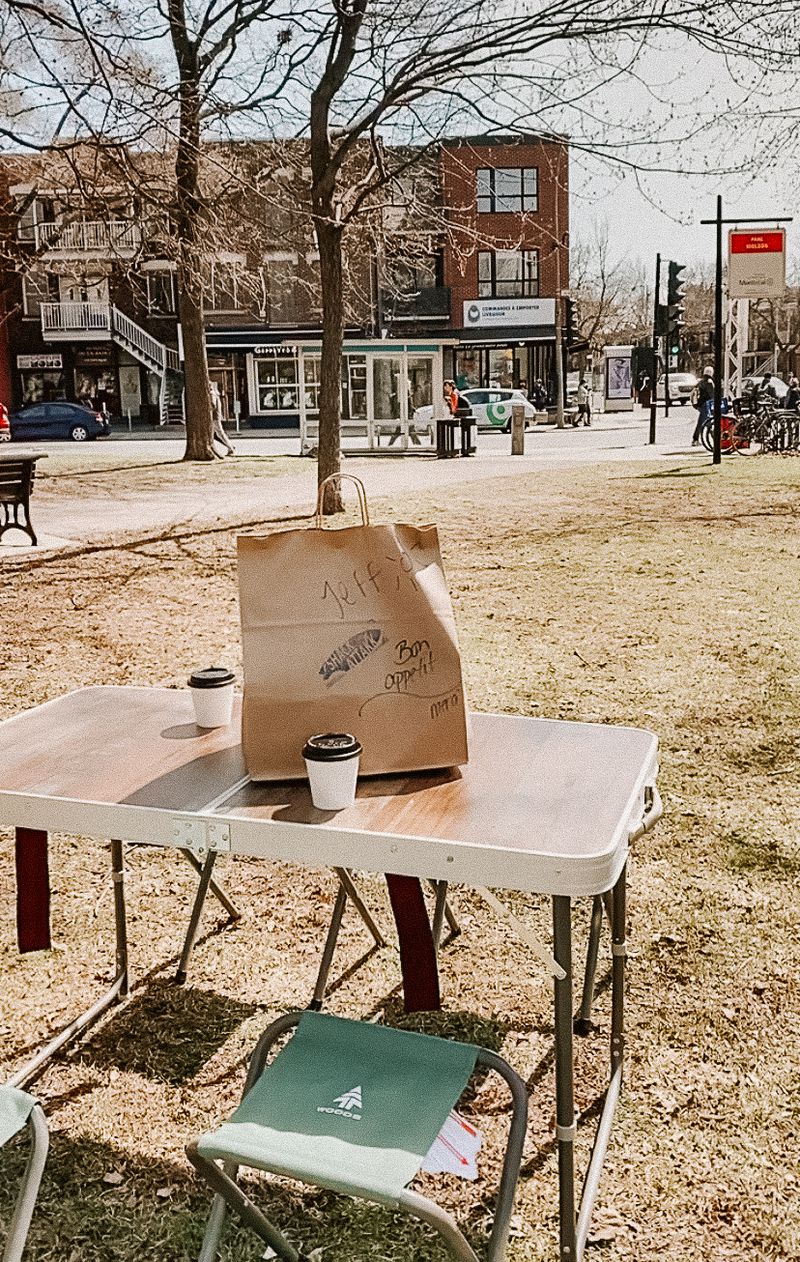 Shack Attak/SuppliedDiners can now enjoy takeout from La Grand-Mère Poule/Shack Attakk on a rented picnic table in Molson Park.While the city has announced thirteen pedestrian streets for the summer and an easing of terrasse fees, restaurants and diners remain beholden to the province’s health authorities, unsure when exactly they’ll be able to make use of outdoor dining structures. Of course, Montrealers, the passionate picnickers that they are, have been sprawled across quilted blankets and firmly planted on park benches since the first hint of warm weather coaxed them out in droves.

Last summer, another Beaubien Street restaurant, Moroccan-leaning Darna Bistroquet, also had the idea of tapping into the city’s picnic culture, made all the more central to community life with the spectre of an airborne virus. The restaurant delivered sandwiches and apéro boxes to eight parks, including Jarry, Laurier, and Maisonneuve, and the hope is to revive the service come May, while expanding its reach to all major parks in the metropolitan area — should the weather stabilize and guidelines from health authorities continue to allow it.

“It’s part of the business model now,” Amer says. “And to be honest, it made our summer last year. We had a terrasse, but our sales on these deliveries outsold it.”

Amer plans to add grilling items like lamb ribs, Merguez sausages, and marinated halloumi to the menu, as well as accessories like coolers, bottle openers, and woven Moroccan throws, which the restaurant would come collect after each use. 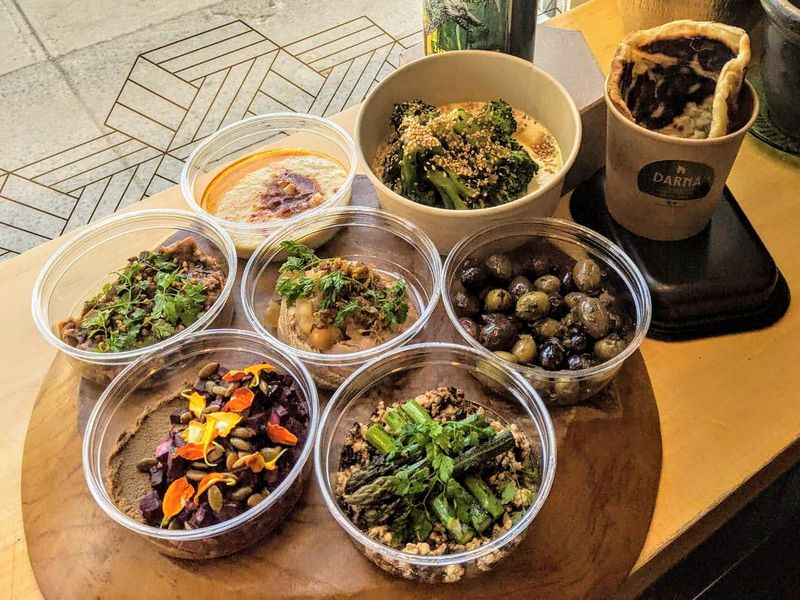 Darna Bistroquet/SuppliedDarna’s apéro boxes were delivered to eight Montreal parks last summer, and plans to further expand its reach this year.Bar Mamie, another Beaubien Street establishment, took advantage of last weekend’s summer-like weather with the launch of a similar service delivering charcuterie, cheese boards, and wines to Laurier Park. Though the decision to debut last week was spontaneous, the team had been thinking about it since the first lockdown, after noticing customers were stopping by for supplies before heading to the park.

Co-owner Max Rosselin says the plan had been to launch a fancy website and QR code for the offering, but when the sun came out early, they’d decided to take a less formal approach: They posted on Instagram and had diners place orders by phone; if the demand was there, they could always invest in something a little more official. Mamie was soon heading to the park for hourly drop-offs, coordinating with customers via text before their arrival.

For all of their resourcefulness, the above restaurateurs nonetheless wonder what responsibility they have after equipping diners with everything needed for a good time. Rosselin says in one case, someone placed an order for a couple bottles of wine too many, and he considered inquiring about the size of their gathering. Amer wonders if restarting the service could be seen as “inciting people to eat outside when the government is trying to get us to limit contact.” Abrieu is a little more matter-of-fact: “I can’t be the police. Whether they have my table or not, they are going to eat in the street, the car, the parks, wherever.”

The consumption of takeout in parks would seem to keep restaurant workers farther from harm’s way than they would be in a terrasse scenario where they — decked in protective gear, though largely still unvaccinated — are surrounded by others who are mask-less while eating. But, according to Nicole Turcotte, co-owner of Montreal’s true picnic pioneer Dinette Triple Crown, the risks remain high enough that the Southern restaurant is opting to forgo its wicker-basket-and-gingham-blanket offering until all staff are vaccinated. “There are still too many variables to do the service safely, not to mention we don’t want to add encouragement to the huge groups gathering in the parks that so rarely look spaced 2 meters apart,” she says.

Dinette Triple Crown put the service on hold last year too, the first time since opening nine years ago, when it was, to their knowledge, the first to offer a picnic setup in the city. “It was such an integral part of our identity, not just a pivot,” Turcotte says, adding that she sometimes worries her restaurant’s rigorous safety precautions may eclipse its prior accomplishments. “But we just need to hold our breathe for a little longer and keep focused to come out the other side of all this — picnics and all.”