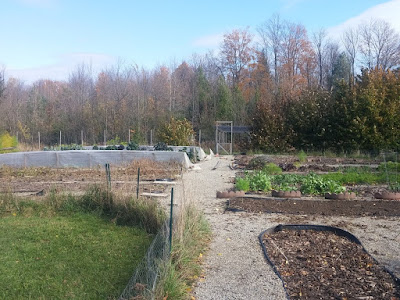 This photo is from Wednesday, which looked like the last nice day to stroll around with a camera. The garden looks neat and ready for winter, which it mostly is. I’m sure we could find another 2 weeks worth of work, supposing the snow holds off that long.  Still have the annual cleaning of the garage to do too ughhhhh. We agree we are very ready to finish gardening for the season. 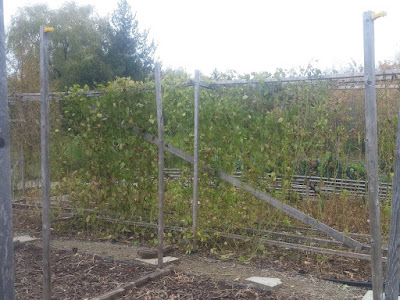 This was last week, just before we took down the last of the bean trellises. The Lima beans really didn’t want to finish, but too bad; we were done with them. They are shelled and finishing drying in the food dryer as I type. We did get quite a good crop of them this year; much better than last year when we barely got enough for seed. 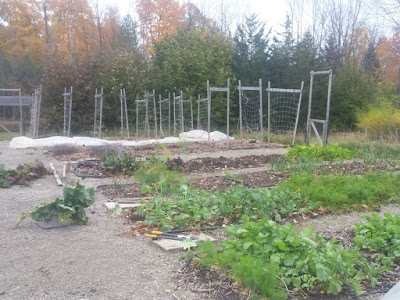 Mr. Ferdzy has worked on taking down the trellises as I pulled beets, rutabaga, and winter radishes. 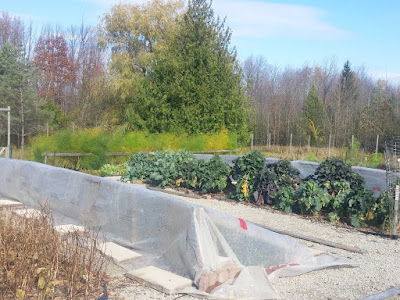 Portions of the trellises plus two sheets of the 6 mil vapour barrier that we use as hoop-house covers got re-used to cover the spinach and lettuce that we hope will overwinter and get us started with some greens in early spring.

You can see the new asparagus bed in the background, still turning colour. It’s interesting; the old asparagus bed was a good week behind the new one in emerging, and it turned yellow at least a week before the new ones. Micro-climate differences clearly demonstrated; moving the asparagus was a very good idea.

Our Brussels sprouts look much better than they are, but they are not too bad. We’re going to have some (have already had some, in fact). 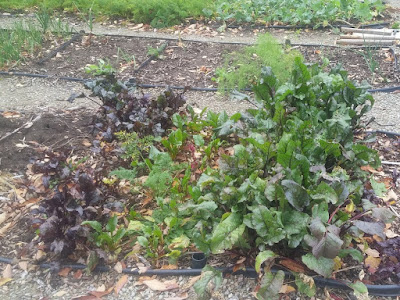 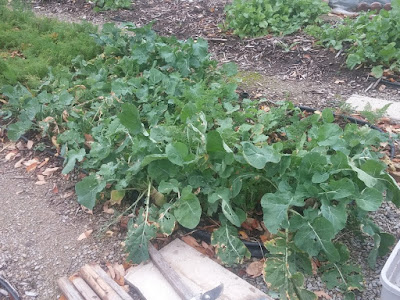 Our rutabagas are nowhere near as good as the foliage suggests; still we also have some that are big enough to eat and are already eating them, as well as having a sack of them stashed in the vegetable fridge. (Some people have a beer fridge – we have a vegetable fridge). 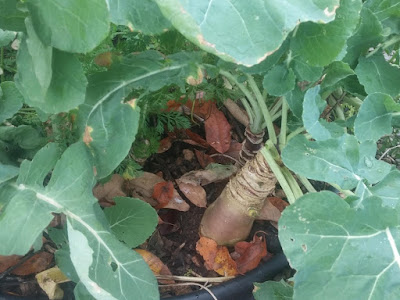 That’s a fairly typical one – long and skinny compared to the ones you can buy… how do they do it, I wonder? Lots of fertilizer no doubt, and better soil generally. 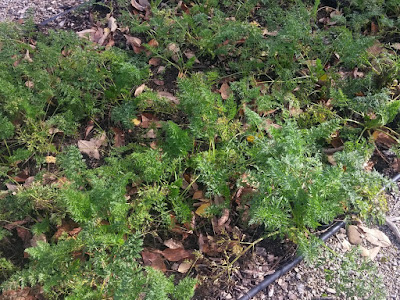 Carrots remain to be pulled for storage. We don’t do that until the last possible moment before the ground freezes; until then we pick them more or less as we need them. It looks like a better year than most for them, partly because they liked the weather, and partly because we do get better at growing them. 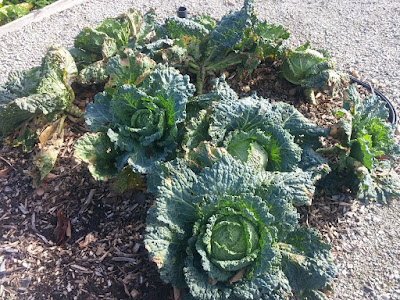 We have a few cabbages picked and in the fridge, but this particular kind is a cross between January King and Chieftain savoy. It will stand in the garden and can be picked even if frozen. We assumed this was normal, and left another variety out after first frost last year, only to discover they couldn’t stand it, and rotted. Oops!

Some of our cabbage looks pretty good, but we can see the effects of the swede midge which is now infesting our brassicas, and some of it looks pretty terrible. Our cross did fairly well, which is nice. 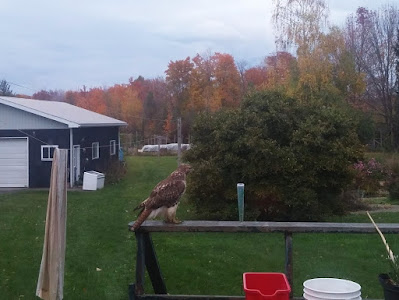 And finally,we had a visit from this bird last week. I spotted it while washing the dishes after dinner, and it stayed there long enough for us to call Mom over and all watch it for several minutes before it flew away. I’ve been seeing a red-tailed hawk in the birch tree quite often this summer; I suppose this is the same one. Perhaps we have them nesting nearby. That’s kind of fun! I don’t think the resident crows particularly approve. Hawks will steal their eggs and babies. It’s hard to feel too sorry for them, though, since they are not above nest-robbing themselves.