I’m always very interested in the history of food, and seeing how dishes have evolved over time. I found this recipe here, and realized it was a modern take on the ancient British pease pudding, also long popular in Newfoundland. A number of old boiled or steamed dishes have made the transition to the oven, as it became more common for people to have an oven at home (this has by no means been a typical feature of life, until the last hundred to hundred and fifty years).
We liked this quite a lot. It’s fairly plain (do be sure to put in enough salt – like a lot of pea and bean dishes, it soaks it up and it disappears) but it would certainly lend itself to a variety of seasonings. We started off by eating it cold, as suggested at Stuffed at the Gills, and pan sautéed  the leftovers and had them hot. Nice both ways.
As usual, I have made a few changes; mostly to omit sugar and replace carbs (I used oatmeal instead of breadcrumbs, which worked very well.) 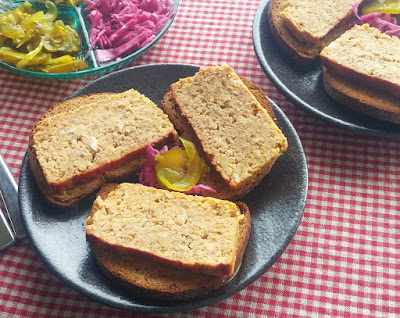 Cook the Peas:1 cup yellow split peas1 teaspoon salt2 cups water
I cooked mine in the Instant Pot for 7 minutes, letting them decompress naturally. You could also cook them on the stove in the pot, in which case you will need more water. Stir regularly and cook them down to thick sludge over medium-low heat.
Make the Loaf:1 medium onion 1 1/2 cup bread crumbs OR 1 cup quick-cook oatmeal
2 teaspoons rubbed savoryfreshly ground black pepper to taste
1 teaspoon salt
2 large eggs1/2 cup tomato sauce1/2 cup tomato sauce, ketchup, or a mixture
Preheat the oven to 350°F. Oil a 9″ x 4″ baking pan, or line it with parchment paper.
Peel and chop the onion. Put it in a mixing bowl with the cooked peas, the bread crumbs or oatmeal, and the seasonings. Mix well and adjust the seasoning as required. Mix in the eggs and the tomato sauce.
Scrape the mixture into the prepared pan and smooth it out flat. Top it with the remaining tomato sauce or ketchup, spread to evenly cover it. Bake for 1 hour and 5 or 10 minutes until firm. Let cool and serve at room temperature. It is also nice pan sautéed until hot through.